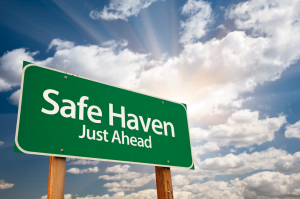 Last week I wrote about the role of technology in the complex of temptation. Research is showing that online behavior is changing. A few years ago, someone’s ranting, raving and other poor behaviors might seem just the exception. Now we are increasingly part of a world in which poor behavior online and in the public square is more the norm. And slowing becoming acceptable. Just think about the way politicians use texting and social media, not to engage a different viewpoint, but to name call, denigrate, and dismiss others. This is just part of a larger complex in which the moral compass of the nation, a community, a family and an individual are reordered.

While parents are trying to teach and give an example of Christian discipleship and behavior, the kids are digitally exposed to behaviors that make the outrageous, shocking, and offensive (to one generation’s view), the new norm – and hence an evolving moral baseline – and not in a good way. And that is just in the world of what at best might be called “poor manners.” But what about pornography? Is technology aiding and abetting a reordering of the moral compass of individuals and families? I think people’s first response is “Yes, in those families and individuals wherein pornography is present” with the subtle assumption “but not my family or among my children.” Don’t be so sure. The statistics in this area are scary. Did you know average today at which a child is first exposed to graphic pornography? Age 8.

Research shows the attitude about pornography is generational. Take my generation and consider the role technology had in temptation and pornography. It had none. When I was in high school there were rumors of “a guy” across the street behind the gas station that for 25 cents would show you the foldout of Playboy magazine. Of course, no one ever saw the guy, and such was the limited access to pornography in my time. Things are different now. Technology makes it “one click away.”

In C.S. Lewis’ classic book The Screwtape Letters, a senior demon named Screwtape is trying to advise his nephew Wormwood on the best ways tempt people to their downfall. Wormwood is young and eager, more interested in the one-and-done tempting. But Uncle Screwtape counsels, “… the safest road to hell is the gradual one – the gentle slope, soft underfoot, without sudden turnings, without milestones, without signposts.”  The Screwtape Letters were written in 1942. I wonder what C.S. Lewis’ character Uncle Screwtape would advise his nephew today.

I think the advice would be that part of the gentle slope would be to let technology be the slow and sure means to introduce pornography into a person’s life. Just sit back and let pornography affect the human brain. Researchers have shown that pornography shares a number of neuroplastic brain impacts similar to drug and other addictions. They activate the reward system through different means, however, the universal result is a flood of dopamine in the brain’s reward center. The pathways to the center are different but the result is the same. This results in acute positive reinforcement of the behavior that initiated the flood. In this stage, this positive reinforcement results in addictive related learning associations. Neuroplastic changes begin to occur, however, as the continued release of dopamine in the reward center leads to an increase in dynorphin levels. Dynorphin, in turn, decreases the dopaminergic function of the reward system, resulting in an increase in tolerance. Once the dopamine flood has run its course, a kind of withdrawal occurs leading to a decreased sensitivity to previous rewards and an increase in the reward threshold (tolerance), lowering of inhibitions and emotional response. This further progresses to negative reinforcement as the individual continues to engage in the addictive behaviors to avoid the negative affect associated with withdrawal. The neuroplastic effects also impact other brain areas in the prefrontal cortex associated with motivation, self-regulation/self-control, delayed reward discounting and some cognitive functions. And all of this is only amplified in a young child.

What’s all that mean? The continued release of dopamine into the reward system when an individual compulsively and chronically watches Internet pornography stimulates neuroplastic changes that reinforce the experience, build brain maps for sexual excitement against which established brain maps for “natural” sexuality cannot compare (and in fact those existing natural pathways seem to atrophy). There are a lot more changes in your brain that could be mentioned, but its enough. Uncle Screwtape would be pleased. We have made his job easy.

What to do? At the end of Mass today we have available a simple booklet “You are Loved” that reminds each one of us that in the beginning, the middle, and the end we are loved by God – and that makes all things possible. Also, we have a webpage (sacredheartfla.org/safehaven) which offers a wide arrange of resources for us as individuals, as families, and as a faith community to begin to understand this modern-day scourge and the way it impacts the lives of individuals, couples, children, and families.

What to do next? If you know someone who needs to lay down this burden in their life, write the webpage in the back of the booklet, hand them the booklet, and let them know they are loved.