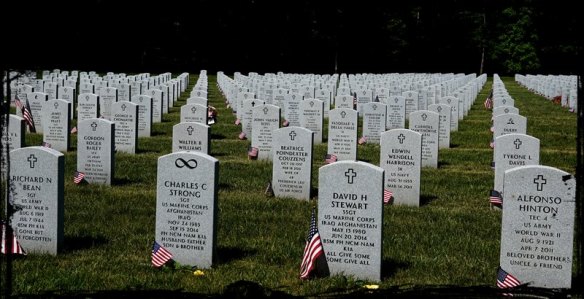 Today our nation celebrates Memorial Day. Lots of people confuse it or conflate it with Veteran’s Day. It is the latter which honors all the men and women who have served our nation in the military. It is the former that remembers and honors all those who have died while serving in the United States Armed Forces. It is a difference of which I receive weekly reminders as I am honored to serve veteran families during the internment of their loved ones at Quantico National Cemetery.

One of the current traditions on Memorial Day is the decoration of the graves of our fallen soldiers – a tradition that predates the Civil War. There is evidence that as early as 1817 it was a Philadelphia tradition to place flowers on the graves of American Revolutionary War and War of 1812 veterans. Other historical evidence points to a tradition of annual days of remembrance in the rural South. On a Sunday in late spring or early summer, notably in the mountain areas, families and extended relatives gathered at the family graveyard to honor their ancestors. These days of remembrance were marked by placing flowers on the graves, a religious service, a family-reunion-like gathering with a picnic-like “dinner on the grounds”, the traditional term for a potluck meal at a church.

Before the Civil War all the elements of a Memorial Day celebration were part of the American fabric of life. The Civil War was the horrific proximate cause of the nascent celebrations that eventually became Memorial Day as we know it. That much people can agree upon. The first celebration of Memorial Day is still the topic of research and hot debate. Some claimants as birthplace of the celebration include an 1861 Warrenton, Va., day of remembrance for soldiers who died early in the war. There was an 1862 celebration in Savannah, Ga., as well as an 1863 dedication in Gettysburg. On May 1, 1865, in Charleston, S.C., recently freed slaves held a parade of 10,000 people to honor 257 dead Union Soldiers, whose remains they had reburied from a mass grave in a Confederate prison camp. By the summer of 1865, Memorial Day-like celebrations were common across the South, joined by increasingly widespread celebrations in the North by 1868. One interesting reaction seems to be that as Northern “Memorial Day” celebrations arose, in some places in the South, the name was changed to “Confederate Day” as a way of passively resisting post-Civil War reconstruction.

Historians acknowledge the role of Ladies Memorial Associations in days of remembrance celebrations that served to preserve a Confederate “memory”. These associations established and cared for permanent cemeteries for the Confederate dead, organized commemorative ceremonies, and sponsored monuments as a permanent way of remembering the Confederate dead. The most important of these was the United Daughters of the Confederacy, which grew to nearly 100,000 members. They were quite successful at raising money for monuments, lobbying legislatures and Congress for the reburial of Confederate dead and working to shape the content of history textbooks. In the North, the “Women’s Relief Core” an auxiliary of the “Grand Army of the Republic” was the counterpart of the Southern ladies’ associations, serving as animator and lobbyist for reburial of Union dead, payment of veteran pensions and construction of monuments. They too had nearly 100,000 members.

By the 1880s and 1890s in the South, the Memorial Day gatherings became one of many activities that promoted the “Lost Cause,” an ideology that holds that, despite losing the American Civil War, the cause of the Confederacy was a just and heroic one. The ideology endorses the supposed virtues of the antebellum South, viewing the war as a struggle primarily for the Southern way of life in the face of overwhelming “Northern aggression.” At the same time, the Lost Cause minimizes or denies outright the central role of slavery in the outbreak of the war.

Meanwhile in the North, this was a period when the tone and tenor of celebrations became highly politicized as former Union soldiers, now seeking political office, retold the stories of battles and their heroism. The 1862 Battle of Shiloh, the largest one-day loss of life in U.S. military history, was retold in ways that made the speaker heroic and electable, moving the compass of the needle towards another end. The net effect was that the historic facts of the battle gave way to myth and political expediency and soon settled in to “history.” A century later the true history seems to be another lost cause.

What should never be forgotten, as a good friend and combat veteran wrote to me: “When a war starts, both sides think they will win, and one is always wrong and most often the other paid too dearly for victory and found they were far worse for the experience.” We as a nation are ever called to remember how we came to celebrate this day and honor the memory of those who gave their lives – using that memory to steer our course forward. For many years, the memory of those who gave their lives became secondary to other purposes. People in both the North and South contributed to the loss of a moral compass regarding the remembrance of those who died.

In time, the compass inevitably returns to its true north because each generation has its own memories: World War II, Korea, Vietnam, regional conflicts, Iraq, Afghanistan, and the list continues. Sadly, we all have lived to see too many wars. We all have known too many classmates, friends, parishioners – and their children – who gave their lives in service to our nation. There will always be others who will want to repurpose Memorial Day for their own cause, deflecting the compass from its true north. Let us pray we learn the lessons of history, war and peace, lest we relive them. Let us remember well.

This Memorial Day let us recall the many who served, the people we knew, deceased and living; people who served and did so with a moral compass that never wavered. Their stories keep our memory sure and true. To them and their families – Happy Memorial Day. And to my good friend whose compass held ever true, enjoy your well-earned retirement. BZ.

2 thoughts on “Let us remember well”