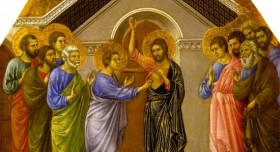 It is a familiar gospel, a well-known story. It is an episode of “Doubting Thomas.” The one held up for us as an example of what not to be – the one who doubted Jesus. “Don’t be a Doubting Thomas!” we are warned because that leaves you one step away from being Judas.

What other gospel stories do you know about Thomas? Sadly, most people only know this one episode. This is the same Thomas who otherwise is depicted in the Gospel according to John as authentic, straight-forward, sincere, and even courageous. In the 11th chapter of John, Thomas is the one who urged all the disciples to go with Jesus to the home of the now-deceased Lazarus even thought it might mean their deaths (Jn. 11:16). And in chapter 14, when Thomas doesn’t understand Jesus’ metaphorical speech about the place he is going to, Thomas does not do the holy nod – you know, “Jesus said it, I don’t get it, I am not even curious, so I will just nod.” Thomas asks the practical: “Master, we do not know where you are going; how can we know the way?” Even when he doesn’t get it or knows the consequences, Thomas is faithful to Jesus and the mission. And then Thomas’ world crumbles: Jesus dies on the cross.

When we think of Easter morning stories, most remember the encounter of Mary Magdalene and Jesus in the garden. Questioning quickly resolving to revelation and mission. But listen again to St. Mark’s description of the discovery of the anarchy of the empty tomb: “Then [the women] went out and fled from the tomb, seized with trembling and bewilderment. They said nothing to anyone, for they were afraid.” (Mark 16:8) Consider the reaction of the two disciples on the road to Emmaus, when they encounter the not-as-yet-recognizable Jesus, they are described as downcast. The story they tell is one of their centers coming apart: “we were hoping that he would be the one” (Luke 24:21) Disappointment is the bitter bankruptcy of a soul that borrowed too much against hope.

The women were not the only ones who were afraid. The disciples were cowering in fear in the Upper Room, Thomas was not there among them. Were they facing their own bankruptcy of faith in the days that having been unfolding in the three days since Jesus’ arrest in Gethsemane? Maybe some were thinking about going home. The two on the road to Emmaus seemed to have made that choice. There is nothing quickly resolving the anarchy that surrounds them.

I wonder why Thomas was not with them in the Upper Room when Jesus first appeared on the evening of that Sunday of long ago. Where was he? What was he doing? I can imagine him thinking to himself, “I thought Jesus was the Messiah…guess not. Let’s be real about this. Jesus was nailed to the cross. He is dead. He left us here. My hopes and dreams are as dead as he is. But I will not hide in that room. I know one thing, life moves on, so I might as well get on with it.”  Then he returns and the Upper Room is abuzz with excitement: He is Risen! Are we surprised that Thomas, not privy to the revelation, still mired in the anarchy of his own thoughts, speaks aloud his inner thoughts and fears?

One week later, everything changes: “Peace be with you.” Then he said to Thomas, “Put your finger here and see my hands, and bring your hand and put it into my side, and do not be unbelieving, but believe.” Jesus uses Thomas’ own words, not to humiliate or scold him, but simply to invite him out of the anarchy into a wider world of new life, and new possibilities. Jesus opens the door.  Thomas chooses to pass through the open gate of mercy, reconciliation and forgiveness. His faith takes him to the shores of the Indian subcontinent as he spreads the Gospel. His faith takes him to eternal life. Thomas now knows what is possible, what God can do, and will come to know what God can do through him.

And why is it again that we are not supposed to be like Thomas? Would that we were all like Thomas.

Our lives will inevitably have moments when “Things fall apart; the centre cannot hold; Mere anarchy is loosed upon the world…”  As overwhelming as these moments seem, they are neither eternal or infinite – but Easter and the Risen Christ is exactly those things: Infinite Hope and Eternal Life.

All the people of the Easter stories came to understand that indeed things fall apart, but know that the Center always holds, ever present in the anarchy. They never lost infinite Hope. May the blessings of Easter always lead you to that infinite Hope.

2 thoughts on “The Center that Holds”