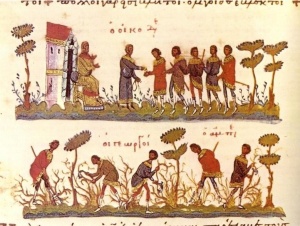 The Traditional Interpretation. This interpretation holds that the parable is a symbolic account of the history of Israel, whose leadership (tenants of v.34) has rejected God’s earlier prophetic messengers (cf. Jer 7:25–27 seen in servants of vv.34-35). In v.37 the parable leaves Israel’s past and intuits the events of the Passion and Crucifixion that lay in the days to come. Indeed, the leaders of Jerusalem will seize Jesus and crucify him outside Jerusalem (cf. v.39). Where the traditional interpretation begins to waver starts in v.43 taking on a different direction from its OT parallel in Is 5:1-7:

Now, I will let you know what I mean to do with my vineyard: take away its hedge, give it to grazing, break through its wall, let it be trampled! Yes, I will make it a ruin: it shall not be pruned or hoed, but overgrown with thorns and briers; I will command the clouds not to send rain upon it. (Is 5)

Where the owner seems to abandon the vineyard in the OT telling, here in the Gospel according to Matthew, we are told of a very different outcome: “Therefore, I say to you, the kingdom of God will be taken away from you and given to a people that will produce its fruit.” (v.43) In a scene reminiscent of the encounter of the prophet Nathan and King David, Jesus confirms what the Jerusalem leaders have already offered: “lease his vineyard to other tenants who will give him the produce at the proper times” (v.41)

What does this imply? The whole parable might then be interpreted as a prediction of imminent régime change in Jerusalem. But if the tenants are the Jerusalem leadership, the new tenants are a “people.” In the Greek, the word used is ethnos, “nation.” When a “nation” replaces the chief priests and elders there may well be something more radical implied, just as the withering of the fig tree symbolized the destruction of the temple, not merely its reorganization, and that same destruction (“deserted,” 23:38; “not one stone on another,” 24:2) is the conclusion to which the present confrontation is heading. More on this later.

A further clue to what sort of new régime may be expected is provided by the quotation from Ps 118:22: “‘The stone that the builders rejected has become the cornerstone; by the Lord has this been done, and it is wonderful in our eyes’?” Psalm 118:22–23, here quoted exactly according to the LXX version, is part of the climax to the Hallel psalm which has already featured in Jesus’ royal ride to the city (v. 9, alluding to vv. 25 and 26). The speaker is probably the king, speaking on behalf of the nation, and the vindication of the rejected stone represents Israel’s triumph over the enemies who despised her. Thus the text does not in itself require a messianic application, but we have seen in 2:15 and 4:1–11 how naturally it comes to Matthew (and presumably to the wider Christian tradition within which this parable was handed on) to present Jesus as the personal embodiment of Israel, the “son of God.”

After the tenants’ rejection of the son in the parable the builders’ rejection of the stone is not hard to interpret. If the same stone that is rejected will become the cornerstone, then the son who is rejected may also be expected to be vindicated and to replace the present leadership. The addition of this quotation thus points us beyond the death of Jesus to his resurrection, that which is “wonderful in our eye.” The new “nation” of v. 43 may be understood as the people who follow the risen Jesus, just as the “something greater than the temple” in 12:6 appears to point beyond Jesus himself to a whole new régime focused in him.

The One Rejected. The climax of the story comes with the unexpected involvement of the landowner’s son following the servants. If the servants are the OT prophets, it is interesting to note that in Hebrews 1:1–2 “a son” as God’s last word follows prophets. Within the framework of the story the sending of the son is clearly a last resort, short of the owner returning himself (as he will eventually do in v. 40). When the son goes as his father’s messenger he goes with all his father’s authority, and so deserves “respect” and obedience. To reject the son’s demand is therefore the climax of rebellion. But to kill him is to add injury to insult. As a bid for independence and an attempt to gain possession for themselves it was hardly likely to succeed in a society under the rule of law, and it reads more as a spontaneous and ill-conceived impulse than as a calculated policy. But a parable does not have to fit into real life, and the points at which it becomes improbable are usually meant to draw attention.

The leaders of Jerusalem, I would suspect, understand the “son” to be a reference to Jesus and draw a conclusion of treasonous rebellion against the leaders of the Temple, as well as Roman rule. However, the Christian reader cannot fail to understand Jesus as the Son of God and the heir of the vineyard of Israel. For the Christian reader, Jesus’ death becomes Israel’s culminating act of rebellion, and may well reflect on how futile it was to try to escape from under God’s rule. To kill the son is an act of defiance to the father that will bring a cry for justice.

Matthew 21:35–36 Mark’s series of three individuals’ being treated progressively worse, followed by “many,” becomes in Matthew two groups of slaves sent by the vineyard’s owner. Given Matthew’s Jewish audience and thus more astute to the OT parallel than Mark’s readers, the two groups probably represent the biblical categories of former and latter prophets.

Matthew 21:40 owner: Our translation hides an interesting shift in language. In v.33 the text refers to the “landowner” (oikodespotēs). In v.40 the text refers to the “owner.” Yet the word used is kyrios which elsewhere in Matthew is translated as “Lord.” The same development occurs in the parable of the Workers in the Vineyard, 20:1, 8). Comes: parousia The “coming” of the owner needs no allegorical interpretation it is simply part of the story. It is not likely to refer to Jesus’ own coming: Jesus is the son, not the owner.