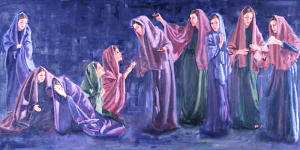 The young women are described with the Greek term for “virgins” which is meant to indicate unmarried friends or relatives of either the bride or the bridegroom. The story tells us that their role included escorting the bridegroom in a torchlight procession to his house, but that they were not present at whatever part of the ceremonies immediately preceded this procession. The unexpected delay at that point in the proceedings may have been caused by extended bargaining over the financial settlement, or by any number of other causes, deliberate or accidental. It does not matter; all that matters is the delay, and the effect it had on the readiness of the girls when the time for their part in the ceremonies eventually arrived.

The prequel to the procession is the wedding feast in the bridegroom’s house, the high point of the celebration. To miss that is to miss everything, and the ending of the story again shades off into the language of eschatological judgment, with the emphatic closure of the door, and the unavailing appeal by the excluded girls. Their address to the bridegroom as “Lord, Lord” and his response, “I do not know you,” read oddly in the narrative situation—of course the bridegroom knew his own wedding party! – but clearly recall the fate of the pseudo-disciples of 7:21–23.

Why then did the five foolish girls miss the feast? It was not that five slept and five stayed awake: v. 5 says explicitly that they all slept and all had to be awakened by the midnight shout. The problem goes back to the preparations they had made before going to sleep. We are offered no allegorical identification for the oil, and can only speculate as we have above. The preceding and following parables both indicate an ethical understanding of what it means to be ready, and this will be further underlined in vv. 31–46, but within this parable that is not spelled out. If there is any hint here as to what was lacking it is in the bridegroom’s verdict “I do not know you,” which, as in 7:21–23, indicates a criterion deeper than merely ethical correctness. But the point is simply that readiness, whatever form it takes, is not something that can be achieved by a last-minute adjustment. It depends on long-term provision, and if that has been made, the wise disciple can sleep secure in the knowledge that everything is ready.

If that is what the parable means, the addition of v. 13 seems quite inappropriate to the story on which it comments: “stay awake” is precisely what none of the ten girls did, and the sensible ones did not suffer because of their dozing. This is why some scholars wonder if this verse is an editorial comment, virtually repeating 24:42, where it preceded a parable which was about staying awake. But the metaphor of keeping awake was more concerned with readiness than with disrupting the normal routine of life, and that sense is indeed appropriate here, even though the metaphor used to express it is literally incompatible with the different imagery of the parable just concluded.