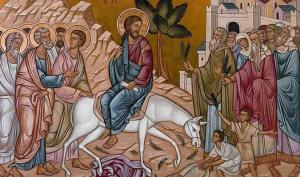 Luke portrays Jesus’ entry into the holy city in four scenes (vv. 28–48), the first two concerned with the acquisition of a colt for the short trip from the Mount of Olives to the city and the entry itself (vv. 28–40). These two serve a common theme—namely, Jesus’ royal personage. As will become evident, the whole process from obtaining a colt to the crowds’ proclaiming Jesus king is wrapped in the eschatological expectation and scriptural allusion (esp. Psalm 118 and Zech 9:9). As mentioned in the introduction (Context), this is a royal person entering a city – not to claim kingship, but as the follow-on to an already achieved victory. This is important because it suggests that Jesus is not about to assert his royal status. This accords well with his acclamation as king even before his birth (1:32–35), and with an interpretation of the preceding chapters of the Lukan narrative as developing the nature of Jesus’ kingship and, therefore, of his kingdom. What Luke is about to narrate, then, assumes the portrait of Jesus already established, with its salvific emphasis on good news to those living on the margins of society (4:18–19).

28 After he had said this, he proceeded on his journey up to Jerusalem. 29 As he drew near to Bethphage and Bethany at the place called the Mount of Olives, he sent two of his disciples. 30 He said, “Go into the village opposite you, and as you enter it you will find a colt tethered on which no one has ever sat. Untie it and bring it here. 31 And if anyone should ask you, ‘Why are you untying it?’ you will answer, ‘The Master has need of it.’” 32 So those who had been sent went off and found everything just as he had told them. 33 And as they were untying the colt, its owners said to them, “Why are you untying this colt?” 34 They answered, “The Master has need of it.”

Jesus’ approach to the city is emphasized by the repeated use of the verb for “to draw near” (engizō) in this part of the narrative (19:11, 29, 37, 41). The carefully orchestrated securing of the donkey is probably meant to convey Jesus’ foreknowledge of these events. Rationalizing explanations suggesting that Jesus had previously arranged for the use of the donkey might explain Jesus’ ability to tell the disciples where the donkey would be tied, but hardly do justice to the instruction he gives the disciples regarding what they are to say when they are challenged by its owners. Again, the detail and the repetition of the declaration “The Master has need of it” suggest that these words convey a christological affirmation. The events are unfolding according to God’s foreordained redemptive purposes—as will all that follows.

35 So they brought it to Jesus, threw their cloaks over the colt, and helped Jesus to mount. 36 As he rode along, the people were spreading their cloaks on the road; 37 and now as he was approaching the slope of the Mount of Olives, the whole multitude of his disciples began to praise God aloud with joy for all the mighty deeds they had seen. 38 They proclaimed: “Blessed is the king who comes in the name of the Lord. Peace in heaven and glory in the highest.” 39 Some of the Pharisees in the crowd said to him, “Teacher, rebuke your disciples.” 40 He said in reply, “I tell you, if they keep silent, the stones will cry out!”

In Matthew 21:4, the sacred author makes specific reference to OT scripture: “This happened so that what had been spoken through the prophet might be fulfilled.” Matthew is pointing to Zechariah 9:9–10

9 Rejoice heartily, O daughter Zion, shout for joy, O daughter Jerusalem! See, your king shall come to you; a just savior is he, Meek, and riding on an ass, on a colt, the foal of an ass. 10 He shall banish the chariot from Ephraim, and the horse from Jerusalem; The warrior’s bow shall be banished, and he shall proclaim peace to the nations. His dominion shall be from sea to sea, and from the River to the ends of the earth.

Most scholars agree that this is also the imagery that Luke is echoing even as Luke’s account of Jesus’ entry into Jerusalem conforms to the motif of the royal processions of the ancient near east as kings and conquerors entered the capital cities. Consider the basic elements of the Lukan account: