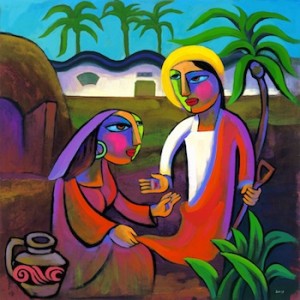 8 Then [Mary Magdalene and the other Mary] went away quickly from the tomb, fearful yet overjoyed, and ran to announce this to his disciples. 9 And behold, Jesus met them on their way and greeted them. They approached, embraced his feet, and did him homage. 10 Then Jesus said to them, “Do not be afraid. Go tell my brothers to go to Galilee, and there they will see me.”

11 While they were going, some of the guard went into the city and told the chief priests all that had happened. 12 They assembled with the elders and took counsel; then they gave a large sum of money to the soldiers, 13 telling them, “You are to say, ‘His disciples came by night and stole him while we were asleep.’ 14 And if this gets to the ears of the governor, we will satisfy (him) and keep you out of trouble.” 15 The soldiers took the money and did as they were instructed. And this story has circulated among the Jews to the present (day). 16 The eleven disciples went to Galilee, to the mountain to which Jesus had ordered them. (Matthew 28:8-15)

The narrative context is familiar to all readers: Jesus has been crucified, died, and laid within a tomb guarded by soldiers (27:65) and watched by Mary Magdalene and “the other Mary” (27:61).  The Sabbath has passed and dawn approaches on the first day of a new week.

The canonical accounts of the empty tomb are fairly similar. Women (names and number of women differ) come to the tomb early on Sunday morning. The stone is rolled away and the tomb is empty. The synoptics also have a messenger (or two) speak to the women.

Speaking to the diversity of resurrection accounts, Keener (697) notes that “a calculated deception should have produced greater unanimity. Instead, there seem to have been competitors: ‘I saw him first!’ ‘No! I did.’“ But the divergent details suggest independent traditions, thereby underling the likelihood of details the accounts share in common.”

Canonically Matthew bases his account upon Mark 16:1-8 and a comparison of those verses with Mt 28:1-8 reveals the dependence – and get there are differences. The two points that are common to the resurrection testimony of all the gospels are that the tomb of Jesus had been found empty and that the risen Jesus had appeared to certain persons, or, in the original form of Mark, that such an appearance was promised as soon to take place (see Mark 16:7). At one level it might appear as though Matthew is constructing a Christian apologetic for the faith. But the emphasis throughout (except in the story of the guard) is not on factual proof of the Resurrection for the non-Christian world, but on the impact of the incredible truth on Jesus’ bewildered and exhilarated followers, on their fear and joy, doubt and assurance. It is with the restoration of their broken relationship with him, with all that this implies for their continuing mission, that Matthew will conclude his book.

On this central and all-important basis, Matthew has constructed an account that interprets the resurrection as the turning of the ages (Matthew 28:2–4), shows the Jewish opposition to Jesus as continuing to the present in the claim that the resurrection is a deception perpetrated by the disciples who stole his body from the tomb (Matthew 28:11–15), and marks a new stage in the mission of the disciples once limited to Israel (Matthew 10:5–6); now they are to make disciples of all nations. In this work they will be strengthened by the presence of the exalted Son of Man, who will be with them until the kingdom comes in fullness at the end of the age (Matthew 28:16–20).