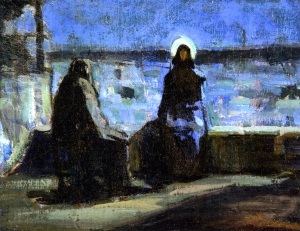 Jesus answered and said to [Nicodemus], “Amen, amen, I say to you, no one can see the kingdom of God without being born from above.” (John 2:3)

Certainly in the lexicon of American religious language, “being born again” has loomed large in many circles. Growing up in the South I was often asked “Have you been born again.” Today’s gospel is the text that provides the basis for the question. There within the Greek is the expression gennēthē anōthen. It can validly be translated as “born again” or “born from above.”  Some bibles opt for the “again” (TLW), some opt for “again” with a footnote to explain there is an alternative (RSV, NIV, TEV, NASB, ESV, KJV).  Other opt for “from above” without explanation (NAB, NJB) or with explanation as to the alternative (NSRV, CEV). Does it make a difference?This double meaning is possible only in Greek; there is no Hebrew or Aramaic word with a similar double meaning. Jesus’ words to Nicodemus in v.3 are unavoidably and intentionally ambiguous because of the inherent double meaning of anōthen. And this is a common feature of St. John’s writings. The ambiguity of meaning is lost in English translations because the translators privilege one meaning of anōthen in the text and relegate the second meaning to a footnote at best. This translation strategy communicates to the reader that the footnoted translation is a secondary definition, not an inherent meaning of the word. The translators thus decide for the reader that one reading is primary and the other secondary, when the Fourth Evangelist intends both to be heard simultaneously. Jesus’ expression “to be born anōthen, to be born from above/again” challenges Nicodemus to move beyond surface meanings to a deeper meaning. When English translations resolve the tension in Jesus’ words by reducing anōthen to one of its meanings, the challenge to Nicodemus (and to the reader) is lost. The intentional double meaning of anōthen must be kept in mind when reading this verse in order to discern Jesus’ full meaning and the nature of Nicodemus’s misunderstanding.

So – which is the better translation? This is a way of asking what is the answer Jesus intends as he asks the ambiguous question?  Let’s take a look. As to the word anōthen , the prefix ana (adverbial form: ano) generally means “up”. As in anabaino = “to go up” in contrast to katabaino – “to go down”. The adverb ano is used three times in John all in reference to something “up”.

In English we have the phrase “from the top” which can mean “start from the beginning” or “do over”. So anōthen can mean, “again” or “anew,” but that isn’t its primary meaning.

I think that as other terms are misunderstood in John, Jesus meant “from above” (= from God) and Nicodemus took it as “again” (= a second time). It is striking that the popularization of this expression, “born again” has accepted Nicodemus’ misunderstanding (born again) rather than Jesus’ word.