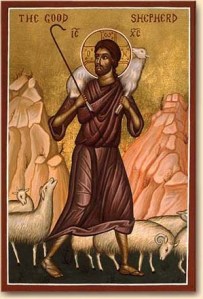 Mary the mother of Jesus heard her name and said, “Yes.”

Peter, James, John and Andrew heard their names called and followed, leaving boats and nets behind.

When Jesus called Lazarus from the grave, he called him by name.

In the garden on Easter Sunday morning, stunned by an empty grave, Mary Magdalene grief is turned into elation in one word, hearing Jesus call her by name.

On the road to Damascus, St. Paul heard the Lord call him by name.  He heard the voice of the Good Shepherd and followed – to the ends of the earth.

Francis of Assisi heard his name called to rebuild the church.

Just one word – one single word calling them – calling you, calling me to a new life. All in just one word. Such is the power of the Word, the Word made flesh

Your name, spoken at baptism; names spoken by parents, but then by that one name, claimed for Christ, anointed and embraced in the family of God.

And the Living Word still calls into the world.  All people being called to holiness. In the depths of every authentic Christian there is an echo of the experience of Peter on the shore of the Sea of Tiberius. Peter, a sinner, the one who three times denied Jesus. And then Jesus speaks to the heart “Do you love me?”  Simon Peter answered him, “Yes, Lord, you know that I love you.” From that answer of love is the root of our vocation – as mothers, fathers, butcher, bakers, and candlestick makers –Christian character formed by the love of God.

Every day we are people called to listen into and within the cacophony of sound from the modern world to hear our call to holiness, to worship, to service. But on this Sunday, Good Shepherd Sunday, we are also called to help others hear their voices called to priestly ministry.

On this Sunday, we are a people asked to pray for vocations. And we are people perhaps called to say the one word – “John”, “Patrick” “Alan” “Joe” – to speak the name of those among us whom we intuit, we sense, we perceive, we discern may have special call to follow Christ in ordained ministry.  Maybe they are our brother, our cousin, our friend.  God knows who they are – many times we sense who they are before they do.  They are already following the Good Shepherd, but there is a road less traveled that awaits them. And on this Sunday, we are called to speak their name and to ask them about that road.  “Have you ever thought about….?”

This is a part of our communal mission – to call others to the priestly life.  It only takes one word.  And as Teresa of Avila said, Christ has no voice on earth but yours.  Your voice hinting, asking, suggesting that another should be one to serve the community, to lead worship, to pray for the world, to be a shepherd for a time.  Your voice letting them see more clearly what God has in store for them. Your voice speaking the one word.

All of us form a single community of faith. All journeying under the care of the Good Shepherd and those called to journey with us.  All listening into a cacophony of sounds, to hear and answer to the voice of the Good Shepherd.  “My sheep hear my voice; I know them, and they follow me. I give them eternal life, and they shall never perish.”

Abraham and Sarah before us, Paul and Barnabas, Francis and Clare have all gone home to the Lord. And soon enough we all come to the end of days.  We don’t know for certain what we will experience. What’ll transpire when the Lord calls us home: “a great multitude, which no one could count, from every nation, race, people, and tongue. They stood before the throne and before the Lamb, wearing white robes and holding palm branches in their hands.”

And in that great by-and-by, we’ll hear our name in a way never before pronounced. Our name. Uttered with love and mercy beyond all imagining. A warm welcome to a life without end.

Such is the power of the Word