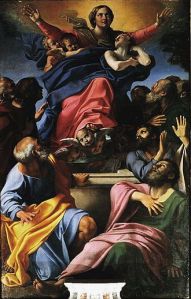 The Assumption was defined as dogma only in the 1950.  In our Catholic Church ‘dogma” is defined as a truth revealed by God, which the magisterium of the Church declared as binding upon all Catholics. The term Dogma Catholicum was first used by Vincent of Lérins (450), referring to “what all, everywhere and always believed” – with the emphasis on katholica meaning universal. The term dogma derived from the Greek dogma (δόγμα) meaning literally “that which one thinks is true” and the verb dokein, “to seem good.”

On 1 November 1950, in the Apostolic Constitution Munificentissimus Deus Pope Pius XII declared the Assumption of Mary as a dogma:

By the authority of our Lord Jesus Christ, of the Blessed Apostles Peter and Paul, and by our own authority, we pronounce, declare, and define it to be a divinely revealed dogma: that the Immaculate Mother of God, the ever Virgin Mary, having completed the course of her earthly life, was assumed body and soul into heavenly glory

Pope Pius XII deliberately left open the question of whether Mary died before her Assumption.

On the same day, the Eastern Orthodox and Eastern Catholics celebrate the Dormition of the Mother of God (or Dormition of the Theotokos, the falling asleep of the Mother of God). Eastern Christians believe that Mary died a natural death, that her soul was received by Christ upon death, and that her body was resurrected on the third day after her death and that she was taken up into heaven bodily in anticipation of the general resurrection. Her tomb was found empty on the third day.

Orthodox tradition is clear in regard to the central point of the Dormition: the Holy Virgin underwent, as did her Son, a physical death, but her body – like His – was afterwards raised from the dead and she was taken up into heaven, in her body as well as in her soul. She has passed beyond death and judgement and lives wholly in life eternal.

In parallel to the theological discussion – actually, well before the theologians got into the mix, the Assumption had a rich history of writings and liturgical celebrations. The earliest known Reference is “The Book of Mary’s Repose” which survives in an Ethiopic translation. It is understood as being a 3rd century writing. Also, quite early is a book titled, “The Six Books” a collection of Dormition narratives dating to the 4th century.

In some versions of the narrative, the Assumption is said to have taken place in Ephesus, in the House of the Virgin Mary. Comparatively, that is a later and localized tradition – especially in Ephesus. The earliest written traditions say that Mary’s life ended in Jerusalem located in the Kidron Valley – at the foot of Mount of Olives. What is interesting is that since the 5th century all rulers over Jerusalem have honored the tomb of Mary as being in that location.  The Muslim rulers may have destroyed the church atop the tomb but the crypt was left untouched, as for Muslims it is the burial place of the mother of prophet Isa (Jesus)

By the 7th century, a variation of the narrative emerged, according to which one of the apostles, often identified as St Thomas, was not present at the death of Mary but his late arrival precipitates a reopening of Mary’s tomb, which is found to be empty except for her grave clothes.

The liturgical celebrations (transitus celebrations) of the Assumption were well established in the East by the 5th century and began widespread celebration in the West by the 9th century.