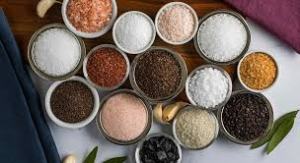 My friends, associates, strangers on the street, heck, just about anyone has probably heard me babble on about a book written by Mark Kurlansky: Salt: A World History.  Yup, you heard it correctly. A whole history of the world written in the context of salt.  As the author writes, “from the beginning of civilization until about one hundred years ago, salt was one of the most sought-after commodities in human history.”  And you took salt for granted.

The ancients believed that salt would ward off evil spirits.  Religious covenants were often sealed with salt.  Salt was used for medicinal purposes, to disinfect wounds, check bleeding, stimulate thirst, and treat skin diseases.  Roman soldiers were sometimes paid in salt, the Latin of which is sal — hence our English word, “salary.”  Brides and grooms rubbed salt on their bodies to enhance fertility.  The Romans salted their vegetables, giving us the modern-day word “salad.”  Around ten thousand years ago, dogs were first domesticated using salt; people would leave salt outside their homes to entice the animals.  And of course, in all the centuries before refrigeration, salt was essential for food preservation.

How valuable was it? The great merchant city empire of Venice became great because it controlled the Mediterranean salt trade.

Today we don’t have the same sense of salt’s value. We still use salt for all sorts of purposes: to accentuates flavors, melts ice, softens water, and lower the boiling point of water.  It soothes sore throats, rinses sinuses, eases swelling, and cleanses wounds.  If we don’t have enough salt in our bodies, we die.  But if we have too much?  We have high blood pressure…and can also die.

Cooking with salt is an art form in and of itself. Think of all the options: table or kosher salt, sea salt, Himalayan pink, celtic, fleur de sel, kala namak, flake salt, black and red Hawaiian, Persian blue, and who knows how many other kinds of salt. Too little salt, and some foods remains bland and lifeless, all of its potential zest subdued.  Too much salt, and the food is lost to a sharp, intolerable bitterness. When we were kids my mom, a good cook in her day, made a chicken soup. A comedy of errors over-salted the concoction. The chicken died a second death and we kids were sure mom was trying to poison us. We poured the soup out the breakfast nook window. Mom caught us and yelled. The plants outside died. As I said, cooking with salt is an art form.

It does not matter – then or now – if you are poor, sad, burdened, or persecuted.  Hungry, sick, or frightened.  Outcast, misfit, or disreputable. Demon possessed then or suffering from the modern demon possession of drugs, alcohol and pornography. Fashionable or not. Loved or not. High society or on the streets rejected, wounded, unloved, and forgotten. We are the salt of the earth. We are priceless. We are precious in His eyes.

How will we use this precious commodity? Salt works best when it is used when it dissolves into what is around it, giving of itself, sharing its unique flavor in order to bring out the best in all that surrounds it. Which means that if we want to enhance and preserve the world we live in, we must not remain within the walls of our churches. Salt doesn’t exist to preserve itself; it exists to preserve what is not itself.

In its use we must remember that salt is meant to enhance, not dominate.  One of the great tragedies and sins of Christianity over the centuries has been the failure to understand this distinction.  Salt fails when it dominates.  Instead of drawing out the goodness, it overpowers and destroys leaving a bitter sensation in its wake.  It ruins what it tries to enhance and repels what remains.

Salt of the earth. It is who we are, and we are precious in His eyes and something needed, no required!  in the world. We are not meant to be a secret society hoarding our blessings and sacraments unto ourselves. We are to take our saltiness out into our modern lives so that it enhances and heals, purifies and blessed all we do. Making the good in others even better.

Table or Persian blue – all have their place and uniqueness. But there is no substitute for the salt of our faith. It is precious and plentiful – and meant to be used well – in the right amounts, at the right moment.

We are a Catholic community striving to offer holiness, healing, hospitality and help to a waiting world – the salt of our faith. Too much salt and it just gets poured out the window and kills all it touches. Too little and it is never noticed. The best cooks learn to taste for salt and bring the most basic and necessary of all the elements of this life to enhance their gift of food.

The best Christians learn to taste for salt and bring the most basic and necessary of all the elements of eternal life to enhance and bless the world around us.