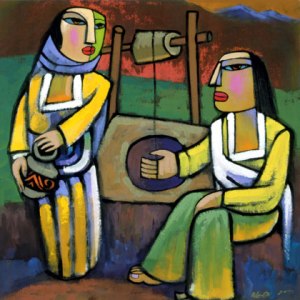 Next Sunday is the 3rd Sunday in Lent, Year A. You can read a complete commentary on the Sunday Gospel here.

5 So he came to a town of Samaria called Sychar, near the plot of land that Jacob had given to his son Joseph. 6 Jacob’s well was there. Jesus, tired from his journey, sat down there at the well. It was about noon. 7 A woman of Samaria came to draw water. Jesus said to her, “Give me a drink.” 8 His disciples had gone into the town to buy food. 9 The Samaritan woman said to him, “How can you, a Jew, ask me, a Samaritan woman, for a drink?” (For Jews use nothing in common with Samaritans.) 10 Jesus answered and said to her, “If you knew the gift of God and who is saying to you, ‘Give me a drink,’ you would have asked him and he would have given you living water.” 11 (The woman) said to him, “Sir, you do not even have a bucket and the cistern is deep; where then can you get this living water? 12 Are you greater than our father Jacob, who gave us this cistern and drank from it himself with his children and his flocks?” 13 Jesus answered and said to her, “Everyone who drinks this water will be thirsty again; 14 but whoever drinks the water I shall give will never thirst; the water I shall give will become in him a spring of water welling up to eternal life.” 15 The woman said to him, “Sir, give me this water, so that I may not be thirsty or have to keep coming here to draw water.”

16 Jesus said to her, “Go call your husband and come back.” 17 The woman answered and said to him, “I do not have a husband.” Jesus answered her, “You are right in saying, ‘I do not have a husband.’ 18 For you have had five husbands, and the one you have now is not your husband. What you have said is true.” 19 The woman said to him, “Sir, I can see that you are a prophet. 20 Our ancestors worshiped on this mountain; but you people say that the place to worship is in Jerusalem.” 21 Jesus said to her, “Believe me, woman, the hour is coming when you will worship the Father neither on this mountain nor in Jerusalem. 22 You people worship what you do not understand; we worship what we understand, because salvation is from the Jews. 23 But the hour is coming, and is now here, when true worshipers will worship the Father in Spirit and truth; and indeed the Father seeks such people to worship him. 24 God is Spirit, and those who worship him must worship in Spirit and truth.” 25 The woman said to him, “I know that the Messiah is coming, the one called the Anointed; when he comes, he will tell us everything.” 26 Jesus said to her, “I am he, the one who is speaking with you.” 27 At that moment his disciples returned, and were amazed that he was talking with a woman, but still no one said, “What are you looking for?” or “Why are you talking with her?” 28 The woman left her water jar and went into the town and said to the people, 29 “Come see a man who told me everything I have done. Could he possibly be the Messiah?” 30 They went out of the town and came to him. 31 Meanwhile, the disciples urged him, “Rabbi, eat.” 32 But he said to them, “I have food to eat of which you do not know.” 33 So the disciples said to one another, “Could someone have brought him something to eat?” 34 Jesus said to them, “My food is to do the will of the one who sent me and to finish his work. 35 Do you not say, ‘In four months the harvest will be here’? I tell you, look up and see the fields ripe for the harvest. 36 The reaper is already receiving his payment and gathering crops for eternal life, so that the sower and reaper can rejoice together. 37 For here the saying is verified that ‘One sows and another reaps.’ 38 I sent you to reap what you have not worked for; others have done the work, and you are sharing the fruits of their work.” 39 Many of the Samaritans of that town began to believe in him because of the word of the woman who testified, “He told me everything I have done.” 40 When the Samaritans came to him, they invited him to stay with them; and he stayed there two days. 41 Many more began to believe in him because of his word, 42 and they said to the woman, “We no longer believe because of your word; for we have heard for ourselves, and we know that this is truly the savior of the world.” (John 4:5-42)

The familiar story of the Samaritan woman at the well should always be read with an eye toward the pericope that precedes it: the encounter with Nicodemus. Nicodemus was a Pharisee (3:1) and a “teacher of Israel” (3:10) a moniker from which we can infer a number of things: he was Jew by birth, married, and the head of rabbinic school. He was someone who was well familiar with Scripture and the traditions of Judaism – and perhaps it is this understanding and perspective out of which rises curiosity about the wandering preacher from Galilee. And so he seeks out Jesus, albeit under the cover of darkness (3:2). In John’s gospel, this is the shade of day from which emerges a weak, wavering or incomplete faith. Nicodemus has been attracted by Jesus’ signs, an attraction not to be despised, yet at a distance from true faith. A dialogue ensues, animated once more by ambiguity and misunderstanding. Jesus tells Nicodemus: ““Amen, amen, I say to you, no one can see the kingdom of God without being born ańothen.” (3:3). The Greek ańothen has dual meanings: “again/anew” or “from above.” The expression “born again” has a context and meaning in Judaism of Nicodemus’ day. One is born again when one converts to Judaism, comes of age, is married, crowned a king, ordained a rabbi or becomes the head of a rabbinic school. Nicodemus as done all these thing (that pertain to him) and hence the question: “How can a person once grown old be born again? Surely he cannot reenter his mother’s womb and be born again, can he?” (3:4). Nicodemus cannot understand who it is before him and what he offers – and from among the two choices, earthly (again) or heavenly (from above), Nicodemus seems to only understand the earthly choice; he does not understand that “without being born of water and Spirit” he will not have eternal life in the kingdom.

Nicodemus is being asked to let go of all he knows/believes to be true in order to be “reborn” or the more common “born again.” The expression is a slogan, a rallying cry, and a test – “Have you been born again.” It is a short-hand to reduce the contemporary Christian experience to a sound bite. While the phrase has its merits, it is also taken out of the context of a much more nuanced dialogue. It flattens the word ańothen to only be connected to an individual’s private moment of conversion. As Gail O’Day notes, it privileges anthropology over Christology. It is the mistake that Nicodemus makes in not grasping the decisive Christological meaning of ańothen – focusing on personal change rather than the source of the change: the cross. And in doing lose the emphasis of the newness of life possible for which there are no precedents. To approach the text of the Nicodemus story already assured that one knows the meaning, is to repeat the approach of Nicodemus.

To approach the text of the Samaritan women already assured that one knows the meaning is to miss an encounter with Jesus that leads her to the newness of life. But then she is a Samaritan. She is a woman. What could she possibly understand that would elude Nicodemus, the teacher of Israel?