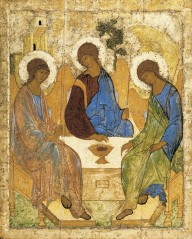 Holy Trinity Sunday. On Trinity Sunday, we are called to reflect with joy and thanksgiving what the Father, Son and Holy Spirit have done to bring about redemption and the possibility of salvation for all. We celebrate to respond to the love God has shown for us, praising Him, and giving Him glory. We that we were created in the image of God, saved by God despite our sins, and our journey in this life is accompanied by God at each moment. It is a celebration and invitation to share the inner life of the Trinity.

Franciscan life was shaped by reflection on the inner life of the Trinity. It is in the writings of St. Bonaventure that the core of our fraternal life was expressed using the older ideas of the 4th century Cappadocian Fathers of the Eastern Church. Their central idea was that the inner life of the Trinity is one of relationship, relationship in love. They wrote that this fountain fullness of love is a perichorisis, a divine dancing in and out of each other that whirls and swirls until it explodes into Creation – giving life.  An internal love of Father, the Son, and the Holy Spirit, moving outward, creating the world in love, structuring all life to find its ultimate destiny in love. Trinitarian life is relational.

We find that Trinitarian foundation in the very opening words of our Mass: “The grace of the Lord Jesus Christ and the love of God and the fellowship of the Holy Spirit be with all of you.” (2 Cor 13:13) It comes from our second reading today. That reading also has foundational words: “Finally, brothers and sisters, rejoice. Mend your ways, encourage one another, agree with one another, live in peace, and the God of love and peace will be with you. Greet one another with a holy kiss.” (2 Cor 13:11-12)

These past two weeks have been times when we would love to “live in peace” as the protests, riots and demonstrations boil around us. There is a public cry at many levels – a cry to “mend our ways.” Too many black men and women have died at the hands of police in situations that escalated from intervention to violence to death. We know the names: George Floyd, Ahmaud Arbery, Breonna Taylor, Eric Garner, Philando Castile, Trayvon Martin – and there are others. The police are in a tough, sometimes impossible situation, but more can be done to mend and advance law enforcement so that the list does not grow.

But the second reading is not simply for the few policemen who will be held responsible. Or even law enforcement in general. The reading speaks to us. “Finally, brothers and sisters, rejoice. Mend your ways, encourage one another, agree with one another, live in peace, and the God of love and peace will be with you. Greet one another with a holy kiss.” Live in Peace: we are not there yet. What do we need to work on to get there? What part of our lives needed attention so that we can mend our ways?

Do you know the name Christian Cooper? He is a young black man — a birdwatcher — who was reported to the police May 25th by a young white woman, who called 911 to say that “an African American man” was threatening her in New York’s Central Park merely because he asked her to comply with the park’s posted regulations to leash her dog. What made her decide to call the police on a black man for nothing more than politely asking her to obey the park’s rules? And to make up a lie that might possibly put him in harm’s way?

Fr. Bryan Massingale allowed as he could not know the mind of the woman, but his experience as a black man in this country gave him a lifetime of experiences from which to speculate. He wrote that the woman assumed – even if unconsciously –

She assumed that Christian Cooper would understand all of the above and know that any confrontation with the police would not go well for him. And she was right. He clearly knew what was at stake, which is why he had the presence of mind to video record what happened.

It would never occur to me to video record something. Maybe it is because I am old and do not deftly handle a cell phone. Maybe I am not conscious about the presumptions I enjoy as a man, a white man, as a Franciscan, as a priest – and so the need does not arise. But pause for a moment. How many of these events have people of color instantly reached for the mobile phone and started to record. That silent action of witness speaks volumes to me.  How did I help create the video reflex?

It was nothing I did. Yet, The words of the Confiteor come to mind – “that I have sinned in thought, word, and deed; for what I have done and for what I have failed to do.” Our first reaction is that we are not racists, hold no prejudice, do not enjoy white privilege. Yet beyond a selfie, if you are not a person of color, it is doubtful that you have a “video reflex.” Where to begin? Fr. Massingale offers some advice:

Our reading asks the same thing of us and today calls us to challenge and discover ourselves and then mend our way so that “Finally, brothers and sisters, rejoice. …encourage one another, agree with one another, live in peace, and the God of love and peace will be with you. Greet one another with a holy kiss.

Then we can begin to glimpse the inner life of the Most Holy Trinity.