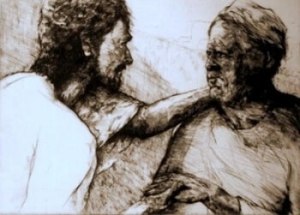 Next Sunday is the celebration of the 24th Sunday in Ordinary Time. You can read a complete commentary on the Gospel here.

21 Then Peter approaching asked him, “Lord, if my brother sins against me, how often must I forgive him? As many as seven times?”22 Jesus answered, “I say to you, not seven times but seventy-seven times.23 That is why the kingdom of heaven may be likened to a king who decided to settle accounts with his servants.24 When he began the accounting, a debtor was brought before him who owed him a huge amount.25 Since he had no way of paying it back, his master ordered him to be sold, along with his wife, his children, and all his property, in payment of the debt.26 At that, the servant fell down, did him homage, and said, ‘Be patient with me, and I will pay you back in full.’27 Moved with compassion the master of that servant let him go and forgave him the loan.28 When that servant had left, he found one of his fellow servants who owed him a much smaller amount. He seized him and started to choke him, demanding, ‘Pay back what you owe.’29 Falling to his knees, his fellow servant begged him, ‘Be patient with me, and I will pay you back.’30 But he refused. Instead, he had him put in prison until he paid back the debt.31 Now when his fellow servants saw what had happened, they were deeply disturbed, and went to their master and reported the whole affair.32 His master summoned him and said to him, ‘You wicked servant! I forgave you your entire debt because you begged me to.33 Should you not have had pity on your fellow servant, as I had pity on you?’34 Then in anger his master handed him over to the torturers until he should pay back the whole debt. 35 So will my heavenly Father do to you, unless each of you forgives his brother from his heart.” (Matthew 18:21–35)

How Much to Forgive? The verses leading up to our passage (vv.15-20) outline the manner in which the individual and the faith community are to deal with the incorrigible members caught in the life of sin. Our gospel follows upon the “last resort” in dealing with his individual, which the earlier approaches have been designed to avoid.  To “tell the church” in the first centuries was often a public statement when the community is gathered, something inevitable if the problem is not solved in conversation. The object of the gathering is not to pronounce judgment but to strengthen the pastoral appeal, in the hope that the offender may yet “listen” (akouo). The offender, faced by the disapproval of the whole local disciple community, ought surely to recognize that this was not just a personal grievance on the part of the initiator. Anyone who is not willing to accept such united testimony may then properly be regarded as no longer a fit member of the community. “You” (singular, referring to the individual who raised the issue, not, at least explicitly, to the community as a whole) should then treat them as “a Gentile and a tax-collector.”  While the term excommunication raises all manner of concern, for indeed by their refusing the offered guidance from the church, they have place themselves “outside the fellowship,” but they are also people for whom the church had a special concern to bring them gospel so that they might repent and become part of the fellowship again.

21 Then Peter approaching asked him, “Lord, if my brother sins against me, how often must I forgive him? As many as seven times?”22 Jesus answered, “I say to you, not seven times but seventy-seven times.

Now the discourse turns to the more ordinary experience of forgiveness and reconciliation within the community. One should note that the passage begins with the same sense as 18:15 – a brother or sister has sinned against another member of the community. In this case, however, the person listened to the individual, group or the church and (presumably is seeking reconciliation) – but what is this is a recidivist person, continually seeking reconciliation for the same transgression. How many times should such a person be forgiven? Once again Peter serves as the spokesman for the group and gives what he imagines to be conventional or perhaps a very generous answer to his own question: seven times (v.21).

If Peter’s reply in convention, Jesus’ opening response, “I say to you…” echoes the language of the Sermon on the Mount in which Jesus says, “you have heard it said, but I say to you” indicating there is a new wisdom, a new convention, a new teaching – leaving the righteousness of the Pharisees and scribes behind. Jesus corrects Peter and answers: seventy-seven times. The increase from seven to seventy-seven echos the boast of Lamech in Gen 4:24: “If Cain is avenged sevenfold [cf. Gen 4:13], then Lamech seventy-sevenfold.” The reference to Cain gives added point to the concept of forgiving a “brother.” Jesus referent is that the disciple must be as extravagant in forgiving as Lamech was in taking vengeance. The point is that Christians are not to place a limit on forgiveness.

“Some commentators notice a tension between vv. 21–22 with their demand for unlimited forgiveness and vv. 15–17 where the end-result may be a breaking off of relationships. But that tension is caused by including the phrase “against you” in v. 15 (see p. 689, n. 3) and so failing to see that the subject has now changed. There is no incompatibility between a robust pastoral concern over another disciple’s sin and willingness to forgive offences against oneself. Verses 15–17 are about how to prevent the loss of a member of the disciple community; vv. 21–22 are about the danger of allowing personal animosity to poison that community. In vv. 15–17 the concern is with the spiritual wellbeing of the offending member; in vv. 21–22 it is with the willingness of the individual not to insist on his or her own right to redress. In each case the “sin” is assumed to be real and culpable, but in the first case what is considered is the effect on the sinner, in the second case the response of the one sinned against.” [France, 699-700]

Some translations render the underlying Greek as “seventy times seven” (i.e. 490 times, e.g. KJV). That rendering is a literal reproduction of the underlying Greek. Its translation here is determined by the clear allusion to Gen 4:24, where the same phrase in the LXX translates the Hebrew “seventy-seven.” But in any case, this is the language of hyperbole, not of calculation. Those who are concerned as to whether the figure should be 77 or 490 have missed the point. The benchmark is provided by the unimaginable scale of God’s forgiveness of his people illustrated in the parable to follow (vv. 24–27). In other words, there is no limit, and no place for keeping a tally of “forgivenesses” already used up. Peter’s question was misconceived: if one is still counting, however “generously,” one is not forgiving.