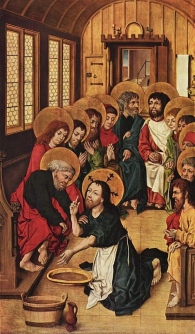 On Holy Thursday it is tradition and part of the evening’s liturgy to celebrate the washing of feet – known as the Mandatum. The name comes from John 13:34 (Latin,Vulgate) – “Mandatum novum do vobis ut diligatis invicem sicut dilexi vos.” “I give you a new commandment, that you love one another as I have loved you.”

Throughout the Christian era the meaning of the foot washing has been understood as a symbol of the self-sacrificing and humble service expected of disciples. But if one attends to the text, there are two verses that should give one pause. In v.8 Jesus clearly tells Peter “Unless I wash [nipsēs] you, you will have no inheritance with me.” In addition, there is v.10: “Whoever has bathed [leloumenos] has no need except to have his feet washed [nipsasthai], for he is clean all over…”

The participle ho leloumenos is used to describe “bathed.” It is an unusual choice as the word means total immersion. This stands in contrast to “washed” later in the same verse (nipsasthai) which involves a partial washing with water. Many scholars have concluded that the bath reference (ho leloumenos; cf. 1 Cor 6:11; Eph 5:26; Titus 3:5; Hebrews 10:22) is a reference to baptism and is placed here to raise up the connection of baptism to the death of Christ (cf Rom 6:3ff). The baptized has no need for further sacramental washing – except to have his feet washed, for he is clean all over. Why the exception of the feet? The thought is that the feet are in contact with the world and so the exception refers to the on-going post-baptismal need for reconciliation and forgiveness.

Throughout the ages these verses have given interpreters pause to reflect about other possible meanings. Some writers in the East, notably John Chrysostom and Theodore of Mopsuestia (5th century), believed the passage to only point to humble service. From the 4th century onward, beginning with St. Augustine, writers in the west have seen a dual reference to Baptism (bathed) and later Reconciliation (washed). By the Middles Ages writers such as Hugh of St Victor began to reflect upon a Eucharistic implication because of the union of a deep, abiding divine love within the context of an ecclesiological (church) setting. Some modern writers have followed this thought. Origen believed this as a symbolic purification in preparation for the disciples to preach the Word after Jesus’ death. Many Reformed scholars, e.g. Cullman, agree with this. And throughout every age, writers east and west have seen the foot washing as a prophetic action pointing to the death of Jesus in humiliation for the salvation of the world.

May your Triduum celebrations be blessed.

2 thoughts on “The meaning of foot washing”