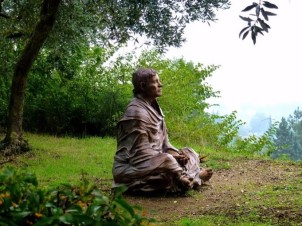 In our previous three articles we described Francis’ part of the 5th Crusade and his meeting with the Sultan of Egypt, Al-Malik al-Kamil.  We know that Francis was away at a time when the community began to grow rapidly – and not just around Assisi, but in many other parts of Italy, Spain, France, and the Germanic nations as well.  While Francis was away, what happened to the friars he left behind?

Francis had delegated his powers to two vicars during his absence:  Matthew of Narni, who remained in Assisi, and Gregory of Naples, who visited the communities throughout Italy.  Another friar, Phillip the Tall, was entrusted with the care of St. Clare and her sisters, the Poor Ladies of San Damiano.  They were given very few orders or instructions.  This might seem odd, given that religious life in the 13th century was quite ordered and obedience was a topic often written about – even by Francis himself.  However, the friars were not technically an ordo, a religious order – they were still a “religious movement” – albeit, a quite famous and rapidly growing one that had the attention of the Pope and the Roman Curia – both in praise and concern.

The Pope and Curia were used to seeing more order and structure in religious life.  They and those who wanted to join Francis expected to find a uniform, rules, organization, a formation program, or even someone to sit them down and explain what was expected, but they were in for a surprise.  None of those things existed, and there was little inclination on Francis’ part to put them in place.  He was not a man with a vision.  He was a man following a vision which unfolded as he followed.

The reality is that religious life and living in community cast Francis in the role of authority and superior – not something he sought nor desired, nor seemed to possess the willingness to do.  “Francis assumed that his followers would learn by imitation.  Giving them rules or structures to follow was not merely difficult for him; it placed him in a position of superiority that he found painful.  He never could formulate his program into rules or present his followers with clear guidance for behavior.  This was especially true in this early period, when many of the attitudes he would later adopt had not yet been clarified and solidified.” (Thompson, 40)  When Francis was present, the best that could be hoped for was the brothers would watch Francis closely and do their best to catch the drift.  And Francis was not even present to the brothers in and around Assisi.  By 1220 most of the brothers had never met Francis.

As we said, when Francis departed he left behind very little in the way of instructions or order, but that is not to say he left behind none.  One thing he was very clear about was to not use the connections to the Pope Honorius III to acquire special privileges.  Matthew, Gregory, and Philip had done just that, gaining exemptions from what little structure they had in their life.  Matthew and Gregory had also implemented statutes that increased the number of days during which the friars were obliged to fast.  Was that a problem?  It was in that lacking Francis’ presence and his understanding of the vision God was unfolding, the others were opting to implement monastic practices, seemingly as way to bring a semblance of order to the friar’s life.

In the year that Francis was away, there were many newcomers.  Among the newcomers were men who were less mature and younger men animated by an enthusiasm which sometimes seemed excessive to their contemporaries.  A prelate like Jacques de Vitry, who, though he really admired the friars, did not hide his concern about the evolution under way when he wrote in 1220, a little before Francis’ return:  “This religious movement appears really dangerous to me because it admits into its group not only mature men but even adolescents and unprepared individuals.  And whereas they should have begun by exercising for a time a regular discipline and by demonstrating their worthiness, here these brothers are sent two by two throughout the whole world.”

This massive and unchecked influx of newcomers was admitted to the fraternity with no formality other than a simple promise of obedience and the taking of the habit.  Individuals introduced into the order who, once past the initial enthusiasm found themselves restless, practiced a kind of unsupervised wandering.  Some simply left the Franciscans after some time to return to the world or to enter into another religious congregation without permission—which was in contradiction with the canonical norms that then regulated consecrated life.  Others were reproached for their laziness, even for moral deviations or uncertain beliefs.  And none of them had Francis to follow and model the vision of this new way of life.

Even some among the most seasoned friars who had participated in those missions in Germany and Hungary came back disappointed and sometimes bitter realizing that their enthusiasm did not replace the visionary leadership from Francis, even as unordered as it was.  From experience, it became obvious that enthusiasm alone was not sufficient and that the Franciscan message could not be propagated without the support of formation, structure, and church authorities.  But was that part of the Franciscan vision?

Francis arrived home in May 1220, nullified the new papal privileges and new statutes, and began to consider the future of the Franciscan movement.  In September, 1220, he formally resigned his role as minister of the brothers.  The story of the Franciscan and of Francis himself was entering a new chapter.

1 thought on “After the Crusades”