The world is a much smaller, more connected place.  Times change, technology changes, and it unfolds in different experiences. In an earlier post, A Persistent Memory, I mentioned that back in 1960 or so the Maryknoll missioners relied on letters and a trip home every 10 years or so. Today the Franciscan Lay Missioners live among the poor and disenfranchised – but that does not mean there is no internet or cell phones. The missioners report and communicate on social media, email, and so are able to connect the people where they live with people back at home in the United States. I served in the between times. Transportation was more easily facilitated, there was the possibility of telephone communications (most days only the possibility), and there were not any internet cafes. One communicated by hand written letters. The “turnaround time” between posting a letter to home and receiving a reply was 5 to 6 weeks. One adjusts to that schedule in ebb and flow of the everyday, but there are times when you want to reply immediately. There are times when you need information, decisions, and advice. Then 5-6 weeks is an eternity.

One day the mail brought a letter from my mom. She had read an article in the Orlando paper about cattle wars, rustling, and death in Lodwar, Kenya. She wanted to know if I was safe. I could tell by the letter that she was quite concerned and asked if I would call her to let her know I was OK. The only option was to write back to let her know Lodwar was on the other side of the country and at least three days’ travel away.

But early on, just after our arrival in Kenya, we were a bit in flux. We had landed in Nairobi, made a day-long trip to Kisumu, changed transport and headed to Rakwaro. Rakwaro is way too small to appear on the map, but it is located just about at the “er” in Kericho. Kisii is the largest town in the area. 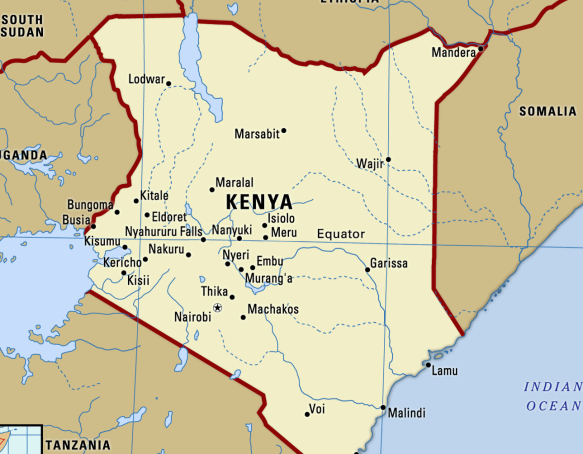 We were asked to stay and help out at an all-boys high school for a month or two until the Franciscan Sisters in Bungoma were ready to receive us at their mission site. Within a week or two, we were informed that the Sisters would not be able to receive us and that we should find another mission placement. OK…. and now…??

As it happens, I am writing this post on the weekend of the 14th Sunday of Ordinary Time, Year B. The second reading is from St. Paul’s 2nd Letter to the Corinthians, chapter 12: “Three times I begged the Lord about this, that it might leave me, but he said to me, ‘My grace is sufficient for you…” Back then when we received the news, I journaled about this Pauline verse and wondered if I believed this was a graced situation, if grace would be sufficient. The head of the high school was already asking if we were going to pay for room and board (which was a reasonable request as budgets were unbelievably tight). I wasn’t interested in teaching, did not have the language skills nor would they be coming anytime soon, and a reply to any letter was 5-6 weeks away. After a bit of journalistic ranting about the situation (communications, language training, and more) I knew it was time to take a deep breath and just own that for a while life would be “betwixt-and-between.” Between all that I knew and had experienced in my life to date and all that I would come to know. Here is what I penned in my journal.

It is in the between times
When night is withering yet the sunrise still prowls beyond the horizon
When the Angelus bells call
When the sun has set and twilight illuminates the pathway
As the lanterns and home lights cast their first shadows against the coming night
These are between times
Between the taps of the old man’s cane sitting is studied silence
Between the counts of the children immersed in hide-and-seek
Between customers at the market fruit stand where the woman in the pink blouse and sunhat patiently passes another day
Between moments of this life
Even if in the between times
Life needs some small repairs
I still believe
The days go by and I do not look back
Life continues on
But not quite, not quite

I figured I would figure it out. Even if one is unsure, one can act on the testimony of Scripture: “My grace is sufficient for you…”