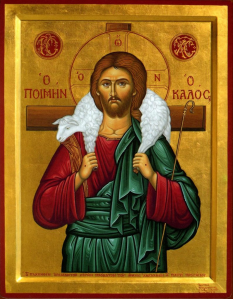 The Good Shepherd. At v.11, the focus shifts to Jesus’ self-revelation as the good shepherd. The identifi­cation of Jesus as the shepherd was implicit in the figure of speech in vv.1-5, but it is made explicit for the first time here. As before, the positive image of the good shepherd (vv.11, 14-16) is contrasted with a negative image, that of the hired hand (vv.12-13).

The “I am” saying of v.11a is explained exclusively in metaphorical language in vv.11b-­13. That is, after the initial use of a first-person singular pronoun, Jesus never refers to himself directly again. Instead, he draws on images de­rived from the OT to explain what he means by “good shepherd.” The adjective “good” (kalos) also has the meaning “model” or “true,” and the reference point for what constitutes a model shepherd is set by the image of God as the good shepherd in Ezekiel 34. According to Ezek 34:11-16, God the good shepherd cares for the sheep, rescuing them from the places to which they have been scattered, feeding them, and tending to the weak, the injured, and the lost. By identifying himself as the good shepherd of Ezekiel 34, Jesus thus identifies himself as fulfilling God’s promises and doing God’s work (cf. 4:34; 17:4).

A Willingness to Lay down his life. Verse 11b pushes beyond the imagery of Ezekiel 34 in its reference to the shepherd’s willingness to lay down his life for the sheep. A possible OT antecedent may lie in the messianic oracle of Zech 13:7-9, in which the death of the shepherd is required so that the flock can be purified. Verse 11b may also have points of contact with Palestinian shepherding practices; a good shepherd may indeed have to give up his life to prevent the decimation of his flock by wild animals. Yet the reference to the shepherd’s laying down his life is cast in a distinctive Johannine idiom (10:15, 17-18; 13:37-38; 15:13; 1 John 3:16), so that the reader of the Gospel cannot help hearing in Jesus’ words an allusion to his own death. Verses 15 and 17-18 will make those associations with the death of Jesus explicit, but at this point Jesus stays within the metaphor of shepherding. He works to build the interpretive frame of reference before he turns more directly to his own life and death.

In Relationship with God. Jesus’ self-revelation in vv.14-16 weaves back and forth seamlessly between figurative and non­figurative speech. Jesus begins by once again iden­tifying himself with the image of the good shepherd (v.14), but explains that image primar­ily by making reference to his ministry and rela­tionship to God, rather than by staying within the images of sheep and shepherd as he did in vv.11-13. This move between figurative and non‑figurative speech results in some ambiguity in interpreting Jesus’ words. This ambiguity is imme­diately evident in v.14b. When Jesus speaks of his relationship with his own, he may be speaking within the shepherding figure (cf. vv.3-4), but the expressions “my own” (to ema) and “his own” (hoi idioi) also describe Jesus’ relationship to his followers in John (e.g., 1:11; 13:1; 17:9-10). Verse 14b suggests that the line between metaphorical and direct speech is very thin in this section of the discourse.

Verse 15b makes the connection of Jesus’ death and the shepherd’s death (cf. v.11) explicit. The juxtaposition of vv.15a and 15b suggests again that Jesus lays down his life not simply because of his relationship to the sheep (as in the image of the shepherd in v.11) but because of his relation­ship with God. The reference in v.16 to other sheep has particular relevance in the setting of Jesus’ conversation with the Pharisees. Jesus is suggesting here that his flock is not limited to the sheep of Israel and that the community created by his death will include people from outside of Israel (cf. 12:32). The mark of this expanded flock will be that “they will listen to my voice,” a trait that distinguishes the flock from the Jewish leaders who neither listen to nor know Jesus’ voice (cf. 8:43; 10:6). To hear Jesus’ voice is the mark of faithfulness to Jesus and his word (cf. 5:24; 10:27; 12:47).

The final image of v.16 returns fully to the sheep metaphor. The vision of a united flock recalls the final promise of Ezek 34:31: “You, my sheep, you are the sheep of my pasture, and I am your God.” Jesus once again positions himself as the fulfillment of promises traditionally associ­ated with God. Jesus the good shepherd will bring about unity in the flock through his relationship with God and his death (v.15).

1 thought on “The Good Shepherd: Jesus”