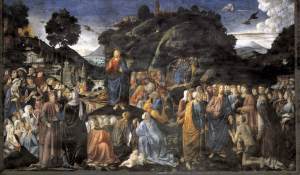 The identity of Jesus is a consistent issue in Mark. In the gospel, we hear the opinions of rulers, religious authorities, crowds, disciples, and family members. Witherington [193] points out the simple sentence, “Is he not the carpenter, the son of Mary…” is asking could a child of undistinguished or dubious origins be able to interpret the Torah like this?For the author of Mark, the important question keeps coming around to “who do you — the reader — say that Jesus is?” And if you do honor Jesus as a prophet (or more than a prophet), who does that make you? Does it mean new allegiances that supersede traditional country and family values? As you answer those questions, Mark is leading you into a confession of faith.

The additional phrase “the son of Mary” is probably disparaging. It was contrary to Jewish usage to describe a man as the son of his mother, even when she was a widow, except in insulting terms. People were normally referred to as the son of their father, e.g., Simon Bar Jonah (Mt 16:16). Juel (Mark, 90) writes after discussing some variant readings: “The copyists (and Matthew) recognized the implied insult in speaking of Jesus as Mary’s son: it is an intimation that he was illegitimate (a claim presumed in later Jewish legends and in the Fourth Gospel [John 9:29])”. Rumors to the effect that Jesus was illegitimate appear to have circulated in his own lifetime and may lie behind this reference as well. The rhetorical question of the people indicates that they know Jesus only in a superficial way. They find no reason to believe that he possesses the anointing of God.

Jesus responded with an aphorism to which there are numerous parallels in Jewish and Greek literature. The comparison of his experience to that of the prophets who were dishonored among their own people is ironical. It anticipates his ultimate rejection by Israel and at the same time recalls 3:20–21, 31–35 when Jesus’ family and kinsmen expressed the opinion that he was insane and attempted to halt his activities forcibly.

Mark 6:3 Is he not the carpenter. This is actually a question in Greek that expects a positive reply. He worked as a “craftsman” (tekton), a term often rendered “carpenter,” because woodworking is the most likely referent (supported by widespread tradition in the early church associating Joseph with carpentry, though in 1 Kgs 13:19 (LXX) the term refers to a stone craftsman). The passage then lists members of Jesus’ family.

Significant strands of the Marcan textual tradition agree essentially with the Matthean formulation: “Is this not the son of the carpenter? Is not his mother called Miriam?” (Mt. 13:55). Moreover, against the allegation of Celsus that Jesus was only a carpenter Origen answered forthrightly that in none of the Gospels accepted by the Church was Jesus himself designated a carpenter. While the textual question is so complex that equally competent interpreters have adopted differing points of view, it seems preferable to adopt the text of the uncials in which Jesus is designated “the carpenter, the son of Mary.” The variant reading was apparently conformed to the text of Matthew in the interest of the virgin birth and perhaps to avoid the attribution of a menial trade to Jesus when to do so in the Graeco-Roman world would be to invite scorn.

the son of Mary. This reference is unusual because normally the son’s father would be named, in this case, Joseph. It may allude to Jesus’ unusual birth and show an awareness that Mary was Jesus’ mother in a way that Joseph was not his father. It also might simply indicate that Joseph was then deceased. Or it may well meant to give offence and refers to a questionable birth.

The brother of ….: Mark 6:17 uses the term brother for the half-brothers, Herod and Philip, who were Herod’s sons by different mothers. Therefore, it is not possible to tell whether the brothers and sisters of Jesus are biological children of Mary or her stepchildren. Mark is not interested in specifying the precise relationship between Jesus and his other siblings. The townspeople are scandalized by the human origins of Jesus, whom they know as a carpenter.

they took offense. This term (eskandalizonto) is important in the NT; it refers to someone “tripping over” or “stumbling over” an idea so as to fall in rejecting it (see 4:17). Figuratively, it means being offended at something. It connotes a lack of belief.