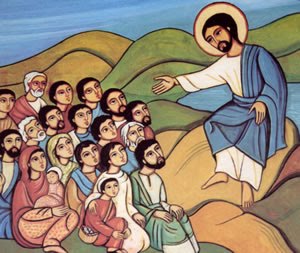 A beatitude (Latin) or makarism (Greek) is a statement in the indicative mood beginning with the adjective makarios, declaring certain people to be in a privileged, fortune circumstance. It is not original to Jesus but occurs frequently in the OT as well as in non-Scriptural Jewish and pagan writings. Used here, the beatitudes reflect the Jewish use and setting: wisdom and prophecy. In the wisdom setting beatitudes declare the blessings of those in fortunate circumstances, based on observation and experience (e.g. Sir 25:7-9), and declare their present reward and happiness. In the prophetic setting beatitudes declare present and future blessings to those who are presently in dire circumstances but who will be vindicated at the coming of God’s kingdom (e.g. Is 30:18, 32:20; Dan 12:12).  Paraphrasing Boring (177-8), to that end:

The Setting. The mountain is not a specific place, but a general term, as we might say ‘into the hills’ (cf. 14:23; 15:29; 28:16, none of which specifies the exact place; see Notes). It indicates the steeply rising ground to the west of the lake of Galilee. Such ‘retreats’ to the quiet of the hills, for prayer and teaching, are a regular feature of Jesus’ ministry.

Jesus is depicted sitting (the correct posture for formal teaching: cf. 13:2; 23:2; 24:3; 26:55; Luke 4:20), with his disciples round him. The crowds, apparently here left behind, are found in 7:28–29 to have been also listening, but that can only be as a more remote audience, for passages like 5:11–16 are clearly addressed only to disciples. Perhaps a rigid distinction between disciples and crowd should not be pressed: there were varying degrees of commitment. But the primary audience is clearly the ‘insiders’.

The Cultural Fabric of the Beatitudes. One core value among Mediterranean people – that is often missed by Western readers – is that a key cultural thread is that of honor.  It is a central value that drives all behavior. Honor is a public claim to worth and a public acknowledgment by others of that claim.  John Pilch describes how this concept is woven into the fabric of the Beatitudes:

The three basic honorable and esteemed behaviors offered by Jesus are being poor, mourning, and hungering. “Poor” in the Bible is never an economic designation. It rather describes someone who has temporarily lost honorable status and must seek at all costs to regain but never surpass that status.

“Poor” thus refers to a revolving class of people. The customary association of poor with widows and orphans confirms this notion of losing status. Widows and orphans did not have to retain this position forever. Widows could remarry (see the serious discussion of “real” widows in 1 Tim 5:3-16); orphans could be reabsorbed into an extended family. Those who lost status were culturally obliged to regain it.

There are, however, two distinctive elements in Jesus’ beatitudes. First, he says being poor constitutes true honor! Second, the passive voice in each beatitude (“will be comforted,” “be filled,” etc.) is a strategy used by our ancestors in the faith to avoid saying the name of God. Those who engage in social protest (mourning and fasting) will be comforted by whom? By God, of course! This grammatical usage in the Hebrew and Greek Bible is called, appropriately, the “theological or divine passive voice.”

In Jesus’ view, true honor and esteem are determined and bestowed by God, very publicly, for all to see. And the things that God considers truly honorable and worthy of praise are almost always the opposite of what human beings of any culture think.

Malina and Rohrbaugh (47) suggest: “Within an honor-shame setting, perhaps the best translation for ‘blessed is/are’ would be ‘How honorable …,’ ‘How full of honor …,’ ‘How honor bringing …,’ and the like. The counter to ‘beatitudes’ are the ‘woes’ or reproaches in Matt. 23:13-35; there the formula: ‘Woe to you scribes and Pharisees, hypocrites …’ ought be translated: ‘How shameless you are….’”

The Theological Fabric of the Beatitude. Throughout Matthew’s narrative the word dikaiosynē (or its adjective form, dikaios) appears is key passages (e.g. 5:6). Most translations opt for “righteousness” as the translation; the New Jerusalem opts for “saving justice.”  In all translations there is a basic concept of appropriateness – the way things ought to be – and right relationship. The word dikaiosynē, in its religious setting, means the way things ought to be between God and his people.  In other words, people are righteous when they stand in right relationship to God (the medieval Latin word for this is pietas; I will use “piety” to convey this idea).  Thus righteousness/piety implies, by extension, right relationships with everything else in one’s life: possessions (6:24), one’s neighbors (22:38-40), and even one’s enemies (5:44).  When the world is the “way things ought to be” that is Matthew’s sense of the kingdom of heaven being present in the world.  Righteousness (dikaiosynē ) is the state of affairs, all affairs, when God rules.  From our perspective dikaiosynē is faithfulness to the teachings and commandment of God as a response to the imminence of God and the kingdom.

It is in their vein that the Beatitudes declare blessedness to those committed to the future reality of the kingdom of God – even as they imply an imperative in the call to decision/commitment of a discipleship rooted in dikaiosynē.

The blessings of the Beatitudes are the honor and esteem that God bestows upon those who are faithful to all that He commands.  Thus Matthew makes the case that this is the way the world ought to be.

Internal Structure. Altogether there are nine beatitudes in 5:3–12, the ninth (5:11–12) is really an expansion of the eighth (5:10). Some scholars opt for a structure with three sets of three, the first eight exhibit such a tightly knit parallel structure that it is more likely that we should understand them as two sets of four. This is most consistent with Hebraic poetry forms which seem to be the literary background of the Beatitudes. Still there is an internal consistency within each “stanza/verse” as seen in the form of each pronouncement:
Blessed are they who…          (a quality/activity in the present tense)
for they will be….                    (a verb in the future; except vv. 3 and 10)

This form is repeated each time with minor variations.  The first and last beatitude have the same ending: “for theirs is the kingdom of heaven.”

However interesting, this perhaps is a bit over analyzed. It would seem a simpler model (vv. 3 and 10 in the present with the intervening verses in the future) is adequate to point to a “realized eschatology”  and the “two-groups of four” is adequate to retain the underlying poetic.

This outline is simpler and retains a central idea that the kingdom has begun to break into the world but will only be complete (fulfilled) in a future time.