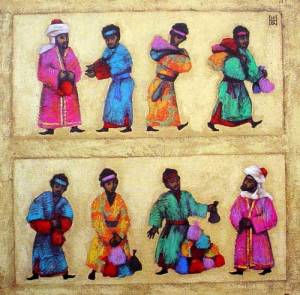 A Curious Start. 14 “It will be as when a man who was going on a journey called in his servants and entrusted his possessions to them. 15 To one he gave five talents; to another, two; to a third, one—to each according to his ability. Then he went away.” If Matthew had used a copy editor, I am sure they would be discussing the use of “it.” What will be as…? Curiously, most Matthean parables are explicit when it comes to the kingdom of heaven. The previous parable (Wise and Foolish Maidens) begins, “the kingdom of heaven will be like.” (25:1). Here Matthew begins hōsper gar, literally “for just as”, indicates that the same subject is under discussion.

The setting is similar to that of 24:45–51, focusing on the responsibility of servants in their master’s absence, but now the stakes are higher. This is not about domestic management, but about high-level commercial responsibility with an extraordinarily large capital sum to trade with. The principle of different levels of responsibility depending on the servants’ individual ability hints at the parable’s intended application. The kingdom of heaven is not a “one-size-fits-all” economy. Consider the different yields produced by the good seed in 13:8. God’s people are different, and he treats them differently; “much will be expected of those to whom much has been given.” (Luke 12:48) In the Lucan version of this parable the point is made by the different trading results of servants who are given the same initial capital; here the principle of individuality is built into the initial distribution. It will be the servants’ responsibility not to look with envy at the different hand which has been dealt to their colleagues, but to make the most of what they have, and it will be important to note that the first two servants will receive identical commendations in vv. 21 and 23 even though the sums they have gained differ, since each has succeeded in proportion to his initial endowment.

The first servant eagerness is a model for enthusiastic discipleship. He and his first colleague achieve spectacular results (100% profit), but clearly there was a risk involved, which their other coworker was unwilling to face. No doubt he would have justified his action as prudent rather than lazy (his master’s term for it, v. 26), but his prudence results in no benefit to his master. Of course there is some benefit to simply maintaining the status quo. A contemporary rabbinic axiom was “Money can only be kept safe by placing it in the earth.” (b. B. Meṣiʿa 42a).

The “long time” in this parable corresponds to the delay in 24:48 and 25:5. There is time for life (and trade) to take its normal course. What exact course is taken depends on the servant. The settling of accounts immediately on the master’s return indicates what the opening scene has not made explicit, that the master was expecting his money to have been put to good use in the interval.

Note that the master’s response to the first two servants does not depend upon the initial endowment. He welcomes each of them regardless of the their abilities, what they were given to begin with, or even the final margin of gain. Consider the workers in the vineyard (20:1–16) where some did not have the opportunity to work as long as others, but all were equally rewarded. These servants are commended, like the servant of 24:45, as “faithful:” they have done what was expected of them. But the reward for reliability, as for the servant in 24:47, is not to be released from responsibility but to be given more of it. You don’t “retire” from being a disciple. If so large a sum as five talents is “small matters,” the great things which follow will be a huge responsibility indeed. But along with the added responsibility goes a significant change of status, the new relationship of sharing the master’s joy.

In the story of the Rich Young Man, 19:28 suggests that in the “new age” the reward for faithfulness will be to share the authority of the enthroned Son of Man. Is it reading too much into our parable to envisage heaven as a state not of relaxed pleasure but of active cooperation with the purpose of God as well as enjoyment of his favor?

Matthew 25:14 It will be as when…journey: literally, “For just as a man who was going on a journey.” Although the comparison is not completed, the sense is clear; the kingdom of heaven is like the situation here described. Faithful use of one’s gifts will lead to participation in the fullness of the kingdom, lazy inactivity to exclusion from it. Entrusted: The verb paradidomi usually means, “to give or hand over” and seems to imply, “giving up control of.” There is good question whether “entrusted” is the best way to translate this word. The slaves don’t appear to give back any of the money to their master when he has returned. The one talent of the third slave is given to the first, not kept by the master.

Matthew 25:15 talents: talanton was originally a measure of weight and is variously estimated at 50 to 75 pounds. As a monetary term, its value varied depending on locale and precious metal, but it always connoted a very large sum. Some have estimated that this parable points to approximately six thousand silver denarii. This would be as much money as a day laborer could expect to earn over the span of nineteen years.

Matthew 25:18 buried his master’s money: In the unsettled conditions of Palestine in Jesus’ time, it was not unusual to guard valuables by burying them in the ground. There were alternatives. Temples, including the Jerusalem temple, functioned as banks and moneylenders were also common elsewhere in the Gentile world. Most people lacked capital, but those who had it could multiply their investment fivefold or even tenfold (Lk 19:16–18); doubling one’s investment (Mt 25:20, 22) might be regarded as a reasonable minimum return to expect in the ancient economy   Burying money at least kept that capital safe. Evidence of this is seem in Mt 13:44; and b. Bava Metzi’a 42a.   money: argyrion specifically means silver or silver money.

Matthew 25:20–23 Although the first two servants have received and doubled large sums, their faithful trading is regarded by the master as fidelity in small matters only, compared with the great responsibilities now to be given to them. The latter are unspecified. Share your master’s joy: probably the joy of the banquet of the kingdom.

Matthew 25:23 Come, share your master’s joy: literally, “enter into the joy of your master.”