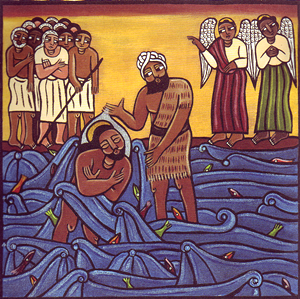 John the Baptist is a crucial figure in the history of revelation and redemption. In retrospect, his appearance in the wilderness was the most important event in the life of Israel for more than three hundred years. The absence of a prophet throughout this period had been interpreted to signify that the prophetic task was accomplished. Yet all clung to the hope that the “faithful prophet” would appear, the Prophet like Moses, whose coming would signal the events of the “last days” (Deut. 18:15–19; 1 Macc. 4:42–46; 14:44). The very fact of John’s appearance was an eschatological event of the first magnitude, and signified that the decisive turning point in the history of salvation was at hand. It was John, the preacher of radical repentance, who initiated the messianic crisis. To speak of the gospel of Jesus is to speak of the good news which began with John.

From Mark’s perspective, John is important not for his own sake but as the beginning of the unfolding drama of redemption which centers in Jesus of Nazareth. The brevity of his presentation of John serves to project into sharp relief two features of the Baptist’s ministry which were of special significance to him: (1) John’s career was the result of divine appointment in fulfillment of prophecy; (2) John bore witness to the supreme dignity and power of the Messiah, whose coming was near.

The citation of Isa. 40:3 in v. 3 explains John’s advent: the herald of the Lord will cry in the wilderness. From the point of view of transition v.4 is tied to v.3 by means of the identical phrase “in the wilderness” in both verses. Mark’s interest in the wilderness is not primarily geographical; the reference to the lower Jordan River valley fails to provide any specific information about the locale in which the Baptist ministered. But the evangelist has preserved the emphasis upon the wilderness which he found in his sources and has allowed it to shape his own theological understanding of the gospel. The historical tradition that John appeared in the wilderness establishes the relevance of the citation from Isaiah and provides the key to Mark’s concentration upon wilderness motifs throughout the prologue.

Briefly and concisely vv. 4–8 describe the Baptist’s ministry. Mark focuses attention on three elements in John’s ministry, each of which is related to the OT prophecies with which he has prefaced his Gospel: (1) John was a man of the wilderness; (2) he performed his ministry of baptism in the wilderness, and so prepared the way of the Lord; (3) he announced one greater than himself who was to come after him. Each detail of the five verses is related to one or more of these three emphases.

Those who heard John would not have failed to recognize the familiar prophetic call to repentance. But in response to his preaching John called for an action which was wholly novel—baptism in the Jordan River. It has been conjectured that John’s baptism was derived from the Jewish practice of baptizing proselytes, or from the rites of initiation practiced at Qumran. No clear line of dependence can be shown in support of these theories. Baptism appears rather as a unique activity of this prophet, a prophetic sign so striking that John became known simply as “the Baptizer.”

The absence of qualifying clauses makes it difficult to ascertain the exact nuance in the phrase, “a baptism of repentance for the forgiveness of sins.” The biblical concept of repentance, however, is deeply rooted in the wilderness tradition. In the earliest stratum of OT prophecy, the summons to “turn” basically connotes a return to the original relationship with the Lord. This means a return to the beginning of God’s history with his people, a return to the wilderness. Essential to the prophetic concern with repentance in Hosea, Amos and Isaiah is the concept of Israel’s time in the wilderness as the period of true sonship to God, a status into which the Lord is going to lead his people once again in a future time. The correlation between the wilderness and repentance was not John’s innovation and must have been understood by his contemporaries. John’s call to repentance and his call to come out to him in the wilderness to be baptized are two aspects of the same reality. It is a call to renew sonship in the wilderness. The peculiar urgency in the call lies in the fact that the crisis of God’s final act is close at hand.

The same correlation should be seen between baptism and the wilderness. The summons to be baptized in the Jordan meant that Israel must come once more to the wilderness. As Israel long ago had been separated from Egypt by a pilgrimage through the waters of the Red Sea, the nation is exhorted again to experience separation; the people are called to a second exodus in preparation for a new covenant with God. Both John’s call to repentance and his baptism are intelligible as aspects of the prophetic tradition which expected the final salvation of God to be unveiled in the wilderness.

Repentance in John’s proclamation is conditioned by the action of God, who is about to enter history in a definitive fashion. The opportunity and urgency for repentance lie in the fact that the one who will baptize with the Holy Spirit is close at hand. As the people heed John’s call and go out to him in the desert far more is involved than contrition and confession. They return to a place of judgment, the wilderness, where the status of Israel as God’s beloved son must be re-established in the exchange of pride for humility. The willingness to return to the wilderness signifies the acknowledgment of Israel’s history as one of disobedience and rebellion, and a desire to begin once more. John’s proclamation of the forgiveness of sins provides the assurance that God extends grace as well as judgment. It is in the context of judgment and grace that the people of Jerusalem and Judea go out to the wilderness to be baptized by John.