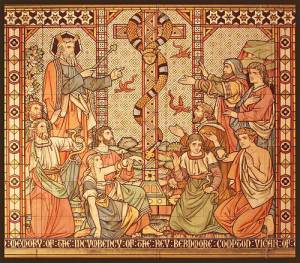 With their patience worn out by the journey, the people complained against God and Moses, “Why have you brought us up from Egypt to die in this desert, where there is no food or water? We are disgusted with this wretched food!” In punishment the LORD sent among the people saraph serpents, which bit the people so that many of them died. Then the people came to Moses and said, “We have sinned in complaining against the LORD and you. Pray the LORD to take the serpents from us.” So Moses prayed for the people, and the LORD said to Moses, “Make a saraph and mount it on a pole, and if any who have been bitten look at it, they will live.” Moses accordingly made a bronze serpent and mounted it on a pole, and whenever anyone who had been bitten by a serpent looked at the bronze serpent, he lived.

The Book of Numbers is the title of the book in English comes through the Vulgate from the LXX, which used the title “Numbers” (Vulg. Numeri LXX Arithmoi). The variant Hebrew titles come from the first word of the text (wayeḏabbēr, “and he spoke”) or, more commonly, bemiḏbar, “in the wilderness [of]”). “In the wilderness” describes the contents of the book much better than “numbers,” which is derived from the census takings of chapters. 1–4, 26.

The overall story is rather straight forward. Israel is counted by Moses, Aaron, and the leaders in order to prepare for the march to Canaan and life in the land following the conquest (chs. 1–4). After further exhortations to holy living and preparations to depart from Mt. Sinai (5:1–10:10), Israel leaves the holy mountain for Canaan (10:11–12:13). Spies are sent out from the oasis of Kadesh-barnea to reconnoiter. When they return to Moses and the people, their report is split. The majority say that the land and its inhabitants are too mighty to be taken – it is inhabited by fierce giants. The minority (Caleb and Joshua) say that, since God had promised victory, he would bring victory for Israel, despite the strength of the land and its people. The people of Israel choose to believe the majority and are ready to go back to Egypt (thus rebelling against the leadership of Yahweh as well as that of Moses and Aaron) when God intervenes and punishes their disbelief and disobedience. Because of their sin, every person over the age of twenty would wander and die in the wilderness without coming into possession of Canaan. They would wander forty years, until the whole generation was dead (chs. 13–14).

The Israelites decide to try to make things better on their own. Unassisted by God (or Moses), they try to conquer the land but are humiliated in defeat (14:40–45). So for nearly forty years the people wander around Kadesh-barnea in the wilderness until all that generation dies (chs. 16–19). They then return to Kadesh-barnea, and are told to set out once again for Canaan. They depart from Kadesh-barnea and travel to the plains of Moab, just outside the land of promise (chs. 20–21). Along the way, they win some battles, showing that the tide is turning (21:1–4, 21–35). Just outside Canaan, the people are blessed by Balaam, a foreign seer (chs. 22–24). After his blessing, they sin further at Peor and are punished again (ch. 25). On the plains of Moab a new census is taken to mark the new beginning (ch. 26). The people wait for further instructions for life in the land of Canaan, where Joshua will lead them after the death of Moses (chs. 27–36).

The Fiery Saraphs. In the midst of this larger narrative, the Israelites have just won a military victory but still clear of the Edomites as the navigate towards the promised land. Along the way, the exigencies of life in the desert once again caused them to complain – and not for the first time. Even in the face of victories such as that in 21:1–3, the Israelites’ basic character has not changed. They complain against both God and Moses because of a lack of acceptable water and food. Once more these people show themselves to be out of touch with reality as they long for Egypt and talk as if they had a choice about dying in the wilderness (cf. 11:4–6; 14:2–4). In previous times complaints about food had brought a divine supply of their needs (11:4–35), but now the response of God is to send a scourge of fiery serpents that kills many people. Again as before, the Israelites repent (11:2; 12:11; 14:40) and ask Moses to intercede with Yahweh (11:2; 12:11–13). When he does, God instructs him to construct a copper image of one of the lethal snakes and to set it on a pole where it can be seen. No one is saved from being bitten, but if one is bitten and chooses to obey God by looking at the copper snake, one will be cured from the lethal effects of the bite.

There is much speculation about the snake (“fiery” likely because of the burning associated with its bite) and why mounting a copper image of it is the means of cure. There is no firm agreement, but here is at least one interesting speculation. The people were “threatening” to return to Egypt, turning away from God towards evil. The Egyptian god Apep (also Apophasis) was the evil god who lost in battle to the sun god Re; his rival Apep was the god of death, darkness and an opponent of light – and interestingly, was also the god of medicine and healing. But there was one catch: worshippers were not to look upon the snake god. To raise their eyes and look on the snake was to receive the judgment of death from Apep and know eternal darkness. To keep one’s eyes cast down in worship was to know healing.

The command from Moses for those who had been bitten – and presumably guilty of turning away from God – was to look upon their snake god. They were facing certain death from the snake bit and knew that only the true God would save them. If they had faith in Yahewh and looked upon the image of god who was no god at all, they were healed: “anyone who had been bitten by a serpent looked at the bronze serpent, he lived.” If they refused to admit their guilt and kept their eyes cast downward in false worship, then they died, ironically suffering the very opposite fate that their former worship promised.