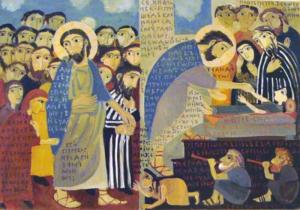 Maybe St. Mark should have begun by saying, “The kingdom of God is like…” The Gospel account tells of vulnerability among the characters and Jesus’ response to that vulnerability. It is what the kingdom is like; it is our guide to building the kingdom here and now told in the encounter with 3 people.

Three people, different in privilege and place in the world, yet each vulnerable – each in need of compassion and a healing touch. Each in need of the fulness of life promised in the Kingdom.

Jesus responds to the vulnerability of these three different characters, restoring them to health, life, and wholeness… because that’s what he does. He has just crossed the border between Israel and Gentile territory, two opposing lands and contrasting, even hostile, cultures. His mission in both territories is the same – to seek out, heal, and restore those who are most vulnerable. On one side of the border, a man possessed by actual demons; on the other side of the border our three characters beset by other demons. Jesus’ response is the same: he notices, cares for, and responds to those who are most vulnerable. Perhaps we’ve become so accustomed to Jesus’ compassionate response that it doesn’t make much of an impression on us. Perhaps we are so used to someone else being the source of needed compassion, our mission to build the Kingdom stays just out of sight in our lives.

The Kingdom is not supposed to be out of sight, it is meant to be at our fingertips. Every time this Gospel uses the Greek word for “touch” hapto, it is related to healing. The image of “touch” seems to be written into the fabric of the Scripture readings. Jairus begs Jesus to lay his hands on his daughter, the woman wants to touch Jesus, and Jesus doesn’t simply lay his hands on the young girl in healing but takes her by hand and lifts her to life. Jesus doesn’t simply respond to those in need theoretically or at a distance, but connects with them, and joins himself to them through his compassionate response – all in a touch. The kingdom of God is built a touch at a time.

The last several weeks have been busy, pastorally speaking. It has been weeks when tragedy, misfortune, fate, calamity, heart-break, and adversity all seem to drop by the parish.

But the last several weeks are also stories of how much we are all called to be a healing, compassionate presence in the lives of others. We are called to touch other people’s lives – touch as in effect, impact or change, but “touch” as in literal touching. Touch is woven into the fabric of an emerging kingdom. A kingdom that rises one touch at a time. A Kingdom seen in the

We are the young, unnamed girl clinging to life. We are the hand of God reaching out.

We are people called to build the Kingdom of God, one touch at a time.