31 Again he left the district of Tyre and went by way of Sidon to the Sea of Galilee, into the district of the Decapolis. 32 And people brought to him a deaf man who had a speech impediment and begged him to lay his hand on him. 33 He took him off by himself away from the crowd. He put his finger into the man’s ears and, spitting, touched his tongue; 34 then he looked up to heaven and groaned, and said to him, “Ephphatha!” (that is, “Be opened!”) 35 And (immediately) the man’s ears were opened, his speech impediment was removed, and he spoke plainly. 36 He ordered them not to tell anyone. But the more he ordered them not to, the more they proclaimed it. 37 They were exceedingly astonished and they said, “He has done all things well. He makes the deaf hear and (the) mute speak.” (Mark 7:31-37)

Context – This section of the Gospel of Mark is bookended by two stories of a miraculous feeding of the crowds (6:34-44 and 8:1-10), While is some debate whether the accounts act as bookends or as introductions to new section, our attention remains on stories between. Last week’s conflict with the Pharisees and Jerusalem scribes was preceded by the story of Jesus walk on the water and the healing of the crowds. What follows the conflict encounter of last week’s gospel is the healing of the Canaanite child, the cure of the deaf-mute, and the second feeding of the crowds.

But notice that Jesus “left the district of Tyre and went by way of Sidon to the Sea of Galilee, into the district of the Decapolis.” The withdrawal of Jesus to the district of Tyre may have been for a rest (Mark 7:24), but he soon moved onward to Sidon and, by way of the Sea of Galilee, to the Decapolis. Jesus has moved from Jewish territory to the land of the Gentiles. This movement follows immediately upon the conflict with the Pharisees that declared all foods are “clean” and do not defile – and now Jesus moves into contact with the Gentile people, who under some interpretations, are themselves unclear. Thus, to have contact with them renders one unclean.

If in the preceding passage Jesus “declared all foods clean” (7:19), in the stories of Mark 7 he declares all persons clean, whether a Gentile woman in a pagan city or a man of indeterminate race in the unclean territory of the Decapolis. The stories are two examples of the sample principle: Both advance Jesus’ repudiation of traditional taboos.

Although not part of the Sunday gospels in Year B, Mark’s encounter of Jesus and the Syrophoenician woman (which precedes our periscope) is worth noting as regards traditions that are being overturned. Joachim Jeremias in Jerusalem in the time of Christ [360] describes the taboos associated with the interaction men and women: “… a woman was expected to remain unobserved in public. There is a recorded saying of one of the oldest scribes we know, Jose b. Johanan of Jerusalem (c. 150 BC): ‘Talk not much with womankind’, to which was added, ‘They said this of a man’s own wife: how much more of his fellow’s wife!’ rules of propriety forbade a man to be alone with a woman, to look at a married woman, or even to give her a greeting. It was disgraceful for a scholar to speak with a woman in the street. A woman who conversed with everyone in the street could, … be divorced without the payment prescribed in the marriage settlement.” An encounter between this woman and a scribe or Pharisee would be hard to imagine in the “tradition of the elders.”

The woman’s request of Jesus is that he drive an unclean spirit out of his daughter (7:25). As Stoffregen notes, while Jesus has just declared all foods clean (v.19), that does not mean that everything is clean. There are still unclear and evil powers in the world – but this Gentile woman is not among them. What is unclean is the demon that is driven out – “what comes out.” Perhaps this narrative is also meant to linguistically point back to Jesus’ declaration, “But what comes out of a person, that is what defiles.” (v.20) even as “what comes out” from Jesus is the healing power of the divine. 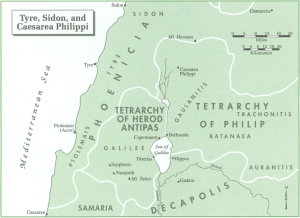 A nod to geography also seems in order. The Phoenician republic of Sidon was located on the coast some twenty miles north of Tyre. Jesus seems to have journeyed northward to the district of Sidon and then turned southeastward through Philip’s territory toward a point on the eastern shore of the Sea of Galilee within the region of the Decapolis. While the way is not specific there are no natural topological reasons why to journey is such a route, but it may have been designed to preclude the necessity of entering Galilee. Jesus remained in territory with strong Gentile associations. Yet Decapolis had sizeable colonies of Jews in nearly all of the cities. It is difficult from the text to determine whether the crowd that approached Jesus was Jewish or Gentile or a mix.