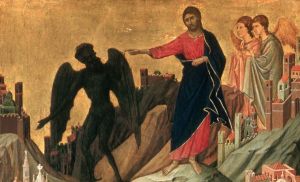 This coming Sunday marks the first Sunday in Lent (Year C). It is a special day for the catechumens and candidates in the RCIA programs around the country. Here in the diocese of St. Petersburg, all the catechumens will celebrate the Rite of Sending in the parish and then gather at the cathedral for the Rite of Election celebrated with our bishop. It is a day when the RCIA program leaders witness to our community that the folks are well prepared and ready to enter Lent and the final steps towards the celebrations at Easter Vigil.

The gospel for this Sunday is the Lucan version of the “Temptation of Christ) found in Luke 4:1-13 (on the other side of this link in a full pdf of a gospel commentary on the reading.) Here is an overview from Fr. Jerome Kodell, O.S.B. (The Collegeville Bible Commentary, Collegeville, MN: Liturgical Press, 1989.)

Before he launches out into his preaching and healing ministry, Jesus is led by the Spirit to the wilderness of Judea for a forty-day period of preparation. The Palestinian desert is not the sandy waste of the Sahara. The parts around the Dead Sea are utterly barren, but most of the Palestinian desert is semi-arid, with some vegetation, particularly in the winter. It was a dangerous place, uncharted, inhabited by wild animals and bandits. The wilderness was believed to be the haunt of demons (Isa 13:21; 34:14); it is no surprise that Jesus met the devil there. But Jesus’ forty days in the desert is meant to trigger an association with Israel’s forty years of wandering in the desert after the Exodus. Stephen’s speech in Acts describes these as years of testing and failure for the people of God (Acts 7:39–43). Jesus is also tested in the desert but remains faithful.

The account in Mark says only that Jesus was tested, but Matthew and Luke describe three temptations. These are typical of the temptations Jesus faced throughout his life and typical as well of the testing his followers will undergo. In the first and third temptations, the devil addresses Jesus as Son of God but tries to make him deviate from the path of filial obedience to the Father. Jesus is tempted to turn stones into bread, that is, to use his power for his own ends rather than to be the Messiah planned by his Father; and he is taunted to test the Father’s word rather than go forward on his mission in faith. The second temptation is an attempt to make Jesus give to someone else the allegiance that belongs p 945 to God. The devil claims that the power and glory are at his disposal; he is a liar and not to be trusted, but many before and after Jesus have fallen for this temptation.

Jesus answers all three temptations with the scriptural word of God, quoting from the Book of Deuteronomy, which described Israel’s apostasy in the desert (Deut 8:3; 6:13–16). The devil even tries to use Scripture himself (vv. 10–11), but Jesus is quick to turn aside the challenge to his Father’s fidelity. Scripture is no more authoritative than any other word if it is wrongly interpreted. The second and third temptations are transposed in Luke and Matthew, though it is apparent they are both working from the same written source. It was probably Luke who changed the order of the scenes in order to place the climax of the series in Jerusalem, which he highlights as the focus and pivot of Jesus’ saving work and the life of the early church (Luke 9:51; Acts 1:4). The story breaks off with the devil departing “for a time.” The reader will be alerted to the devil’s heightened activity at the beginning of the passion account (22:3).