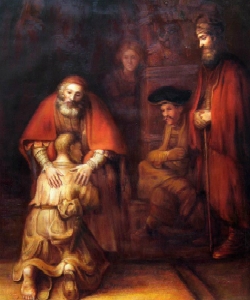 “A man had two sons …” (Luke 15:11) – such is the beginning of the beloved and well-known Parable of the Prodigal Son. But you know Scripture doesn’t come with titles for such things. That’s just what the parable has always been called. But we could call it something else. The Parable of the Waiting Father? Or perhaps the Parable of the Petulant Older Brother? I guess it all depends on what draws your interest and attention. What about you? Where are your thoughts drawn: to the younger son’s selfish greed, the older son’s arrogant fury, or perhaps the patient father’s extravagant love?

The younger son is a distant figure for me. I hope I have little in common with him – in the beginning he is impulsive, cavalier, inappropriately demanding, disrespectful and more. At first blush, I have nothing in common. At least I hope not. I have never run away, squandered gifts given to me, or led a life “a life of dissipation” as it says in scripture. Looking for some synonyms for “dissipation?” You can try, “debauchery, overindulgence, degeneracy, intemperance” at worst, but at best, we are still left with “reckless” and “unthinking.” But neither have I felt the ardent, tear-soaked embrace of a loving father welcoming me home – but then I never left. And so, I have never encountered the wild, unfettered love of reconciliation.

I have to admit I do not trust the younger son very much. “When he had freely spent everything, a severe famine struck that country, and he found himself in dire need.” Desperate times make for desperate plans. I know he needed to think through things and plan what he would say to his father but is that just the conniving snake oil salesman who already knows his father’s weak spots? I wonder if he understood or even considered the sorrow, destruction, anxiety, and wreckage he left in his wake as he headed out with his ill-gotten inheritance. Was there an ounce of empathy in his thoughts? Did he care that he ripped his father’s heart asunder? Was there any remorse, regret or repentance in his heart? Or did he just need a soft landing from his misadventures?

And you know what else I want to know? In the days after the homecoming and the party, did he get his act together? Did he join his older brother in the fields? Did he apologize? Did he make peace with neighbors? Did he respect and honor the father he had so humiliated and dishonored? Did he change?

There is a part of me that wants guarantees, wants karmic balance in the universe, wants restitution, that wants the young man to “bleed” just a bit, “bleed” repentance before I extend forgiveness.

I have to admit empathy for the younger son is not something that naturally flows from my heart. I have to think about it. Maybe in that way I am more like him than I care to admit. But I have the luxury of time to sit with the sacred story and see if empathy lays within me given the space to think and reflect.

The younger son, the one who threw away the name “son,” is the one who gives himself a new name “here am I, dying from hunger.” What hunger within him was it that lured him away from the life given him? Was it a hunger for freedom bordering on unfettered license? Was it a hunger for self-expression, novelty, rumors of a good life, a fun life away from the back-breaking field work? Whatever it was, it led him to the “prodigal” life. Those hungers led him to choices that led to death – a moral death, but also a real physical dying from hunger. Maybe in my youth I did not make the best of choices when faced with the hungers of my life. It is easy to see that the hungers of his life were not life-giving, but what about the life-giving hungers of my life? The prodigal son at least explored his hungers – to his regret one hopes. But what about me? Do I listen to the hungers that are drawing me to God, the hungers that are sending me out to the world to be the source of lavish love to all God’s people? Or do I ignore, minimize those life-giving hungers? Am I willing to be the one who says, “Here I am, living from hunger?”

Perhaps his father understood what I do not. I want the younger son to be good, stay home, and do the right things. Maybe his father understood that this would never be home unless he first left. Maybe his father knew that getting lost and being found, making his way home is part of the journey the young son needed. Maybe the father knew that this son needed to experience a dying from his hungers in order that he could experience a resurrection in coming home.

The father trusted the son to make the journey, where I blame the son for the journey. He let the son go where I would have grounded him at best or counted him banned at worst. “While he was still a long way off, his father caught sight of him, and was filled with compassion. He ran to his son, embraced him and kissed him.”  I would not have been on the lookout for him. The father understood.  He possessed a deep and patient wisdom of how life and desire actually work.

I don’t trust that young man. I am suspicious of his motives. Yet he makes me question whether I am willing to take the risks he took to address the life-giving hungers God has placed with me. I am not too empathetic to that young man and it makes me wonder if my empathy takes a back seat to karmic balance. But maybe at the root of it all, I am envious. His Father ran to welcome you.  He cared for nothing in this world so much as having his son safe and enwrapped in his arms.  To hear we are loved is one thing; to feel ourselves embraced is another.  That young man is fortunate.  Does he know that?  Something envious in me wants to make sure he knows it.

But I am glad that he made it home. There is hope. For him, for me, and for us all. Amen.

1 thought on “Hungers, Empathy and Homecoming”