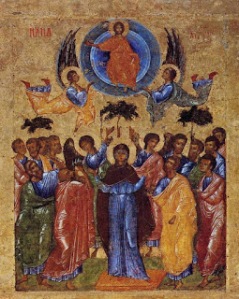 This coming Sunday marks the 7th Sunday of Easter (Year C); however, most dioceses will celebrate the Ascension of the Lord.

46 And he said to them, “Thus it is written that the Messiah would suffer and rise from the dead on the third day 47 and that repentance, for the forgiveness of sins, would be preached in his name to all the nations, beginning from Jerusalem. 48 You are witnesses of these things. 49 And (behold) I am sending the promise of my Father upon you; but stay in the city until you are clothed with power from on high.” 50  Then he led them (out) as far as Bethany, raised his hands, and blessed them. 51 As he blessed them he parted from them and was taken up to heaven. 52 They did him homage and then returned to Jerusalem with great joy, 53 and they were continually in the temple praising God.

From the earliest times in the church, there was a danger of docetism, the heretical belief that Jesus was God behind a thin veneer of humanity: thus his suffering was only playacting, and his resurrection was simply a return to a completely spiritual existence with no bodily effect. The Letters of John combated this error (1 John 4:2–3; 2 John 7). The narrative which precedes our passage stress that Jesus’ resurrection body is real. The disciples touch him; the marks of the passion are visible in his hands and feet; he eats with the disciples.

Even though they have already heard about the earlier appearance. They are still excited and tense with the unfamiliarity of it all, and Jesus suddenly appears in their midst. His question to them is rhetorical, a way of introducing the Scriptural instruction that will help them to assimilate the truth of this marvelous event. The Old Testament is referred to in a traditional way by naming its three collections: law, prophets, and psalms (usually “writings”) – Luke 24:44. His words commissioning them as witnesses of his resurrection foreshadow the Acts of the Apostles. The “promise” of the Father is the Holy Spirit who will be given to empower them to fulfill their mission (Acts 1:8).

The gift of power is related to being witnesses of these things –  not only to experience them, but to spread the experience to others.

Luke’s Gospel ends with the fulfillment of the journey begun in 9:51 (see Acts 1:2). Here the ascension takes place on the day of resurrection; in Acts, it takes place forty days later (Acts 1:3, 9). The ascension as the exaltation of Jesus as the risen Lord at the right hand of the Father took place immediately as part of the resurrection triumph, but his visible leave-taking of the community happened at some later time. The accounts vary because Luke treats the same event from two points of view: in the Gospel the ascension is the climax of Jesus’ work; in Acts it is the prelude to the church’s mission.

Theologians also see in the Ascension the taking into heaven of the humanity of Jesus. The Incarnation is not something casual and fleeting but a divine action with permanent consequences. If the Ascension means the taking of Christ’s humanity into heaven, it means that with it will be taken the humanity which He has redeemed—those who are Christ’s, at His coming. It is a powerful expression of the redemption of this world, in contrast to mere escape from it.

Bethany is on the far side of the Mount of Olives, which lies east of Jerusalem (Acts 1:12). Jesus’ blessing indicates his handing on of the mission to the disciples and his promise of assistance as they carry it out. The whole scene is reminiscent of the blessing by the priest in Sir 50:20–21 (see also John 20:21–23). The Greek word for “homage” or “worship” (v. 52) is used for the first time in the Gospel for reverence toward Jesus (earlier it was given to God the Father: 4:7–8). The cross and resurrection has revealed his divinity.

The Gospel ends in the temple, where it began. Christianity at this point is still understood as the fulfillment of Jewish promises within Israel, not something radically separate from Judaism. The first Christians are faithful Jews. Their mission is still within Judaism (Acts 1–7) until they are led beyond under the Spirit’s guidance. The disciples are not despondent at the departure of Jesus (compare John 14:1). They are full of joy, understanding the fulfillment of Jesus’ mission and awaiting the gift he has promised.

Luke 24:47 repentance, for the forgiveness of sins, would be preached in his name to all the nations: Jesus had indicated how Scripture was fulfilled in his passion and resurrection (road to Emmaus). Now he indicates Scripture being fulfilled in the preaching of repentance and forgiveness of sins. In his name connects this repentance and forgiveness with what Jesus is and has done. People are not called to a repentance based on general principles and to a forgiveness always available. Luke is speaking about what Christ has done for people and what is available through him. This Evangelist’s universalism comes out in his reference to all nations. It is no forgiveness available for a few pious or nationalistic souls, but for all people.

Luke 24:49 the promise of my Father: i.e., the gift of the holy Spirit. The risen Jesus has the power to send the Spirit. The disciples are not to attempt the task of evangelism with their own meager resources, but are to await the coming of the Spirit.

clothed with power from on high: The note of power is significant, and on high reminded them (and reminds us) of the source of all real power for mission.

Luke 24:51 taken up to heaven: Luke brings his story about the time of Jesus to a close with the report of the Ascension. He will also begin the story of the time of the church with a recounting of the Ascension. In the gospel, Luke recounts the Ascension of Jesus on Easter Sunday night, thereby closely associating it with the resurrection. In Acts 1:3,9–11; 13:31 he writes of a forty-day period between the resurrection and the ascension. The Western text (manuscript) omits some phrases in Luke 24:51,52 perhaps to avoid any chronological conflict with Acts 1 about the time of the ascension.