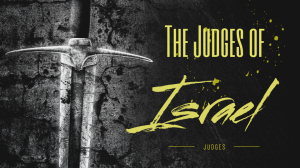 The Book of Judges remains a bit of a mystery to lots of Christians, although some of the more notable names from Old Testament scripture are from the Book of Judges: Deborah, Sampson, and Gideon. The Hebrew word translated “Judges” in the English title of the book refers not to specialized judicial officers or magistrates but to leaders in general. According to the biblical narrative these judges led Israel from the end of the conquest of Canaan until the beginning of the monarchy. The period of the Judges, therefore, extended from the death of Joshua (Jos 24:29–31; cf. Jgs 1:1) until the installation of Saul as Israel’s first king by the prophet Samuel, who was also the last judge (see 1 Sm 7:15–17).

It is thought that the Hebrew people entered Palestine, settled in tribal areas, while forming a coalition or federation of mutual support and defense. But they were not the only people in the land: Edomites, Moabites, Canaanites, Midianites, Amorrites, and the Philistines to name a several. If one was looking for a thematic description of the period of the Judges, it would be a cyclical pattern of infidelity to God and His covenant, oppression by the one “ite” or another, crying out to God for deliverance, and God’s raising from among them a judge to restore right relationship with God and to defeat the oppressors.

There are the major judges (Othniel, Ehud, Deborah, Gideon, Jephthah, and Samson) and six others known as the minor judges… and then there is Abimelech. He is always listed apart as his career is presented as deplorable, a cautionary tale of royal ambition.

The people of Israel grew weary of the cycle and began to consider having a king, a strong hand to rule over them. In other words, some of them were done crying out to God for rescue and wanted to crown Abimelech as king. But who? The great Gideon had 71 sons; 70 by wives and one by a Shechemite concubine (Shechem in Canaan), Abimelech. Long story told short, ambitious Abimelch killed 69 of his half-brothers. One escaped: Jotham. Jotham is the narrator of the parable that forms today’s reading.

All well and good, but the story of the people of Israel, Abimelech and Jotham are but a prelude to the final break from the Judges to the period of Kings. This account is told in 1 Samuel 8. The people are warned about turning away from God and having a king, but they respond: “No! There must be a king over us. We too must be like all the nations, with a king to rule us, lead us in warfare, and fight our battles.” (1 Sam 8:19-20).

This points ahead to Christ, our true King, and the scene before Pilate, when the chiefs priests yell out: “We have no king but Caesar.” (John 19:15).  The past is indeed prologue to the future.