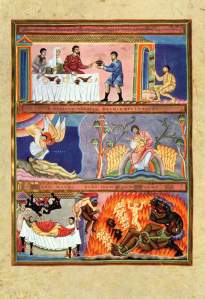 This coming Sunday marks our journey in Ordinary Time, the 26th Sunday in Year C. You can read a complete commentary on the Sunday Gospel here.

19 “There was a rich man who dressed in purple garments and fine linen and dined sumptuously each day. 20 And lying at his door was a poor man named Lazarus, covered with sores, 21 who would gladly have eaten his fill of the scraps that fell from the rich man’s table. Dogs even used to come and lick his sores. 22 When the poor man died, he was carried away by angels to the bosom of Abraham. The rich man also died and was buried, 23 and from the netherworld, where he was in torment, he raised his eyes and saw Abraham far off and Lazarus at his side. 24 And he cried out, ‘Father Abraham, have pity on me. Send Lazarus to dip the tip of his finger in water and cool my tongue, for I am suffering torment in these flames.’ 25

Abraham replied, ‘My child, remember that you received what was good during your lifetime while Lazarus likewise received what was bad; but now he is comforted here, whereas you are tormented. 26 Moreover, between us and you a great chasm is established to prevent anyone from crossing who might wish to go from our side to yours or from your side to ours.’ 27 He said, ‘Then I beg you, father, send him to my father’s house, 28 for I have five brothers, so that he may warn them, lest they too come to this place of torment.’ 29 But Abraham replied, ‘They have Moses and the prophets. Let them listen to them.’ 30  He said, ‘Oh no, father Abraham, but if someone from the dead goes to them, they will repent.’ 31 Then Abraham said, ‘If they will not listen to Moses and the prophets, neither will they be persuaded if someone should rise from the dead.’”

This coming Sunday marks our journey in Ordinary Time, the 26th Sunday in Year C. You can read a complete commentary on the Sunday Gospel here.

Recall that in successive weeks we have heard the parable of the Prodigal Son (15:11-32) followed by the story of the Dishonest Steward (16:1-13) – both stories featuring rich men and concern the handling of money (among other key topics). This week our reading against features a rich man but this time in contrast to the poor Lazarus (16:19-31).  The in-between verses, vv.14-18, begin with the phrase, “The Pharisees, who loved money.” Jesus describes these people as an “abomination” (bdelygma) before God (v.15). Johnson (Luke, Sacra Pagina, 255) writes about this word:

Its first and most obvious reference is to “idolatry” in the biblical tradition. But the term is also used in two other important connections in Torah, once in condemning financial misdealing (Dt 25:16), and once in condemning a divorced man cohabiting again with his former wife (Dt 24:4). Idolatry, money, and divorce are joined by the term bdelygma.

This directly speaks to the Pharisees as ones who are ignoring the warning of v.13 “You cannot serve God and mammon.” Since they love money, they are not serving God. Allan Culpepper (Luke, 312) notes that vv.14-15 introduce the first part of the parable of the Rich Man and Lazarus, while vv.16-18 in turn foreshadow the reference to the law and the prophets in the second part of the parable.

Perhaps our parable is better titled “Rich Men and Lovers of Money” in order to convey its thematic unity and serve as an apocalyptic warning to those who pursue the treasures of earth; they are “an abomination in the sight of God” (v.15).  Certainly that is the fate of the rich man in our parable and the fate that awaits his five brothers.  Tempting as the title is, the title then also runs the risk of losing sight of Lazarus, the parable’s protagonist who never speaks a word. While such an emphasis points to the rich man’s torment as a fulfillment of the earlier warning: “His winnowing fan is in his hand to clear his threshing floor and to gather the wheat into his barn, but the chaff he will burn with unquenchable fire” (3:17) one may lose sight of the fulfillment that the kingdom of God belongs to the poor and the hungry (6:20-26).