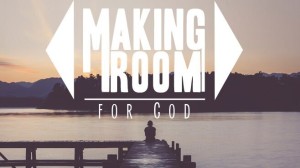 There was a married couple that upon reaching retirement age, the wife announced that they were going to make some changes in their life. They were going to lose weight, get in shape, and start living right so that they could enjoy their well-earned rest with a new quality of life. In no uncertain terms she announced that her husband’s standard diet of bacon, bratwursts, and beer would be replaced by diet based on bran! He was to discover the plethora of recipes based on bran. But, besides becoming quite regular, he was making a new life. In the ensuring months and years, they lost a lot of weight, became more active in life and in the parish, and had a great quality of life.

They reached their early 90s and passed into the bright glory of the Kingdom of Heaven. Upon entering the pearly gates, the husband was overcome by the love of God, the beauty of the heavenly realm, and an experience of wholeness and holiness he had never known. He turned to his wife and said, “Honey, I will love you for all eternity… but I do want to point out that if we had done it my way, we would have been here a lot sooner!”

This is the time of year when I am asked, “Hey Father, do you have any suggestions about what I should give up for Lent? It is ingrained in our memory and tradition that we give up something. Certainly bacon, bratwurst and beer might make the list. But there are others that I more often encounter.

“Hey Father, I am gonna’ give up chocolate for Lent!

“OK, but I know you really like chocolate. Is giving it up going to make you miserable?”

“Will it make the people around you miserable?”

“Tell me again why you are giving up chocolate. Today’s gospel says: ‘When you fast, do not look gloomy like the hypocrites. They neglect their appearance, so that they may appear to others to be fasting.’ What do you think? Think there might be a parallel between a gloomy appearance and your misery? Just asking…

“And…just curious…how is giving up chocolate going to make room in your life for God? Might not be much space left depending on your degree and level of misery.”

There is certainly something commendable about giving up something that is significant in your life, but there is always an element of mindfulness that needs to accompany it.  While we often think of Lenten observances in the traditional categories of prayer, fasting, and alms giving, I would suggest that all these traditional practices should be viewed with a measure of “do they make room for God in my life?” Alms giving by reflex and without following contemplation and prayer…not sure how that outwardly good practice, makes room in your life for God.

Maybe this Lent, when asked, I might make the same recommendation to everyone: “get a Lenten two-fer” by giving up some of your habits and practices with your smart phone.

Just about everyone has a smart phone. Our cell phone number is becoming like a second social security number. It is increasingly how we reach out into the world and how the world reaches us. And each year it increasingly absorbs more and more of our attention, energy, and “room” in our life. Facebook, Instagram, TikTok, Netflix, YouTube, Spotify, WhatsApp, FaceTime, whatever new thing has launched since I started this homily – and I have only just scratched the surface above and beyond talking and basic text messaging. Every one of these apps is a potential blackhole of time, energy, and attention. Not leaving a lot of time, a lot of room for family, friends, or for God. That is one side of the two-fer.

The other side is that your smart phone can also be the gateway to some amazing Lenten practices. The daily Scripture readings can be delivered to your fingertips. There are great Lenten reflections that can be daily sent to you. Today’s parish email suggested a few Lenten reflection series available to you from Bishop Parkes, Bishop Barron, Dynamic Catholic, and more. All of them great opportunities to make room in your life for God.

This Lent we all have a great opportunity to change our own smart phone culture and habits. One person who begins can make all the difference in the lives of others as well as their own. Do you know the name Shondra Rhimes? She graduated from a good Catholic high school in Chicago, then Dartmouth College, film school at USC, and entered the world of movie and television production. Shonda Rhimes is one of the most successful people in television. As the creator of hit shows like “Grey’s Anatomy,” “Scandal” and “How to Get Away with Murder” she’s a rock star. You might imagine that she is a driven, all-hours, manic person of our entertainment business stereotypes. But no. Her email signature says, “I do not answer calls or emails after 7 p.m. or on weekends, and if you work for me, may I suggest that you put down your phone.” She is quite mindful and intentional about making room in her life for herself and her family. Because of her example, the entire production company and staff take on the same practices. All experience a better quality of life. Her mindfulness became her practice. Her practice became her character. Her character became example. Her example changed lives.

She gave up post 7:00 pm-online connection to make room in her life for what mattered. It was her two-fer: give up something to make room.

This Lent maybe you can change your email signature, then give up something. Whatever your Lenten practice I pray that it makes room for God in your life.