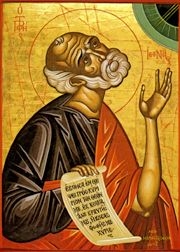 When last seen Jonah had booked passage for Tarshish in order to flee as far from God and the prophetic mission as possible. It certainly was his decision to make, but one of the points I believe the author is making is that our decisions are (a) never isolated from our other decisions, they form the path we walk, the character we are developing, and (b) never isolated from others. Consequences pour out from our choices into the lives of others. His personal choice leaves in place the wrecking ball of evil that is Assyria and Nineveh. He could choose to fulfill his mission and either (a) they are destroyed or (b) they repent. Either way the “wrecking ball” is out of action. But he is too self-centered, selfish to potentially sacrifice himself for the others, for the mission. And now he will drag others down by his choice to run.

And so, we continue our look at the Book of Jonah, remembering that the author places this chain of events before us, this descent into the consequences of his choices. Note the language from Jonah 1:3: “He went down to Joppa, found a ship going to Tarshish, paid the fare, and went down in it to go with them to Tarshish, away from the LORD.” And this will not be the only times that Jonah is depicted going “down.” Each step, each choice along the way adds to the slow descent into darkness, away from the mission to be a light to the nations.

The consequences of Jonah’s choice come swiftly and violently:

4 The LORD, however, hurled a violent wind upon the sea, and in the furious tempest that arose the ship was on the point of breaking up. 5 Then the mariners became frightened and each one cried to his god. To lighten the ship for themselves, they threw its cargo into the sea. Meanwhile, Jonah had gone down into the hold of the ship, and lay there fast asleep.

Before we dive into these two verses, there are a couple of interesting linguistic gems that might be helpful. In the Hebrew, it can be right translated, “The Lord, however, hurled down (ṭûl) a violent wind.” Perhaps I make too much of the thing, perhaps not. But it makes me wonder if there is an intention with God’s action here. Is it possible that the author already having placed “down” before us as the trajectory of Jonah choices and path, is showing God as responding, “OK, you’re headed “down” so let me accelerate the process so that you can hit bottom and we can resolve this thing.” Of course, the simplest explanation is that in the mind of the author, God is in heaven, and the direction to earth is “down.”

Another fascinating phrase is “the ship was on the point of breaking up.” The translator of the NAB opted for a “snapshot” of the state of things with the expression “was on the point of.” Most other versions translate the same phrase as “the ship threatened to break up.” This better captures the Hebrew “ḥā·šǎḇ” which makes the ship alive and a participant in its own fate. The word ḥā·šǎḇ can mean consider or think about. So, how bad was the storm? Even the ship was thinking about breaking up.

Linguistic gems aside, it was a “furious tempest.” Seafarers have their own catalog of storms they have experienced. Just hang around sailors and soon enough you will hear the phrase, “That was nothing, let me tell you about the storm in….” Each storm is worse in the telling that the just-narrated account. The worst ones are the one in which no one returns to tell the story. And that is what is unfolding here.

To the original hearers, there may well be a couple of things coming to mind. One might simply be storms are vehicles for the wrath of God breaking upon humanity:

“See, the storm of the LORD! His wrath breaks forth in a whirling storm that bursts upon the heads of the wicked. The anger of the LORD shall not abate until he has carried out completely the decisions of his heart. In days to come you will understand fully.” (Jeremiah 23:19-20)

Another may well be, “Alright, Jonah is about to pay the price for his running away from the Lord.” But at the same time, they likely feel some compassion for the sailors that have been enveloped in the consequences of Jonah’s choices. The sailors are “frightened” – yā·rē(ʾ). The word is straight forward, “to be afraid.” But in Hebrew it can also carry the sense of “revere” as in “fear of the Lord.” So, for all manner of reasons, we should not be surprised that “each one cried to his god.”

I think lots of modern readers pass over this last phrase. The clear meaning is that these sailors are not Jews which is consistent with what we know about the Jewish people. They were farmers, tradesmen, sheep herders, stockmen, and fishermen – but mostly just on the Sea of Galilee. There is some evidence that during the peak of the Davidic kingdom under the reign of David and Solomon, there was a viable seafaring industry, but as the kingdom waned, so did the offshore ventures. After the Babylonian Exile, it seems the Mediterranean voyages, merchant routes, and commerce were generally left to others, principally the Phoenicians, but others as well – “The ships of Tarshish sailed for you with your goods; you were full and heavily laden in the heart of the sea.” (Ezekiel 27:25) So, it would not be surprising to the original hearers that the captain and the crew were not Jews. And as such, likely being members of a polytheistic cult, “each one cried to his god.” We’ll return to this.

Let me quickly comment on “To lighten the ship for themselves, they threw its cargo into the sea” You might wonder why they would do this. There are several ways in which the captain/crew are compensated for their work.  Perhaps they are paid a fee for transport and take no ownership of the cargo, but it was just as common for them to take ownership of cargo with their profit coming at the point of sale at another port. Either way, they are tossing their livelihood into the sea.  Why would they do that? Remember “the ship was on the point of breaking up”? The weight, distribution and movement of the cargo all add additional strain on the structure of the ship. As a last-resort option, jettisoning the cargo may well save the ship and the crew. This jettison of the cargo points to the severity of the storm.

Still, “each one cried to his god.” This is a religious S.O.S as each one prays to his god; one of those gods is behind this, right? So, they are “shot gunning” prayers across all the spectrum of gods. It is to their credit that even they can see that this is no ordinary storm but betrays a divine reaction to some grave sin. But alas, the tempest rages: they can’t have called on the right god yet. Left to their own efforts, they begin to jettison cargo in an attempt to save themselves. But if their prayers were no solution, neither are their works. One feels sorry for them, caught up unawares in the consequences of Jonah’s decisions.

This is an “all hands on deck” effort, right? Meanwhile, Jonah had gone down into the hold of the ship and lay there fast asleep. The original hearers as well as modern ones have to wonder, “how in the world could he be curled up fast asleep when the tempest rages? I know some people can sleep through anything, but really?” Good question, but to linger on that very valid question, is, I think, to miss one of the author’s points.

The sailors/pagans, are keenly aware of the divine reckoning, while the “man of God” continues to descend further into a state of slumber – real and spiritual. It is quite intentional that the author repeatedly inserts “down” into the narrative.” I would suggest this is a depiction of sin resulting in a pathway to an unconscious sleep/existence where Jonah is unable to participate in God’s effort to offer mercy and grace, not just to the Ninevites, but even to this captain and crew.

Jonah knows the Lord is “gracious and merciful God, slow to anger, abounding in kindness, repenting of punishment.” (Jonah 4:2). He knows who God is, and knows that if he goes on God’s mission, God will find a way to redeem Nineveh – and Jonah does not want that. He thinks he knows better than God; that the world will be a better, safer place with the Ninevites annihilated. Arrogance, pride, hubris – there is a whole slate of sins from which to choose. And he has chosen. And there are consequences: his sin separates him from God, physically and spiritually. He is descending, spiraling down into spiritual unawareness, oblivious to the havoc and chaos around him.

Who suffers?  Not Jonah, he is asleep; everyone else is suffering as a result of Jonah’s bad decision. His selfishness has led him to a place where everyone else around him is suffering, facing ruin. He is a relational wrecking ball to those around him. This is the nature of sin, and its consequences in life. We too often operate with, “it’s a private decision, no one’s hurt.” But every moral decision is a small brick forming your path. In the process we make 1,000 small moral decisions, moral compromises and then the 1001st decision pours over into ruination of other people’s lives. The private relationship between God and Jonah, is now a wrecking ball in the lives of the sailors. But Jonah is so checked out, so unaware.

And it did not happen all at once.

How about us? Are we suffering from spiritual apathy, spiritual slumber, unaware – asleep at the wheel, so to speak? It happens to us in parts of our lives that are routine, regular, we can sort of “sleepwalk” through the day. It’s doing the laundry, but you forget to put in the detergent. It’s the example of “yes dear” and then later you realize you have no idea of what was asked. It happens to all of us.

It is a degree of disengagement in the day, in the week, and lives – and our spiritual live are not exempt from this phenomenon. Once we were spiritually alive, prayer was easy, we were engaged in Mass and ministry, and then one day… yikes! We were asleep, just cruising, curled up in the corner.

How did this happen? Sometimes it just the season of life. We are busy with education, careers, family, children – you know the regular stuff of life. Sometimes it is our spiritual routine. Someone once described the life of faith as a long obedience in the same direction. But one day we awake and recognize there is not the same vitality of life, faith, love, and spirit.

Could be the seasons of life, but also because of the decision we make – some large, most small, some regular life, some moral, some are compromises, and then we find ourselves at the end of this concatenation of decisions that land us at the place of spiritual apathy.

Jonah 1 is a portrait of spiritual apathy when we are asleep at the wheel. It is a cautionary tale for those who would listen. There is a lot more going on than sailors swapping tales of the storms they survived. But the goal is not simply to survive, but to be spiritually alive – to thrive. And if we discover we are not, then to do something about it.

The sailor’s overall plan is not too bad: pray and jettison the things that weigh you down.