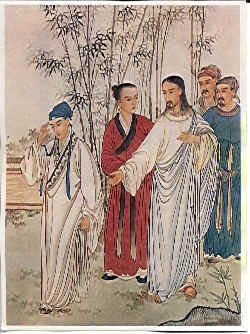 This coming Sunday is the 28th Sunday in Ordinary Time in Cycle B of the Lectionary. It is a familiar story: “As [Jesus] was setting out on a journey, a man ran up, knelt down before him, and asked him, “Good teacher, what must I do to inherit eternal life?” (Mark 10:17). Matthew refers to him as “a rich young man.”

In this part of Mark’s account, Jesus has been consistently teaching his disciples the meaning of the Kingdom in his examples and explanations: greatness means to serve the least among the people (9:36-37).  He has already told them that the path of discipleship will consist, not just of demonstrations of power (healing and casting out demons), but also one in which one “must deny himself, take up his cross, and follow me.” (8:34) At times these lessons have come at the end of a dispute with the Pharisees or scribes as we saw in the previous Sunday gospel. There Jesus tells the disciples about the creative intent of God in the formation of marriage and family (10:2-16) as a means of describing the Kingdom echoed in human experience.

The story of the rich man is found in all three synoptics (Matthew, Mark and Luke), with individual variations. Matthew (Matt. 19:20) remarks on his youth, while Luke records that he was a ‘ruler’ (Luke 18:18). And without comment, all gospel writers point to his great possessions (Mark 10:22), so different from the ‘evangelical poverty’ in which the disciples lived. What is unsaid in all the gospels is the perception of wealth among “good people.” Who would be better qualified for the kingdom other than those people God is clearly blessing with wealth, prestige, and privilege? Well, at least in the estimate of the standards of 1st century Palestine – and in some measure, today also. There are more than one church that proclaims wealth as the fruit of one’s faith and God’s blessing. Seen in that wider perspective, the story of the rich man is more than simply an expression of Jesus’ attitude to wealth; it is part of a broader critique of conventional human values. It is well placed following the passages in which Jesus points to the children and least among us as the ones we are to serve.

As with last weekend, in this Sunday gospel, the idea of the Kingdom remains key. More to the point, this passage addresses the essence of Jesus’ teaching concerning entrance into the Kingdom of God. Perhaps not as apparent in the previous Sunday gospel, when modern listeners tend to focus on divorce and adultery, this gospel makes clear the giftedness of the Kingdom. Entrance into eternal life is not earned, but is accepted in love. But Love has its demands. The call to self-denial in order to follow Jesus, sounded earlier in 8:34–38 and 9:33–37, is repeated in v. 21. The demand imposed upon the man who wishes to enter the Kingdom (cf. Ch. 9:42–50) is heightened, and the utter impossibility of attaining the Kingdom through human achievement is underscored in v. 27. The incident of the wealthy man who sought out Jesus in order to learn the requirements for securing eternal life provides the setting for a startling proclamation of the demands and the nature of the Kingdom.

The man, upon hearing the demands of entry into the kingdom, was disheartened and went away sad. How about the disciples? In the following Sunday gospel, after the 3rd prediction of the Passion, they will return to their arguments about ambition. Perhaps “blind ambition,” as this scene will be followed by the encounter with Blind Bartimaeus.

It is good to recall the words of Jesus already given: “…but worldly anxiety, the lure of riches, and the craving for other things intrude and choke the word, and it bears no fruit.” (Mark 4:19)