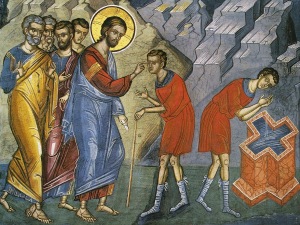 Commentary. If you wanted a one sentence summary – here it is: “I came into this world for judgment, so that those who do not see might see, and those who do see might become blind”(v.39). Or: as a sign that he is the light, Jesus gives sight to a man born blind. But there is a richness to be gained in a detailed looked at the text and narrative. The Johannine scholar, Fr. Raymond Brown suggests the following outline:

The Setting. Verses 1-5 narrate the situation of need that evokes the miracle, but they provide an interesting twist on the traditional miracle story form. The man’s blindness is stated as a fact in v.1, but he is not an active character in the story until v.7. He makes no request of Jesus to be healed (cf. 4:46.-54), nor does Jesus engage in any conversation with him about his healing (cf. 5:1-9a). Rather, the blind man’s initial narrative function is as the catalyst for the conversation between Jesus and his disciples in vv. 2-5. This is the first appearance of Jesus’ disci­ples in the Gospel since 6:60-71 and their first mention since 7:3. The disciples would have been an unessential presence in chaps. 7-8, where the focus was on establishing the lines of conflict be­tween Jesus and the Jewish religious authorities.

The metaphorical use of “day” and “night” in v. 4b signals the contingency of Jesus’ presence as the Logos. Day will come to an end with the arrival of Jesus’ hour (see the use of “night” in 13:30). Day and night are paired in 11:9-10 with a similar metaphorical meaning. Verse 5 makes the metaphor and its contingency (“as long as”) explicit: Jesus’ presence in the “world” (kosmos) is the light that makes God’s work possible (cf. 8:12).

The Healing.  The sign/miracle is simply told.  Many ask why Jesus used the mixture of earth/dirt and saliva to make clay and then put it on the eyes of the man? There is no simple answer.  Some find an echo of the Creation story (Gen 2) – although there God breathes life into the human being.  There is an part of John’s gospel (John 2-3, “the next day…the next day….the next day…the third day”) where the inspired author lays out a new creation account – one that comes to fore in the sign of broken humanity being made whole – all seen as metaphor via the man born blind.  But that is theological musing and has brings with it its own problems.

Water for the Pool of Siloam was channeled through Hezekiah’s tunnel from the Gihon spring. The Pool of Siloam was the source of the water used in the water-pouring ceremonies during the Feast of Tabernacles. The evangelist explains that Siloam means ‘Sent’. The consonants of the Hebrew verb ‘to send’ (šālaḥ) are the same as those of the Hebrew for Siloam (šilôaḥ), which allowed popular etymology to make the link. Perhaps the evangelist added this explanation to connect the name of the Pool with the fact that Jesus sent the man there to wash, so as to make clear that the miracle occurred because Jesus sent him, not because of any healing qualities in the water itself.

It is notable that the miraculous healing does not occur in the presence of Jesus himself (cf. 4:46-54).

Throughout the millennia, many have seen a possible connection with washing in the pool of Siloam and Baptism. The most common parallels notes are that

John 9:4 Night is coming when no one can work: Clues appear later in the Gospel as to when this “night” occurs. As Jesus approaches his Passion he will warn the people, “You are going to have the light just a little while longer” (12:35). When Judas leaves to betray Jesus it is said, “And it was night” (13:30). This is the beginning of the Passion, when Jesus will be taken from them for three days (cf. also Lk 22:53). When the light is absent it is night, and the night for John is when Jesus is absent, as Jesus himself says in verse 5: While I am in the world, I am the light of the world. Thus, the night seems to be the time when Jesus is absent from the world between his death and resurrection, since thereafter the Spirit will be present (20:22) who will continue Jesus’ work through the disciples. Through this strong warning, which regards such a limited period of time, we are led to see the enormity of the darkness of those three days in salvation history.

John 9:6 made clay with the saliva: The use of saliva for medicinal purposes was common in the ancient world and Jesus himself uses it in his healings at times (Mk 7:33; 8:23). Clay also could have associations with pagan healing practices, in particular with the cult of Aesculapius. But for the healer to make clay out of spittle and use it for healing is unusual. John emphasizes this mud in the repeated recounting of the event by the former blind man (9:6, 11, 15) and also by including it where it is unnecessary (v. 14). Some suggest that this emphasis may be intended to draw a contrast with Aesculapius, but more likely the allusion is to the biblical picture of God as a potter and human beings as clay (for example, Job 10:9; Is 45:9; 64:8; Jer 18:6; Sirach 33:13; cf. Rom 9:21). smeared: The verb translated ‘smeared is epichriō, which means ‘to anoint’. It is found only here and in 9:11 in the NT. According to the Mishnah, normal anointing such as one might do on weekdays was allowable on the sabbath, but anointing with special substances not normally used was forbidden because that constituted a healing activity that was not allowed (Šabbat 14:4).