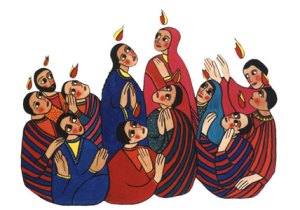 “As the Father has sent me, so I send you” The Fourth Gospel speaks often of Jesus being sent into the world by the Father: to do his will (6:38–39; 8:29), to speak his words (3:34; 8:28; 12:49; 14:24; 17:8), to perform his works (4:34; 5:36; 9:4) and win salvation for all who believe (3:16–17). That the disciples were sent to continue the words and works of Jesus is foreshadowed at various places in the Gospel: Jesus urged them to lift up their eyes and see fields ripe for harvest, and told them he had sent them to reap where others had labored (4:35–38), he said those who believed in him would do the works he had done and greater works than these because he was returning to the Father (14:12); he told them, “I … chose you and appointed you to go and bear fruit that will remain, so that whatever you ask the Father in my name he may give you” (15:16), saying that when the Paraclete comes “he will testify to me. And you also testify, because you have been with me from the beginning” (15:26–27), and when he prayed for his disciples he said to the Father, “As you sent me into the world, so I sent them into the world” (17:18). This last text, which parallels 20:21, confirms that the sending of the disciples was ‘into the world’, i.e. with a mission to the world. The other texts reveal the essential content of their mission was to ‘harvest’ men and women for the kingdom by their witness to Jesus by word and deed, alongside the ongoing witness of the Spirit.

“Receive the holy Spirit” Verses 21–22 are a key passage in Johannine theology. The disciples receive the Holy Spirit at this second coming of Jesus: the eschaton, the final era, is now; future is present. In 7:39, the Spirit had not yet been given, since Jesus was not yet glorified. On the cross, Jesus, manifesting the nature of God, which is love, delivers over the Spirit (19:30), symbolized immediately afterward by the flow of the sacramental symbols of blood and water. And now, at his first encounter with the believing community, he breathes the Spirit again as he celebrates the re-creation of God’s people. Simultaneously, he sends out these disciples just as the Father had sent him (v. 21). His mission becomes theirs; his work is placed in their hands. And that mission, that work, is to manifest God who is love in their words and deeds. Through them now, enlivened by the Spirit, will the presence of God become known and seen and felt in the world. .

Although the text does not use parakletos, there is unanimity among commentators that the Holy Spirit is that Advocate promised in the Farewell Discourse of the Fourth Gospel. That discourse had outlined the role the Advocate/Holy Spirit would play in relation to the disciples. The Holy Spirit will:

Fr. Raymond Brown nuances these promises in that the parakletos describes that aspect of the Holy Spirit which is specifically concerned with witness so that a believer is assured of all the power needed to be witness. Brown [1139-43] makes a case that the full power of the Holy Spirit manifest in others ways not connected to the witness of the person/community – e.g. baptismal regeneration, sacramental forgiveness of sins, and gifts that build up the community.

Thus Jesus’ words about sending his disciples as the Father sent him applied immediately to the apostles both with respect to Christian mission and to them in their specific roles/gifts within the church. It is in Baptism that all believers are privileged to share in this Mission in so far as they all are recipients of the Spirit whom he bequeathed to his disciples (see 20:22). With the particular enabling that Spirit provides, each plays a part in continuing the work and witness of Jesus. What is clear in text such as 1 Cor 12:3-12 (the second reading on Pentecost Sunday, Year A) – to one a particular gift is given, to another, another gift – all from the same spirit.

20:21 As the Father has sent me, so I send you: By means of this sending, the Eleven were made apostolos (apostles), that is, “those sent” (see John 17:18), even though John does not use the noun in reference to them. A solemn mission or “sending” is also the subject of the post-resurrection appearances to the Eleven in Matthew 28:19; Luke 24:47; Mark 16:15. Especially in John one must also keep in mind the Messiah’s mission: “For God did not send his Son into the world to condemn the world, but that the world might be saved through him” (John 3:17).

20:22 he breathed on them: The word used for ‘breathe’ is emphysaō, which, though found only here in the NT, occurs several times in the LXX, where it refers to God breathing life into the man formed from the dust (Gen. 2:7; cf. Wisdom 15:11), Elijah breathing into the nostrils of the widow’s dead son while calling upon the Lord to restore his life (1 Kgs. 17:21), and Ezekiel prophesying to the wind to breathe life into the slain in the valley of dry bones (Ezek. 37:9). The words “on them” do not appear in the Greek text

Receive the holy Spirit: In many places in the Fourth Gospel the promise of the Spirit is foreshadowed (1:33; 4:10, 13–14; 7:37–39; 14:16–17, 26, 28; 15:26–27; 16:7–15). The clearest of these is 7:39, where, following Jesus’ promise of streams of living water for those who believe in him, the evangelist adds, ‘By this he meant the Spirit, whom those who believed in him were later to receive. Up to that time the Spirit had not been given, since Jesus had not yet been glorified.’ In John 7:39 we learn that the Spirit will be given when Jesus is glorified because until this moment, the role the Spirit is to point to Jesus (14:26, 15:26), but now the Spirit becomes the animating dynamos for mission in the world. This scene is often understood as the Johannine version of Pentecost.

There are problems with such a view. Thomas was not included (20:24), nor was there any great change in the disciples’ behavior—they were still meeting behind closed doors when Jesus next appeared to them (v.26). If in addition one is trying to harmonize all the Gospels, then one wonders how to explain Pentecost (assuming harmonization is a valid way to compare the Synoptic Gospels and John – and there are serious questions regarding such an effort). Some scholars have suggested v.22 constituted a lesser bestowal of the Spirit to be supplemented with a greater endowment at Pentecost, or that what Jesus was bestowing was not the personal Holy Spirit (the promised Paraclete) but some impersonal power/breath from God. There is little to support either of these views in the Fourth Gospel. Another view is that there was a real impartation of the personal Spirit on this occasion, but that the Spirit was only experienced as the Paraclete, the one who replaced Jesus’ earthly presence, after Jesus’ final post-resurrection appearance and ascension. Finally, there is the view that Jesus’ action was symbolic, foreshadowing the bestowal of the Spirit to take place on the Day of Pentecost. All the explanations’ problems assume a harmonization with Pentecost and do not simply let John tells his account.