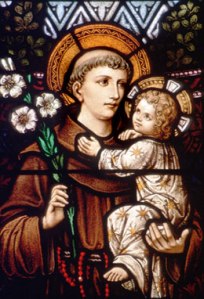 Miracles and Traditions of St. Anthony. St. Anthony Bread is a term used for offerings made in thanksgiving to God for blessings received through the prayers of St. Anthony. Sometimes the alms are given for the education of priests. In some places parents also make a gift for the poor after placing a newborn child under the protection of St. Anthony. It is a practice in some churches to bless small loaves of bread on the feast of St. Anthony and give them to those who want them.

Different legends or stories account for the donation of what is called St. Anthony Bread. By at least one account it goes back to 1263, when it is said a child drowned near the Basilica of St. Anthony, which was still being built. His mother promised that if the child was restored to her she would give for the poor an amount of corn equal to the child’s weight. Her prayer and promise were rewarded with the boy’s return to life. END_OF_DOCUMENT_TOKEN_TO_BE_REPLACED 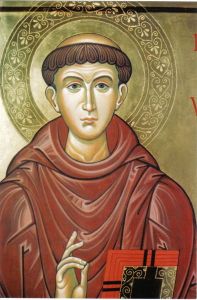 Public Preacher, Franciscan Teacher. Anthony’s superior, St. Francis, was cautious about education such as his protégé possessed. He had seen too many theologians taking pride in their sophisticated knowledge leading to an abandonment of their commitment to a life of real poverty. In Anthony, however, he found a kindred spirit for his vision, who was also able to provide the teaching needed by young members of the order who might seek ordination. Francis wrote in 1224, “It pleases me that you should teach the friars sacred theology, provided that in such studies they do not destroy the spirit of holy prayer and devotedness, as contained in the Rule.” He thereby entrusted the pursuit of studies for any of his friars to the care of Brother Anthony. From then on his skills were used to the utmost by the Church. Occasionally he took another post, as a teacher, for instance, at the universities of Montpellier and Toulouse in southern France, but it was as a preacher that Anthony revealed his supreme gift. END_OF_DOCUMENT_TOKEN_TO_BE_REPLACED

Before He Was Anthony of Padua.  Anthony of Padua was born Fernando Martins de Bulhões on August 15, 1195 in Lisbon, Portugal. His was in a very rich family of the nobility who wanted him to become educated, and they arranged for him to be instructed at the local cathedral school. Against the wishes of his family, however, at the age of 15 he entered the community of Canons Regular at the Abbey of St. Vincent on the outskirts of Lisbon. Monastery life was hardly peaceful for young Fernando, nor conducive to prayer and study, as his old friends came to visit frequently and engaged in vehement political discussions. END_OF_DOCUMENT_TOKEN_TO_BE_REPLACED

For more than 100 years, Sacred Heart Catholic Church (in downtown Tampa, FL) had been under the pastoral guidance of the Jesuits. When we Franciscans arrived at Sacred Heart in 2005, we were quite surprised to find that one of the clerestory windows (the ones up high in the nave vault) was Saint Anthony of Padua, a Franciscan contemporary of St. Francis of Assisi.  In fact, we Franciscans still have a brief letter, in Francis’ own hand, written to Anthony. Most people know St. Anthony of Padua as the patron saint of lost and stolen articles, but have you ever wondered why he is that particular patron saint? END_OF_DOCUMENT_TOKEN_TO_BE_REPLACED