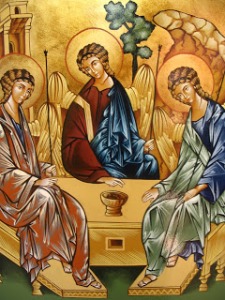 Years ago, while a Franciscan novice, my fellow friars and I attended a gathering of all the Franciscan novices, men and women, who lived in the Eastern United States. During our week-long gathering, each group was responsible for leading morning or evening prayer, or animating the Eucharistic celebration. One morning, a group of Franciscan sisters was responsible for morning prayer. Just before we were to begin, the leader of prayer explained that we would not being using the traditional words associated with the sign of the Cross. Rather, we would say “In the Name of the Creator, the Redeemer, and the Sanctifier.” She explained this was a way to remove the gender bias from the opening of prayer and so to make all feel welcomed. END_OF_DOCUMENT_TOKEN_TO_BE_REPLACED