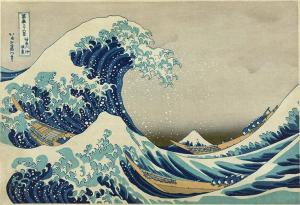 There has always been ocean lore that proclaims rogue, monster waves rising 80, 90, or 100 feet high or more. Of course, these are not eye-witness accounts. Men in wooden ships don’t survive such an encounter. There was the story of the Alaskan Tlingit Indian woman who returned from berry picking to find her entire village disappeared. The debris field evidence on the shoreline indicated that the ocean had risen up and fell upon the village. The wave would have been more than 100 feet high to cause the damage. Experts of the day dismissed stories about such waves because they seemingly violated basic principles of ocean physics.

It was only 15 years ago when the British research ship Discovery was caught for seven days in a punishing North Sea storm that legend became scientific fact. The battered ship straggled into dock, and grateful scientists unlashed themselves from their bunks, tiptoeing around bashed furniture and shattered glass. They discovered that despite the Armageddon-like conditions, the ship’s research collecting devices had kept on working. And indeed, they recorded seas consistently 60 feet high, with some waves spiking at 90 feet and higher. The evidence was in, and soon became overwhelming as downward looking satellites began confirming that rogue waves rose out of the world’s oceans with alarming frequency. In the decade the followed, there is a measurable increase in the frequency of such monster waves.

When ocean scientists are asked about such phenomena, and often in the context of global warming and its cousin climate change, their response is “what we are recording shows there is simply more energy in this closed system called earth – and the energy has to go somewhere.” The ocean scientists conclude that the future most likely points to meaner hurricanes/tsunamis, more/larger waves, and higher ocean levels as ice caps recede in advanced melting. Given that 60 percent of the world’s population lives within 30 miles of a coastline, wave science is suddenly vital science, and the experts are keenly aware that there are levees, oil rigs, shorelines, ships and millions of lives at stake. 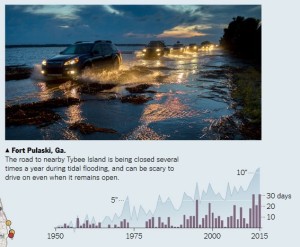 Residents of Tybee Island, Ga understand the importance. The only road to Tybee Island, Ga. is disappears beneath the sea several times a year, cutting the town off from the mainland. Ocean scientists have documented a sharp jump in this nuisance flooding — often called “sunny-day flooding” — along both the East Coast and the Gulf Coast in recent years. The sea is now so near the brim in many places that they believe the problem is likely to worsen quickly. Cities such as Norfolk, Va., Ft. Lauderdale, Wilmington NC, and Charleston, SC all are experiencing more sunny-day flooding. In many of the worst-hit cities, mayors of both parties are sounding an alarm. “I’m a Republican, but I also realize, by any objective analysis, the sea level is rising,” said Jason Buelterman, the mayor of tiny Tybee Island, one of the first Georgia communities to adopt a detailed climate plan.

As the problem worsens, experts are warning that national security is on the line. Naval bases are threatened; they can hardly be moved away from the ocean, yet much of their land is at risk of disappearing within this century. “It’s as if the country was being attacked along every border, simultaneously,” said Andrea Dutton, a climate scientist at the University of Florida and one of the world’s leading experts on rising seas. “It’s a slow, gradual attack, but it threatens the safety and security of the United States.”

Recently in the Tampa Bay Times an interesting Op-Ed piece appeared by Richard Jacobs, senior counsel in a Tampa law firm and an expert in tax law. His point was relatively simple: Florida, in order to make itself attractive to business, has lowered business taxes and is ever more dependent on property and sales taxes from a state where most of us live in coastal communities. He makes the case that storm surges and rising ocean levels will greatly erode the tax base of the State. This is just another water issue facing the state of Florida along with salt-water intrusion, water sheds and the aquifer, Lake Okeechobee, storm-flooding of sewerage systems, increased taxes, and more. 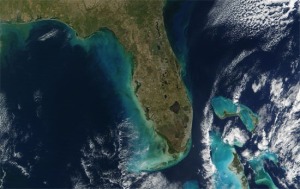 As citizen of this great state, we are called to be attentive and concerned. But what about as citizens of the Kingdom of God? How are we called to view the problem in terms of our faith? What is the Catholic Church understanding of the Gospel and faith issues involved? What do the Pope and our bishops have to teach about this key local topic of water?

The Care for Creation ministry is looking for folks who would like to take an in-depth look into “Faith and Florida Water Issues.” If you are interested in being part of and shaping the discussion, please contact Br. Aaron at the parish office.