The Franciscan friars of Holy Name Province have served at Sacred Heart in Tampa since 2005. The friars assumed pastoral leadership from the Jesuits of the Southern Province who had well served the people since 1882. The Jesuits and their tradition continue for the citizenry of Tampa through their ministry at Jesuit High School. The Jesuits have left their mark in downtown by the amazing edifice that is our church. Their legacy also is appropriately displayed in their motto, Ad Majorem Dei Gloriam, “to the greater glory of God,” which adorns the arch over the transept/sanctuary.

During the 2009 restoration of the church interior, the friars had hoped to add their own Order’s motto upon the facing arch: Deus Meus et Omnia. The words, “my God and my all” have been the hallmark of the Order for more than 800 years. What is the old expression? “He who hesitates…” Sadly, the scaffolding came down and the moment passed.

Since then, parishioners have asked us if we would consider some appropriate project that was uniquely Franciscan in character as a way to say, “today – this is who we are! – we are a Franciscan parish.” In the intervening years there have been other items of prayer, worship, faith, community, and mission that rightly have demanded our focus and attention.

From time to time the questions again are raised, ideas are floated, and I wonder where all this falls in the priority of “things.” What’s the old expression? “He who hesitates….” One of the challenges is to honor the legacy of 117 years of the parish and the 105 years of the church structure. When you look around inside, one realizes there are not many degrees of freedom for additions or changes that do not disturb the cohesiveness of the interior and the flow of the original design.

One might ask the question, could we do something around the main altar? But the question dies on the vine, so to speak, as people intuitively know any such suggestion is a non-starter. How about the side altars? While there are some “what about” remarks, they get the same response. And as you look around the church you realize there is simply an innate beauty inside the church, in particular and as a whole, that says, “it is finished.” The artist need add no more touches; the piece is done.

As custodians of the church, we Franciscans take the guardianship of beauty as a sacred task. It is an idea that holds great weight in the Franciscan tradition among friars such as St. Bonaventure, Blessed John Duns Scotus, and St. Francis himself. Someone once asked me why it took so long to address the sound system problems in the church. Debt, mission, and money were basic reasons, but even when we reached the point we could undertake the project, guardianship of beauty was a critical element. It was not until we came up with a design that, as best as could be done, integrated the major speakers into the church design. Once in a while, someone will ask me where the sound comes from – and then I know we have done well.

In the last frantic scramble for some idea, perhaps we could do a gigantic mural in the choir loft. You know one of those football stadium banners extolling the virtues of St. Francis and the Franciscan vision. One of our parishioners works for a company that sells such things to NFL stadiums. Whadda’ think? There is the wisdom that no idea is ever a bad idea. It can always serve as an example of what not to do.

In 2014 we designed the entry of the church to address aging and safety issues. Although working with limited space, we worked to create an inviting “plaza.” The project was successful.

The left side of the drawing, “the Twiggs Street side,” was designed with a space available for exterior statuary. As you know, the final space contains a small garden area with a statue of Mary and a bench for a moment of quiet in the city. The area marked in red shows there remains a space available that would be suitable for an outdoor project. 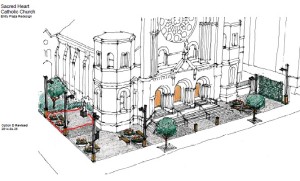 In on-going conversations with the members of the parish council, parishioners and friars, I came to the idea that we should consider a statue that is uniquely Franciscan in character and told a story that goes to the heart of the Franciscan charism. The stories of St. Francis are many, as are commercially available statues. The overwhelming majority are statues of the saint, most often surrounded by small animals. This reminded me of bookshelf porcelain figurines, portraying St. Francis as a friend of nature, but they do not tell a compelling story of the saint.

All good things come to those who wait. In the spring of 2017, I was approached by a parishioner who wanted to become more involved in the parish. We arranged to meet one day at the parish office to explore her interests. Francesca Bacci is a professor of art history at the University of Tampa – and has an expertise in medieval art by a range of artists, all of whom also had works that were quite notable in the Franciscan world. My first thought was a summer course on the works of Giotto di Bondone, whose works adorn the Franciscan churches of Assisi and Florence.

While chatting about the amazing art in Assisi and Florence, the conversation turned to San Damiano. Dr. Bacci asked if I remembered the statue of Francis at San Damiano. Anyone who has been to San Damiano knows the work showing St. Francis in contemplation overlooking the plains below Assisi.

The artist is Dr. Bacci’s father, Fiorenzo Bacci! Over the course of the next several weeks, I was able to review a full portfolio of Bacci’s works. His works are amazing – both his religious and secular works – and are displayed from Italy to Australia.

We had found the artist, but now we needed to think about some possibilities for the story that would be told in the art. There are lots of things that can be said about St. Francis and his life. There are many things for which the Franciscans are known. But I continued to return to the question of how has the presence of the Franciscans changed the parish and its people. When we ask long-time parishioners, new parishioners, and visitors alike, about their experience of the parish a theme quickly emerges in the words used to describe their experience: welcoming, inclusive, hospitable, friendly, warm, open, and more. They give testimony that the Franciscans have built a sense of belonging whose identity is to reach out and draw in quite different people to build one community. One community where hospitality, healing, hope, and holiness are values that are lived. It seemed to me the story of St. Francis and the Wolf of Gubbio was a story that gave witness to the parish and spoke to the role still to be played within our local community.

During the Christmas holiday, Fiorenzo Bacci came to Tampa to visit his daughter and his grandchildren. His sense of the scale, scope, and possibilities of the project confirmed our thoughts and plans. And so, we are moving ahead with plans to place a work of bronze-cast art on the Twiggs Street side of the church. What is the artwork? For that answer, you’ll have to see next week’s column!