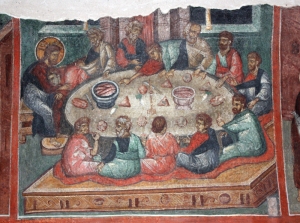 12 On the first day of the Feast of Unleavened Bread, when they sacrificed the Passover lamb, his disciples said to him, “Where do you want us to go and prepare for you to eat the Passover?” 13 He sent two of his disciples and said to them, “Go into the city and a man will meet you, carrying a jar of water. Follow him. 14 Wherever he enters, say to the master of the house, ‘The Teacher says, “Where is my guest room where I may eat the Passover with my disciples?”’ 15 Then he will show you a large upper room furnished and ready. Make the preparations for us there.” 16 The disciples then went off, entered the city, and found it just as he had told them; and they prepared the Passover.

The episode of the preparation of the paschal meal is parallel in structure to Mark 11:1–7. The commissioning of two disciples for the performance of a task, the precise knowledge of what they would encounter, and the exact response to be given to the responsible party are features familiar from the earlier account. The two incidents are entirely independent but they have been described according to a common scheme.

Clearly, as with the colt, Jesus’ instructions indicate that the divine Hand is directing the events. What is often overlooked is the moniker “Teacher” and “disciples.” From what we know of 1st century Passover celebrations (and that if from a late 2nd century Jewish document (Mishna)), the celebration was primarily between family members. Jesus will celebrate as a teacher. Given the disciples were all observant Jews, it is not too far a stretch to imagine that Jesus intends to teach something new associated with this Passover observance.

Mark 14:17 Passover: The Passover meal of the Hebrews celebrated their deliverance from Egypt. (“The Lord will go by, striking down the Egyptians. Seeing the blood … on the doorposts, the Lord will pass over that door and not let the destroyer come into your houses to strike you down,” Exod 12:23).

17 When it was evening, he came with the Twelve. 18 And as they reclined at table and were eating, Jesus said, “Amen, I say to you, one of you will betray me, one who is eating with me.” 19 They began to be distressed and to say to him, one by one, “Surely it is not I?” 20 He said to them, “One of the Twelve, the one who dips with me into the dish. 21 For the Son of Man indeed goes, as it is written of him, but woe to that man by whom the Son of Man is betrayed. It would be better for that man if he had never been born.”

Unlike the Gospel of John where light and dark have symbolic meaning, here “it was evening” sets the stage for the Passover celebration. The Passover meal, which in distinction from ordinary meals began only after sunset and could last until midnight, had to be eaten within the walls of Jerusalem. Jesus therefore returned to the city after sundown, with the Twelve, to share the paschal feast commemorating God’s deliverance of his people from bondage. The celebration of the Passover was always marked by excitement and the high hope that it would be fulfilled by God’s intervention once more. It was observed as “a night of watching unto the Lord” (Exod. 12:42) in the conviction that in that night they were redeemed and in that night they will be redeemed in the future. Jesus came to the city fully aware that he was to accomplish the Passover in his own person.

William Lane [501-2] provides a description of the Passover prayers which provides a much needed context for what will unfold in vv.17-26

The meal was framed within a liturgy whose core was the Passover prayer of the family head and the recitation of the Hallel psalms (Ps. 113–118). When those participating had taken their places, the head of the house began the celebration by pronouncing a blessing, first of the festival and then of the wine (M. Pesachim X. 2).41 Then the paschal company drank the first cup of wine. After this the food was brought in, consisting of unleavened bread, bitter herbs, greens, stewed fruit and roast lamb (M. Pesachim X. 3). The son then asked why this night, with its special customs and food, was distinguished from all other nights (M. Pesachim X. 4). The family head responded by recalling the biblical account of the redemption from Egypt. This instruction led naturally into the praise of God for the salvation he had provided and the anticipation of future redemption: “So may the Lord, our God, and the God of our fathers, cause us to enjoy the feasts that come in peace, glad of heart at the upbuilding of your city and rejoicing in your service … and we shall thank you with a new song for our redemption” (M. Pesachim X. 4–6). The new song was the first part of the ancient Hallel (Ps. 113–115), after which a second cup of wine was drunk. Then the head of the house took bread and pronounced over it the blessing of “the Lord our God, Sovereign of the world, who has caused bread to come forth out of the earth” (M. Berachoth VI. 1). He then broke the bread in pieces and handed it to those who were at the table, who ate it with the bitter herbs and stewed fruit. Only then did the meal really begin with the eating of the roasted lamb, and this was not to extend beyond midnight (M. Pesachim X. 9). When the meal had been completed, the head of the family blessed the third cup with a prayer of thanksgiving. There followed the singing of the second part of the Hallel (Ps. 116–118) and the drinking of the fourth cup, which concluded the Passover (M. Pesachim X. 7).

Mark concentrates the reader’s attention upon two incidents which marked the meal: the moment of the dipping of the bread and the bitter herbs in the bowl of stewed fruit when Jesus spoke of his betrayal (vv.18–21), and the interpretation of the bread and the third cup of wine following the meal itself (vv.22–25). The celebration of the meal takes a rapid turn when Jesus solemnly proclaims “Amen” announcing that one of those sharing the intimacy of the table-fellowship will betray him. The explanatory words “one who is eating with me” set the pronouncement in the context of Ps. 41:9, where the poor but righteous sufferer laments that his intimate friend whom he trusted and who ate his bread had “lifted his heel” against him.

The “woe” pronounced against the betrayer (see Notes below) is a lament. There is no condemnation; there is no vindictiveness in the pronouncement. There is a recognition that the approaching death of the Son of Man is in harmony with Scripture serves to set the result of Judas’ treachery within the context of God’s design. The heinousness of Judas’ action, however, is not excused. While the Son of Man goes to his death in accordance with the divine plan, on the other hand it were better for his betrayer had he never been born. The purpose of Jesus’ poignant warning is not primarily to affirm the fate of Judas but to underscore his own assurance of vindication. Nevertheless, the betrayer is morally responsible for his action and for the horrible character of its consequences, both for Jesus and for himself.

Again William Lane [504] has a good insight to the scene – which also carries a warning for us not to conflate Gospel accounts, but rather to let each gospel stand alone that the sacred author’s intent may be better understood”

“It is remarkable that Judas is not mentioned by name in the account. He is not introduced as one who asked “is it I?” nor is he identified as the betrayer by Jesus (cf. Matt. 26:25), and there is no reference to the fact that he left the room before the interpretation of the significance of the meal (cf. John 13:26–30). In Mark the stress falls rather upon the violation of the paschal fellowship by the presence of a traitor who must bear the onus of responsibility for his act, and upon Jesus’ knowledge that he will be betrayed by one of the Twelve and that his death is certain.”

Mark 14:17 the Twelve: We are so accustomed to saying “the twelve apostles” that we do not notice, most often in the gospels the expression is simply “the Twelve.” Modern people tend to equate “the Twelve” with being the only apostles, yet “apostles” refers to “those sent.” Hence St. Paul is rightly called an apostles as is Barnabas and John Mark. The “Twelve” refers to those men selected to represent the restoration of Israel – and so here at the beginning of the Passover meal, the term “the Twelve” takes on a significance beyond its enumeration as the Passover is the telling of the freeing of the 12 tribes of Jacob from the slavery of Egypt.

Mark 14:21 woe: In the modern American hearing, “woe” is often taken as a condemnation – it is the evangelical, hell-fire preaching that has conditioned us to understand it as such. The word ouai is used as an interjection expressing pain, lament, and sorrow [EDNT 5:540]. When Jesus says, “but woe to that man by whom the Son of Man is betrayed. It would be better for that man if he had never been born.” It is best understood as a lament rather than condemning the betrayer.