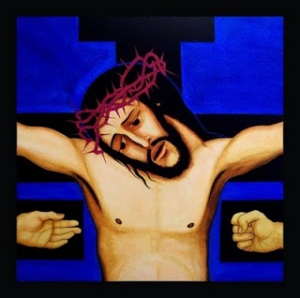 33 At noon darkness came over the whole land until three in the afternoon. 34 And at three o‘clock Jesus cried out in a loud voice, “Eloi, Eloi, lema sabachthani?” which is translated, “My God, my God, why have you forsaken me?” 35 Some of the bystanders who heard it said, “Look, he is calling Elijah.” 36 One of them ran, soaked a sponge with wine, put it on a reed, and gave it to him to drink, saying, “Wait, let us see if Elijah comes to take him down.” 37 Jesus gave a loud cry and breathed his last. 38 The veil of the sanctuary was torn in two from top to bottom. 39 When the centurion who stood facing him saw how he breathed his last he said, “Truly this man was the Son of God!” 40 There were also women looking on from a distance. Among them were Mary Magdalene, Mary the mother of the younger James and of Joses, and Salome. 41 These women had followed him when he was in Galilee and ministered to him. There were also many other women who had come up with him to Jerusalem.

At noon, the sun at its zenith, was marked by an eclipse that rendered the land dark. In Mark’s narration this covers the time from Jesus’ crucifixion until his death. It is objected that solar calculations show such an eclipse was not possible in Palestine during Passover in those days. This leaves the miraculous or the symbolic: Amos prophesied darkness at noon in the eschatological context of the Day of the Lord, where the darkness expresses “the mourning for an only son” (Amos 8:9f.). Philo spoke of a supernatural eclipse of the sun or the moon as signifying “either the death of kings or the destruction of cities” (De Providentia II. 50). The darkening of the sun marks a critical moment in history and emphasizes the eschatological and cosmic dimensions of Jesus’ sufferings upon the cross. This symbolic significance is already apparent in the Marcan time scheme: the darkness fills the interval between the crucifixion and  the moment of Jesus’ death.

But about three o’clock in the afternoon Jesus cried out in a loud voice those shattering words borrowed from Ps. 22:1, “My God, my God, why have you forsaken me?” This is the only saying from the cross recorded by Mark, and it is one of the most difficult to interpret. In Ps. 22 the initial cry is an urgent appeal for God to intervene on behalf of the righteous sufferer. Jesus, on the cross, was living out the situation described in this eschatological psalm of suffering. He instinctively expressed his feelings in biblical language, imploring the help of God in a confident invocation and an anguished plea.

There are many scholarly opinions on the meaning of Jesus’ use of the words from the Psalm. I would offer mine. The psalm expresses the spiritual desolation of a man who continues to trust and to appeal to God in spite of the fact that his ungodly opponents mock and persecute him with impunity. The cry does not imply collapse of faith in what he had already prophesied; “my God” implies continuing trust

In the end, the psalm turns to joyful thanksgiving for deliverance in vv. 22–31, and some interpreters have suggested that it is the latter part of the psalm that Jesus has in mind as well as its traumatic beginning, so that this is in effect a shout of defiant trust in the God whom he fully expects to rescue him. The modern reader, who knows the whole story, can rightfully think of Psalm 22 as an outline of the whole cross/resurrection salvation-event, which leads to the Gentile mission. This is reading a lot between the lines. Consider Gethsemane where Jesus has accepted that he must drink the cup to the full: he did not expect to be rescued. There is a modern tendency to soften Jesus’ words to keep them more divine. But in doing that the “divine” Jesus ends up being pictured as merely reciting the opening line for an outline of salvation history.

The “human” Jesus meanwhile is dying with a cry of anguish and abandonment on his lips, and yet not of despair. In the darkness and pain, he still addresses his lament to God, and as “my God.” Yet Jesus is also participating in humanity’s ultimate alienation from God in experiencing the pain of death. There is less “reading between the lines” if the words Jesus chose to utter are those of desolation, yet not without Hope and Trust even as he was dying.

37 Jesus gave a loud cry and breathed his last. 38 The veil of the sanctuary was torn in two from top to bottom. A loud cry signals Jesus’ death. Mark’s juxtaposition of the loud cry with the notice that the Temple veil is torn leads some interpreters to treat the cry as an apocalyptic sign that causes the veil to tear. The text does not make clear what is symbolized by this event or which veil was torn. There were in fact two hangings in the Jerusalem Temple. An outer curtain separated the sanctuary from the forecourt (cf. Exod. 26:37; 38:18; Num. 3:26), while the second, or inner, veil partitioned the Holy Place from the Holy of Holies to which the high priest alone was admitted on the Day of Atonement (cf. Exod. 26:31–35; 27:21; 30:6; Lev. 16:2, 12–15, 21, 23; 24:3; 2 Chron. 3:19). It is not at once apparent whether Mark’s reference is to the inner or the outer veil. A tearing of the exterior curtain would have the character of a public sign, comparable to the darkness that covered the land. The rending of the interior veil would be visible, presumably, only to a few priests and could have been concealed from public knowledge by the Jewish authorities. The detail “from top to  bottom” suggests an actual and irreversible occurrence which coincided with the moment of Jesus’ death. The reference then is to the magnificent curtain which in Herod’s Temple hung before the entrance and was visible from the forecourt when the doors were opened during the day (cf. Mt. 27:51, 54). This conclusion is supported by the fact that Jewish and Jewish-Christian traditions, which are divergent but clearly refer to the same event, speak of an astonishing happening at the entrance to the sanctuary, not at the partition between the sanctuary and the Holy of Holies

Other interpreters think that for Mark the torn veil foreshadowed the destruction of the Temple. The Gospel of the Nazarenes replaced the torn veil with the collapse of a large lintel, evidently an alternative symbol of the Temple’s destruction. Still other exegetes think that the torn Temple veil is a cosmological sign. If the outer veil, embroidered with signs of the zodiac, is meant, then the torn zodiac and the darkened sun remind Mark’s readers of the cosmic signs that will herald the coming of the Son of Man (13:24–26); darkened sun, stars falling, and disturbed heavenly powers were traditionally associated with the prelude to a divine theophany

The centurion’s confession is likewise appropriate to such a divine manifestation: “Truly this man was God’s Son!” (v. 39). This centurion’s confession recalls the two earlier examples of that identification, both spoken by the divine voice (1:10; 9:7). At Jesus’ baptism, the heavens were “opened” (schizomenous) just as the veil of the Temple is now “torn” (eschisthē). Both Moses and Elijah were present at the transfiguration, a clear sign to Mark’s reader that Jesus will be taken up into heavenly glory. In this case, a human being speaks the words of the heavenly voice. The centurion’s confession has led scholars to ponder what it was that he saw that evoked this response.

The Burial of Jesus

42 When it was already evening, since it was the day of preparation, the day before the Sabbath, 43 Joseph of Arimathea, a distinguished member of the council, who was himself awaiting the kingdom of God, came and courageously went to Pilate and asked for the body of Jesus. 44 Pilate was amazed that he was already dead. He summoned the centurion and asked him if Jesus had already died. 45 And when he learned of it from the centurion, he gave the body to Joseph. 46 Having bought a linen cloth, he took him down, wrapped him in the linen cloth and laid him in a tomb that had been hewn out of the rock. Then he rolled a stone against the entrance to the tomb. 47 Mary Magdalene and Mary the mother of Joses watched where he was laid.