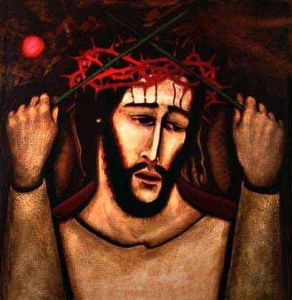 16 The soldiers led him away inside the palace, that is, the praetorium, and assembled the whole cohort. 17 They clothed him in purple and, weaving a crown of thorns, placed it on him. 18 They began to salute him with, “Hail, King of the Jews!” 19 and kept striking his head with a reed and spitting upon him. They knelt before him in homage. 20 And when they had mocked him, they stripped him of the purple cloak, dressed him in his own clothes, and led him out to crucify him. 21 They pressed into service a passer-by, Simon, a Cyrenian, who was coming in from the country, the father of Alexander and Rufus, to carry his cross.

22 They brought him to the place of Golgotha (which is translated Place of the Skull). 23 They gave him wine drugged with myrrh, but he did not take it. 24 Then they crucified him and divided his garments by casting lots for them to see what each should take. 25 It was nine o‘clock in the morning when they crucified him. 26 The inscription of the charge against him read, “The King of the Jews.” 27 With him they crucified two revolutionaries, one on his right and one on his left. 28 29 Those passing by reviled him, shaking their heads and saying, “Aha! You who would destroy the temple and rebuild it in three days, 30 save yourself by coming down from the cross.” 31 Likewise the chief priests, with the scribes, mocked him among themselves and said, “He saved others; he cannot save himself. 32 Let the Messiah, the King of Israel, come down now from the cross that we may see and believe.” Those who were crucified with him also kept abusing him.

The horrific events of the passion quickly unfold. After Jesus is scourged (v. 15), he is dressed “in purple” and “crowned” with thorns by the Roman soldiers, who mockingly call him “King of the Jews” (vv. 16–20). Through all the spitting and the beating he receives, Jesus remains silent. Mark’s readers would certainly recognize in this the fulfillment of the Isaian prophecy concerning the Messiah: “I gave my back to those who beat me …. My face I did not shield from buffets and spitting” (Isa 50:6).

The climax of the Markan drama comes in Jesus’ crucifixion. The readers of Mark’s Gospel will notice that some familiar details are missing as they read Mark’s account of the way of the cross. For example, the lamenting women of Jerusalem (Luke 23:27–31) do not meet him on the way. Likewise, both of the men who are crucified with Jesus join the passers-by in taunting Jesus (vv. 27–32), unlike what is recorded by Luke in the memorable exchange between Jesus and the “good thief” (Luke 23:40–43). Consequently, Mark’s readers are left with the starkest of pictures. Their Lord hangs alone on the cross, exposed to the mockery of the people he came to save.

Mark has arranged the taunting so that everyone rejects Jesus. Those who happen to pass by shake their heads at him (cf. Ps 22:8) and repeat the false charge that Jesus had promised to destroy the Temple and rebuild it in three days (v. 29), echoing the testimony of false witnesses in the Sanhedrin trial (14:58). Members of the Sanhedrin participate in the mockery by renewing the challenge to Jesus to save himself and adding the peculiar charges that they had formulated to serve as grounds for execution, “Messiah, King of Israel” (v. 32a). They actually taunt Jesus with the challenge to save himself from the cross by claiming that if he did so they “would see and believe” (v. 32b). Mark’s reader, knowing that even Jesus’ disciples had difficulty “seeing and believing,” cannot consider that remark anything other than vicious sarcasm. Finally, Mark adds the note that the men crucified with Jesus also mock him (v. 32c).

One of the last cries of mockery (v. 32: “Let the Messiah, ‘the King of Israel,’ come down now from the cross that we may see and believe”) becomes for Mark a profound challenge to his readers’ faith. Will they believe in Jesus precisely because he did not come down from the cross? Will they be able to see meaning in their own inexplicable suffering in the light of the absurd suffering of their Messiah and King?

Mark 15:16 the praetorium: the residence of the Roman governor. His usual place of residence was at Caesarea Maritima on the Mediterranean coast, but he went to Jerusalem during the great feasts, when the influx of pilgrims posed the danger of a nationalistic riot. It is disputed whether the praetorium in Jerusalem was the old palace of Herod in the west of the city or the fortress of Antonia northwest of the temple area. The whole cohort: normally six hundred soldiers.

Mark 15:21 They pressed into service…Simon, a Cyrenian: a condemned person was constrained to bear his own instrument of torture, at least the crossbeam. The reference to Simon of Cyrene suggests that he is familiar to the reader, who would be expected to recognize Alexander and Rufus as well (v. 21). Mark may have used this reference to Simon’s sons to provide a reliable witness to the events that occur at the crucifixion, since Jesus’ male disciples have all fled.

Mark 15:22 Golgotha: Golgotha is the Aramaic term for “skull.” The more popular name, “Calvary,” comes from the Latin term for skull, calvaria

Mark 15:24 they divided his garment…:The clothing of an executed criminal went to his executioner(s), but the description of that procedure in the case of Jesus, found in all the gospels, is plainly inspired by Ps 22:18.

Mark 15:25 It was nine o’clock in the morning: literally, “the third hour,” thus 9 am. It should be noted that this is difficult to reconcile with St. John’s account which says he was crucified at the sixth hour

Mark 15:26 the inscription…the King of the Jews: the political reason for the death penalty falsely charged by the enemies of Jesus.

Mark 15:28 an omitted verse: This verse, “And the scripture was fulfilled that says, ‘And he was counted among the wicked,’” is omitted in the earliest and best manuscripts. It contains a citation from Is 53:12 and was probably later introduced from Luke 22:37.