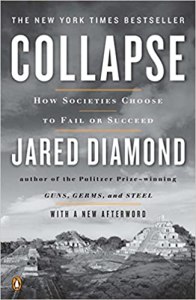 For the first 70 days of the pandemic when the area church’s shutdown, my days were long and demanding for a whole variety of reasons. Eventually we hit the steady-state of a new normal. I took a breath and decided to take up reading. I had long had Jared Diamond’s “Collapse” on my “I want to get around to reading” list. The promo for the book is “Environmental damage, climate change, globalization, rapid population growth, and unwise political choices were all factors in the demise of societies around the world, but some found solutions and persisted.”  In other words, why did some societies collapse while other survived. It is not a short read, not overly academic, but was an engaging narrative even if “slow” at times.

He describes giving a lecture to graduate students at UCLA about the collapse of the Easter Island society. At the end, a student noted that the whole society depended on the trees. So the student wondered what the person must have been thinking or said as they cut down the last tree. Another way of asking the whole society – what were they thinking?

While the very isolated Easter Island society might have been relatively simple, the book also documents the collapse of complex societies, e.g., the Mayan society of Central America. Complex societies are often characterized by central decision making, high information flow, great coordination of production, formal chains of command, and pooling of resources. All attributes that one would believe tend toward optimal decision making that stabilizes the society. And yet, some complex societies collapse.

Diamond analyzed the societies covered in his book with four factors contributing to the failure of group decision making:

Here is the State of Florida we are seeing record numbers of new Covid-19 virus cases and record numbers of hospitalizations associated with the virus. Parts of Florida are reaching 100% occupancy of ICU beds.  Certainly the medical and science community warned of this when states and localities began to relax “safer-at-home” regulations. Back on May 1st when (as predicted by IMHE) Florida reached its first “peak”, their recommendation was not to begin easing until June 22nd. That advice was not heeded.

When the easing of restriction was announced, one can ask “what were they thinking?” And the answer is other factors: unemployment, the economy, mental health re: sheltering, and other good and important things. Did they anticipate a wholesale easing (to ignoring) of masks/social distancing recommendations? Probably not.

Apart from the motivations of individuals and groups, IMHE can model the subsequent outcomes. Take a look at the model results (which have been quite accurate so far).

Where are we as a city, state and nation on Diamond’s model of group decision making?

Just some thoughts on a day off.

p.s. when I finish this post, I will fold laundry and think about the above 4-point model and the moral life. I suspect there is something there that might well frame our own individual responses to temptation, sin, conversion and more. Hmmm? Later – enjoy your day!