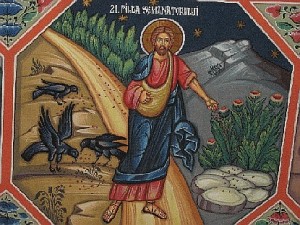 Next Sunday is the celebration of the 15th Sunday in Ordinary Time. You can read a complete commentary on the Gospel here.

1 On that day, Jesus went out of the house and sat down by the sea.2 Such large crowds gathered around him that he got into a boat and sat down, and the whole crowd stood along the shore.3 And he spoke to them at length in parables, saying: “A sower went out to sow. 4 And as he sowed, some seed fell on the path, and birds came and ate it up.5 Some fell on rocky ground, where it had little soil. It sprang up at once because the soil was not deep,6 and when the sun rose it was scorched, and it withered for lack of roots.7 Some seed fell among thorns, and the thorns grew up and choked it.8 But some seed fell on rich soil, and produced fruit, a hundred or sixty or thirtyfold.9 Whoever has ears ought to hear.”

10 The disciples approached him and said, “Why do you speak to them in parables?”11 He said to them in reply, “Because knowledge of the mysteries of the kingdom of heaven has been granted to you, but to them it has not been granted.12 To anyone who has, more will be given and he will grow rich; from anyone who has not, even what he has will be taken away.13 This is why I speak to them in parables, because ‘they look but do not see and hear but do not listen or understand.’14 Isaiah’s prophecy is fulfilled in them, which says:

Last Sunday’s gospel was comprised on the final pericope in Matthew 11; today our gospel begins with Mt 13:1.  One can rightly ask, “What happened to chapter 12?”  As it happens, Matthew 12 is not used on any Sunday or Solemnity in the church’s celebrations – and with respect to bible study, that is a critical omission because Mt 13:1-23, the Parable of the Sower along with its explanation, is Jesus’ response to the events of chapter 12.

In the New American Bible (NAB) translation used by the Church for its proclamation of the gospel, Mt 12 “headers” include the following:

Chapter 12 tells how widespread is the opposition (or resistance) to Jesus’ saving message: Pharisees, the people, and perhaps even those closest to Jesus – his disciples and family.  Signs of power and healing only lead to requests for more signs. Why do people not believe? Is there any explanation for the condition of things we have arrived at by the end of Matthew 12? Indeed there is; the explanation begins with simple words: “A sower went out to sow” (13:3)