I have always thought yesterday’s gospel was harsh. Likely, we all prefer the comforting, peaceful Jesus rather than the Jesus who proclaims: “Do not think that I have come to bring peace upon the earth. I have come to bring not peace but the sword.” And that is just the warm-up – here is what follows: “For I have come to set a man against his father, a daughter against her mother, and a daughter-in-law against her mother-in-law; and one’s enemies will be those of his household.” While I might think it harsh, perhaps a more important question is was it necessary. The Christian writer Flannery O’Connor has some insight about this: END_OF_DOCUMENT_TOKEN_TO_BE_REPLACED 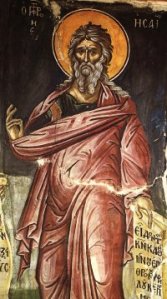 This 15th Week of Ordinary Time (2020) the first readings in the daily Masses are from the Book of the Prophet Isaiah. With other prophetic works, to talk about the writings are to talk about the prophet themselves. Isaiah calls for more nuance in that the prophet was a person of the 8th century BCE who preached to Judah (the southern kingdom) and its capital Jerusalem. It was during a particularly turbulent era of three Judaean kings and four Assyrian kings. The later who sought to overrun the western Fertile Crescent that also included the Kingdoms of Israel (north) and Judea (south). Isaiah provides more than enough “markers” for us to know with certainty that he exercised his prophetic ministry from 740-701 BCE.

And yet, in Isaiah 44:28 (and 45:1), the prophet proclaims that Cyrus, King of Persia, will release the Jews from the Babylonian Exile, return them to the promised land and order that the city and the temple be rebuild. Jerusalem and the Temple were destroyed in 587 BCE with Cyrus conquering Babylon some 40 years later – in other words, 110-150 years after the prophetic ministry of Isaiah who preached to the three Judaean kings Jotham, Ahaz and Hezekiah. What are we to make of that? END_OF_DOCUMENT_TOKEN_TO_BE_REPLACED