Today we celebrate, remember, and honor all the saints, known and unknown.  The feast day has its own history of how it came to be. Back in the earliest days of the Church, we did not so much think of “saints” but rather martyrs were especially esteemed. It was very much a local event, as the local church celebrated the anniversary of a martyr’s death on the anniversary date and in the place of martyrdom. By the 4th century the list of martyrs had grown considerably with some martyrs being celebrated more universally. The Church was caught between its desire to remember and celebrate the martyr’s witness and death, an ever expanding geography, and the practical matter of finding days to set aside to celebrate. Very soon there was a movement to find a common day to celebrate martyrs that were important to the Church while leaving the local communities to set aside days for martyrs that loomed larger in local memory.

END_OF_DOCUMENT_TOKEN_TO_BE_REPLACED 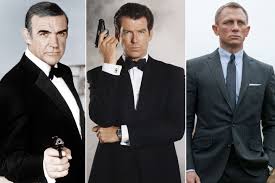 This morning in the parish office, someone mentioned that “James Bond had passed away.” Given there were 26 movies over 58 years and more-than-one actor who played the character, there could well be some ambiguity about who had died. Depending on your generation and affinity for the Bond movies, one might come to a different initial assumption of the recently departed. Possible assumptions include Daniel Craig, Pierce Brosnan, Roger Moore, Timothy Dalton, George Lazenby, Davide Niven, …but my mind went immediately to Sean Connery.  He was an actor that was simply memorable. For my part, other memorable roles included Indiana Jones’ father, in 1989’s “Indiana Jones and the Last Crusade”; his Academy-Award-winning (best supporting actor) performance as Chicago cop Jim Malone in the 1987 film “The Untouchables,” and one of my favorites, William Forrester in the 2000 film “Finding Forrester.”

Who was the best James Bond? I suspect it depends. When the world comes to consensus of the best Dr. Who and the best Capt. Kirk, perhaps the world will have also resolved the best Bond.

I don’t remember – it has been so long now – but somewhere, sometime ago, I began to start emails, letters, cards and the like with the same phrase: “May the grace and peace of Christ be with you.” It is an expression that begins many of St. Paul’s letters, in one form or another, e.g., Galatians 1:3. It is not a scripted beginning; there is a great deal of intention about it. There are times when I am in a hurry, responding to emails, that I am reminded at the end to return to the beginning and insert the greeting. It often leads to editing of the email if there is some part that does not have grace or peace about it. END_OF_DOCUMENT_TOKEN_TO_BE_REPLACED

As you no doubt know, election management and subsequent counting of votes is under the control and province of the States – and each State has a different process for voting and counting votes. The folks at FiveThirtyEight.com (Nate Silver and crew) have put together a nice all-in-one-place summary that answers “when will votes be counted?” You can read the full article here: Just thought you might want to know.

Another article at the same website, Nate Silver suggests that despite all the different state’s reporting (e.g., Pennsylvania does not begin to count early votes until election day), there is a 70% chance that the overall results will be known by 3:00 am Wednesday morning. We’ll see.