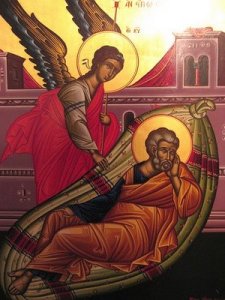 As part of his dream, the words of the angel of the Lord to Joseph are explained: “All this took place to fulfill what the Lord had said through the prophet: Behold, the virgin shall be with child and bear a son, and they shall name him Emmanuel, which means ‘God is with us.’” (Mt 1:22-23) The prophet of whom the evangelist speaks is Isaiah. The specific narrative is the prophet’s interactions with King Ahaz of Judah (Isaiah 7:10-14)

Ahaz was the great-great-grandson of Saul, the first king of the tribes of Israel. And here is his dilemma. In Isaiah 7 we are hearing about a military campaign of the Assyrian Empire (the seriously bad guys in the region) against an alliance of Syrians and some of the northern tribes of Israel (not necessarily the good guys). The alliance wanted Judah and King Ahaz to join the alliance. And even though Assyria would probably eventually turn their attention to Judah, as yet Ahaz had no quarrel with Assyria – so he refused. The tribes of the north and Syria then attempted to overthrow Ahaz and replace him with a king more amenable to their wishes. I told you they weren’t the good guys.

So, what’s Ahaz going to do? Rely on God, right? Well… Ahaz is not one of the good guys either. He had placed pagan altars in the Jerusalem Temple, allowed Canaanite cults to celebrate there, revived a cult of child sacrifice, and more. As 2 Kings says, “he did not do what was right in the eyes of the LORD …”

The only “good guy” in all this is the prophet Isaiah. It is Isaiah’s job to convince Ahaz to trust God and not his own political guile, military alliances, or bribe money. Isaiah’s advice to the king is startling. He does not suggest the course that Ahaz would eventually take, to appeal to Assyria for help (2 Kings 16:7). Instead, he tells him to “remain tranquil and do not fear” (7:4) because the attack will not succeed and the state of northern Israel will soon come to an end. The divine commitment to make the Davidic line “firm” (2 Sam 7:16) is conditional on the faith of the king.

That’s the advice and then Isaiah goes for “the close.” Isaiah says to Ahaz: “Ask for a sign from the LORD, your God; let it be deep as Sheol, or high as the sky!” Long story, short, Ahaz wants no part of this offer or Isaiah’s advice. When he refuses, here is the reply:

Listen, house of David! Is it not enough that you weary human beings? Must you also weary my God? Therefore, the Lord himself will give you a sign; the young woman, pregnant and about to bear a son, shall name him Emmanuel. (Is 7:13-14)

And what Joseph experiences is the knowledge that Mary’s child is the fulfillment of the promise given to the covenant people of God. Even if Ahaz refused, a promise is a promise. Emmanuel – “God with us.”

Note: The mother is called an almah in the Hebrew, that is, a young woman of marriageable age, though not necessarily a virgin. The Greek translation of Isaiah used the word parthenos, which means “virgin” unambiguously, and this translation is cited in Matt 1:22–23 and formed the basis of the traditional Christian interpretation of this text as a prophecy of the birth of Christ. Isaiah was translated into Greek some 200 years before the birth of Jesus.