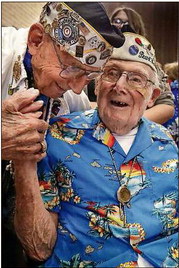 Clayton Schenkelberg passed away this week. He lived in a care facility in San Diego, CA. He is survived by five of his children and more than 40 grandchildren, great-grandchildren, and great-great-grandchildren. He was 103 years old – and oldest living survivor of the attack on Pearl Harbor

Born Oct. 17, 1917, in Carroll, Iowa, Schenkelberg knew hardship early on. His mother died when he was 9. The stock market crashed when he was 12, triggering the Great Depression. When he was 17, his father, a livestock salesman and grain-elevator operator, was killed in an accident.

In 1937, he followed an older brother into the Navy and was sent to Pearl Harbor and into torpedo work. He experienced one of the most fateful days in modern U.S. history, the Dec. 7, 1941, attack on Pearl Harbor that shoved the United States into World War II. On the morning the Japanese planes attacked, his shift was just ending. He was looking forward to spending the day with his girlfriend. Schenkelberg volunteered to drive a train loaded with underwater missiles away from strafing Japanese airplanes. Then he ran to an armory, grabbed a rifle and started shooting back.

After the war, he stayed in the Navy for another two decades, got married and raised seven children, and eventually settled in San Diego, where he had a second career as a high school custodian. His motto through the years: One day at a time. “If you asked him about any of it, he would tell you he was just doing what needed to be done,” his son Patrick said. “He didn’t think it was anything special. He had a job to do and he did it.”

Like so many service men and women who survived that day, they picked themselves up, helped win the war and then got on with their lives in a way that led them to be dubbed the Greatest Generation.

4 thoughts on “Rest in Peace”