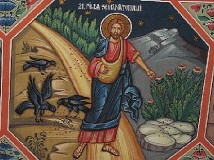 This coming Sunday’s gospel is the parable of the mustard seed. Of the three parables of seed which is sown this last is most elaborately introduced in explicit parabolic formulation: the Kingdom of God is like what happens to a grain of mustard. The mustard seed was proverbial in Jewish thinking as the smallest of all seeds. He said, “To what shall we compare the kingdom of God, or what parable can we use for it? It is like a mustard seed that, when it is sown in the ground, is the smallest of all the seeds on the earth. But once it is sown, it springs up and becomes the largest of plants and puts forth large branches, so that the birds of the sky can dwell in its shade.” (Mark 4:40-32)

Mark’s explanatory phrase, “when it is sown in the ground, is the smallest of all the seeds on the earth” may be understood as a gloss to inform his readers in the West of this underlying assumption. Unlike the previous parable, there is no real reflection upon the actual growth of the seed. All attention is focused upon the contrast between the smallest of the seeds and the tallest of the shrubs. By the Lake of Gennesaret, the mustard shrub attains the height of eight to ten feet. The birds are attracted by the seed and the shade.

But notice that he Kingdom is not likened to the mustard seed, but to what happens to the mustard seed. The whole life of the plant provides the basis of the comparison. The reference to the birds of the air which find shelter in the branches of the mustard shrub may have a deeper significance. Echoes of the OT may be responsible for this formulation; the LXX of Ezek 17:23 has birds “under its shade” rather than “in the shade” of the tree.

Matthew 13:31–32 and Luke 13:18–19 represent another version of the parable in which a person sows the seed, which grows into a tree. The shade or shelter provided by the bush has been replaced by the branches as a place for the birds to make their nests. This variant highlights the OT use of great trees to depict the kingdoms of the world (Ezek 17:23; 31:6; Dan 4:12, 20–22). The great tree in Dan 4:20–22 corresponds to a kingdom that rules all the peoples of the world. The image of a mighty cedar of Lebanon symbolizes Assyria (Ezek 31:2) and Judah (Ezek 17:3–4). Thus it must have seemed contradictory to use the image of a bush to represent the kingdom of God. Changing the image for the kingdom from a bush to a tree (Mt and Luke) emphasizes that the kingdom of God is greater than all human kingdoms.

In order to explain how the bush provides shelter for all the birds of the air, Mark observes that the full-grown bush has large branches. Even when fully grown, the kingdom of God does not appear unusually large if it is compared to great trees. Yet, as bushes go, the mustard bush is the greatest. Birds that nest on the ground are sheltered by its branches. Jesus may have told this parable to counter the impression that God’s rule had to appear among the great and powerful. It may have been an expression of God’s providence in creation (Ps 104:12; Matt 6:26–30).

Mark uses the parable to conclude the discourse on parables. The certainty with which small mustard seeds take over the tilled soil into which they fall contrasts with the precariousness of the seed scattered by the sower and the mysterious appearance of the harvest from the seed that grows of itself. The overtones of divine judgment attached to the harvest in the two earlier parables are also missing. Thus this parable suggests that the secret of the kingdom of God can be found by Jesus’ disciples in their present experience. God has already provided protection for the faithful. The next episode, a rescue at sea, joins the Christology of Mark with the certainty of God’s protection for suffering disciples. Jesus makes God’s salvation present just as his preaching announces the coming of God’s rule.

This parable is concerned with the enigmatic present manifestation of the Kingdom as embodied in Jesus’ person. Its appearance may be characterized by weakness and apparent insignificance—but remember the mustard seed. The day will come when the Kingdom of God will surpass in glory the mightiest kingdoms of the earth, for it is the consequence of God’s sovereign action. The mustard seed is the word of God proclaimed by Christ. This word possesses the power which one day will make all things new. When the glory of that manifestation breaks forth before all they will be as startled as the one who considers the tiny mustard seed and the mighty shrub.