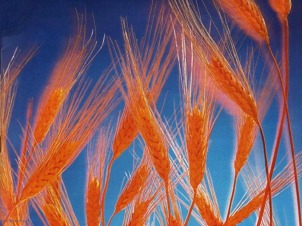 Today’s gospel, the explanation of the parable of the weeds in the field, almost begs the question…. where is the parable? The parable was Saturday’s gospel. When asked to explain the parable, Jesus’ answer is to the point and stark: “He who sows good seed is the Son of Man, the field is the world, the good seed the children of the Kingdom. The weeds are the children of the Evil One, and the enemy who sows them is the Devil. The harvest is the end of the age, and the harvesters are angels. Just as weeds are collected and burned up with fire, so will it be at the end of the age” ….at the end of the age.The landowner (God) is quite patient and accepts that there will be “weeds” among the harvest – it is the lot of the human enterprises. Some people do not/will not/cannot hear the Word sown in to their lives. The laborers in the parable are quick to want to eradicate the poison. I think history has shown that we reach beyond our calling – not to simply point out error – but to extinguish the source and root of that error. In the first centuries of the Church, when some of the epic battles over theological orthodoxy and heresy were waged, executions were not part of the Church’s response. There might be condemnation, banishment and loss of position, but people were not put to death. Yet a millennia later the island nation of England has its book of Protestant and Catholic martyrs as witness to our human reaction to “weeds” among us, despite the Gospel message.

In marked contrast to the forbearance and patience of God, there is a tendency among his creatures to distinguish, discriminate and, all too often, to disparage and even to dispose of one another. Differences which are perceived as a measure of weakness or a diminishment of personal worth have unfortunately proven to be sufficient impetus for provoking some of the darkest periods in the history of humankind.

In an effort to separate “good” from “bad”, or the law-abiding from the insurgents, Claudius forced a separation and commanded all Jews to leave Rome (ca. 49-50 C.E.). Centuries later, Jews would be similarly expelled from Spain (1492). Later yet, and in an act of unique horror, Adolf Hitler attempted to definitively separate and annihilate every Jewish person in order to construct what he perceived to be a superior race. When he was finally stopped in 1945, only 3,000,000 out of a population of 9,000,000 Jews in Europe remained alive. Millions of non-Jews were also killed during the third Reich, their only crime being the fact that they were judged as different and therefore lesser than their persecutors.

During the Middle Ages (ca. 1150 C.E.), formal investigative tribunals were established with an eye to safeguarding the integrity and authenticity of the faith. But when Pope Innocent III declared heresy a capital time in 1199 C.E. and when the Fourth Lateran Council (1215 C.E.) provided secular punishment for heretics, all manner of cruelty and injustice ensued. Inquisitors were ruthless in their prosecution of those whose ideas ranged anywhere from the truly heretical to the merely diverse. Those alleged to be heretics had no rights; they were forced to prove their own innocence without benefit of counsel.

Similar attempts at separating those judged to be orthodox from those who were not resulted in the infamous witch trials which swept Europe from the thirteenth to the early eighteenth century and crossed the Atlantic to take hold in the Americas in the seventeenth century. Religious intolerance perpetrated the torture and deaths of actual practitioners of black magic, necromancy, etc. as well as others who were accused simply because they happened to have red hair, or who, because of nervousness may have stumbled through the Lord’s Prayer.

Segregation and separation of peoples because of their different ideas, or social mores, has been a blight on the visage of humanity for centuries.